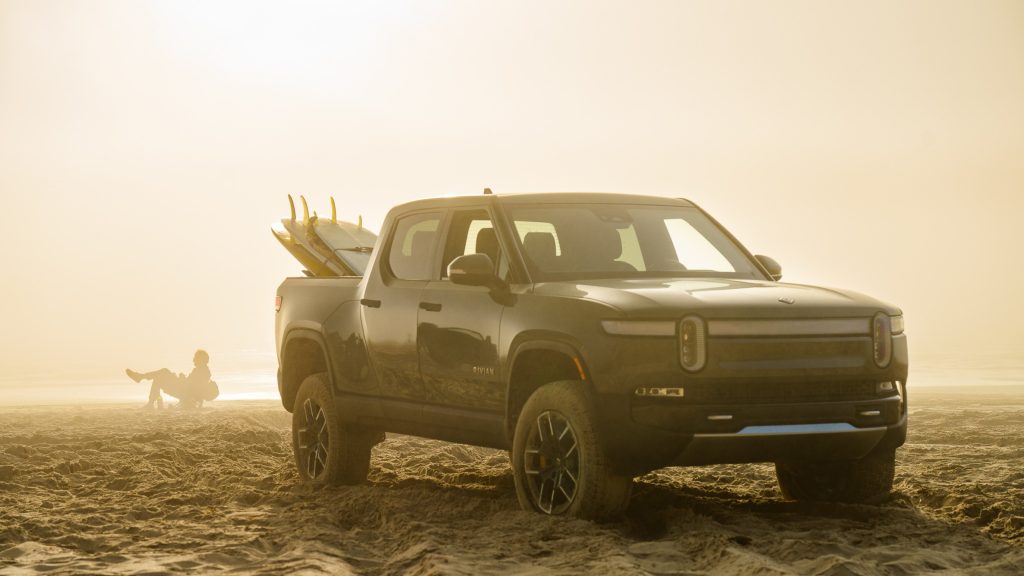 Other EV stocks like Lion Electric, Canoo, Fisker, and Nikola are also a tad short of their record lows. Even Tesla stock has slumped this year and its market cap has now plunged below $350 billion. To put that in perspective, its market cap was above $1.2 trillion at the peak last year.

Tesla is now heading for not only its worst month but also the worst quarter as well as year on record. The stock, which joined the S&P 500 index in 2020 only, would end up being among the worst losers in the index this year.

Rivian stock fell 7.3% yesterday and closed at $17.74, a new record low for the company. Its market cap is now just above $16 billion. The company went public last year and priced the IPO at $78, and became the biggest IPO since Facebook. The stock hit an all-time high of $179.47 and Rivian’s market cap surpassed $150 billion.

Even Musk raised alarm bells over Rivian’s soaring valuations. Notably, Rivian’s market cap surpassed that of Ford. The stock’s bumper listing also catapulted other EV stocks and Lucid Motors also hit its all-time high after Rivian’s IPO. Lucid’s market cap almost hit $100 billion. While some saw the soaring valuations of EV stocks as a reflection of growing demand for electric cars, others termed it as a bubble.

Fast forward to 2022 and the EV bubble finally seems to have burst. Tesla, which at its peak was worth more than all leading automakers combined, is now valued at just around 1.5x Toyota’s market cap.

As for Rivian, its market cap of $16.3 billion is almost a tenth of what it was at the peak. The company reported cash and cash equivalents of $13.8 billion at the end of September. Arrival’s market cap is below the cash on its balance sheet. This goes to show how pessimistic markets are about the outlook for some of the EV names.

While Rivian opted for a traditional IPO, almost all other EV startups went public through SPAC reverse mergers.

The tide for SPACs started to turn in the back half of 2021. In a way, the success of SPACs worked to their nemesis. In a typical demand-supply mismatch, it seemed that there were more SPACs hunting for targets than companies looking to go public. As companies received interest from multiple SPACs, they invariably sought a higher valuation. Many SPAC mergers, including those involving EV companies, looked doomed from the onset given the high valuations. 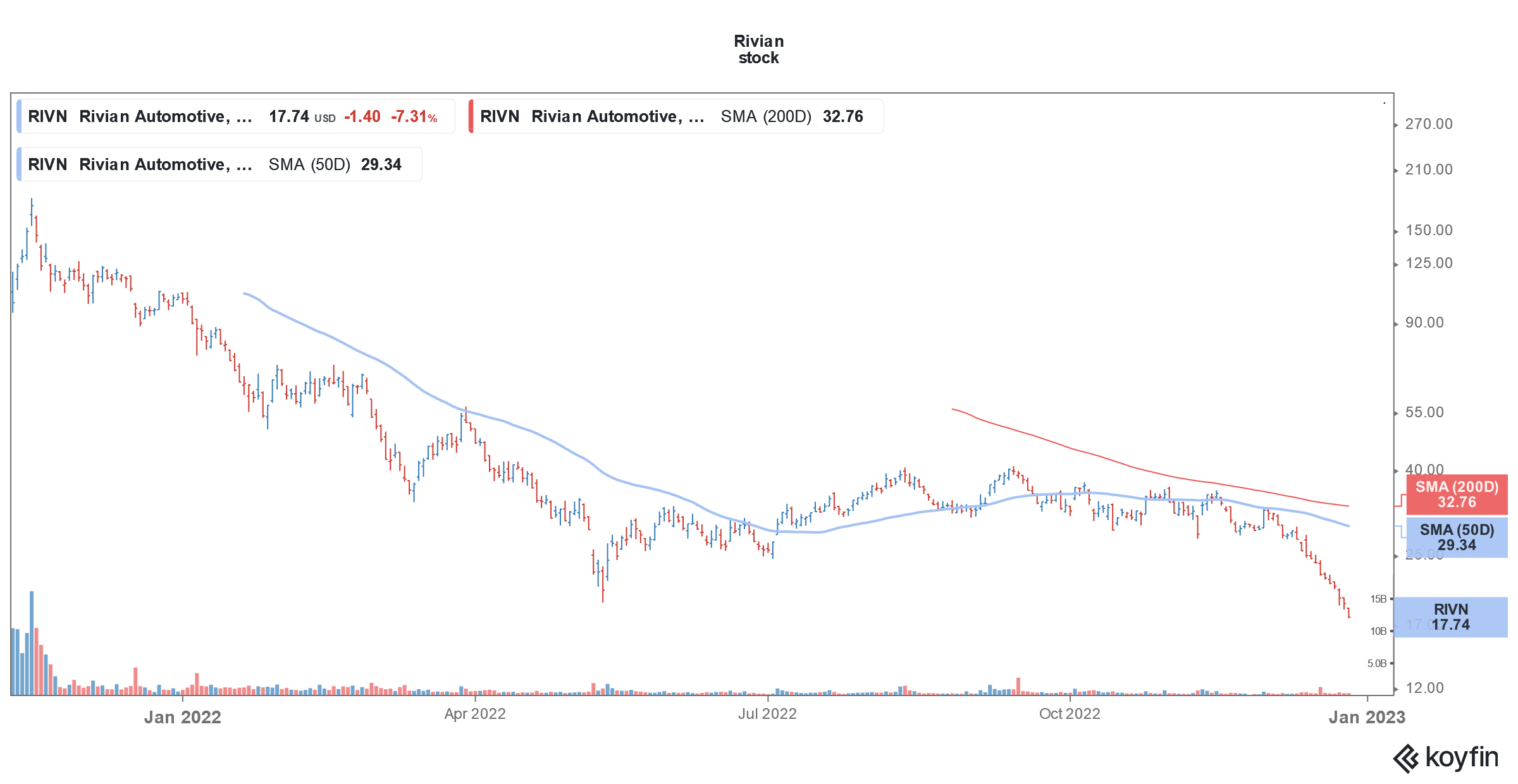 In its annual reshuffle, the Nasdaq 100 added Rivian along with a few other stocks. While stocks generally rise on news of getting added to major indices, Rivian continued to plummet amid the EV slump.

Like fellow startup EV companies, Rivian is also posting losses. It posted a net loss of $1.74 billion in the third quarter of 2022 which was similar to the previous quarter. Its per-share loss came in at $1.57, which was better than the $1.79 per-share loss that analysts were expecting.

Rivian maintained its 2022 production guidance of 25,000 cars which would mean that it would need to produce 11,000 cars in the fourth quarter. Rivian said, “The demonstrated production rates within our Normal factory continue to give us confidence in our systems, equipment and team members’ ability to ramp our production lines.”

It remains to be seen whether Rivian would be able to meet its production guidance. However, yesterday, Chinese EV company NIO lowered its fourth-quarter delivery guidance.

It now expects to deliver between 38,500-39,500 cars in the quarter. Previously, the company had guided for deliveries between 43,000-48,000 in the quarter which implied record deliveries in December.

Commenting on the delivery outlook, NIO said, “In December 2022, the Company has been facing challenges in deliveries and productions, together with certain supply chain constraints, caused by the outbreak of the Omicron coronavirus variant in major cities in China.”

While Rivian has a strong balance sheet, it is still being prudent with its capex and paused its deal with Mercedes-Benz to produce electric vans in Europe. It is however working to ramp up production in the US.

Rivian is targeting a total annual production capacity of around 600,000 cars between its Normal and Georgia plants. It aspires to capture 10% of the global automotive market share which might seem a tall ask considering the massive competition. The company is currently producing the R1T pickup, R1S SUV, and EDV (electric delivery van). At the upcoming factory in Georgia, Rivian would produce the affordable R2, whose launch it delayed by one year to 2026.

Lucid Motors recently completed a $1.5 billion stock offering. Nikola also raised cash by selling shares. Lucid Motors ended the third quarter with $3.85 billion in cash and cash equivalents. It said that the cash is sufficient to fund its operations until the end of 2023. The recently completed stock sale would help the company bridge its cash burn. Along with its factory in the US, LCID is contemplating setting up a second plant in Saudi Arabia.

Overall, the slump in EV stocks amid demand concerns is taking a toll on companies like Rivian. Analysts are meanwhile bullish on Rivian given its product portfolio and backing from Ford and Amazon. Amazon has also placed a massive order with Rivian and is the largest shareholder in the company.

However, for now, Rivian looks in the penalty box amid the pessimism toward loss-making growth stocks. The concerns over EV demand and the slump in Tesla, whose valuation was a benchmark for other EV stocks, are not helping matters either.