Most people know Google as the most used search engine in the world and, indeed, Google.com records approximately 8.7 billion monthly visits, according to Similar Web, which obviously makes it the most visited website in the world.

But Google is more than just a search engine. The company provides a broad range of internet services that include web and mobile app email (Gmail), cloud storage for businesses and consumers, GooglePlay, YouTube, a news aggregator, a web browser (Google Chrome), self-driving cars, Google Android, computers, and the language translation service.

Due to the wide range of services and applications, Google’s stock is one of the best stocks to own these days. So, if you are thinking about buying Google (Alphabet) stock, you have landed in the right place. In this article, we will show you the the basics of how to buy Google’s stock, review three top brokers that offer this stock, and provide information regarding Google’s company and its stock performance.

eToro is the largest social trading platform in the world that specializes in online trading. One of eToro’s distinguishing feature is its ability to enable traders to buy more than 2000 stocks through popular stocks exchanges or the CFD market. If you decide to use eToro to buy Alphabet (Google) non-leveraged shares, you will have no commissions – no markup, no ticket fee, and no management fee.

The second option is to buy Alphabet (Google) stocks contract for difference (CFD), which allows you to use a leverage position of up to 1:30 for retail clients. The platform also features essential data on a specific stock page. For example, on the Alphabet (Google) stock page, you will be able to view Google-related posts from other members, crucial information about Google (overview, financial information, and profile), charts, and the research feature.

eToro is extremely popular for its social trading platform and Copy Trading feature. The community has more than 4.5 million members that can share trading ideas, and copy trades of other users.

In terms of security and regulation, eToro holds licenses from top-tier regulators such as the FCA in the United Kingdom, CySEC in Cyprus, and ASIC in Australia. This ensures that your funds are kept safe in segregated accounts and that eToro complies with major regulatory requirements.

Plus500 is a leading broker that specializes in offering stock CFDs. Authorized and regulated by the FCA, ASIC, and CySEC, Plus500 has excellent trading terms when it comes to stock trading including Alphabet (Google). When you are trading Google on Plus500, you will be buying the stock via a contract for difference (CFDs).

Furthermore, Plus500 features several risk management tools including the negative balance protection, guaranteed stop order, and trailing stop orders, which can be useful for day traders.

While eToro allows you to get market updates from real traders on its social trading platform, Plus500 has an email and push notifications on market events as well as alerts on price movements on a specified instrument. On the negative side, Plus500 does not provide the MetaTrader4 nor the MetaTrader5, however, its trading platform is intuitive and user friendly. 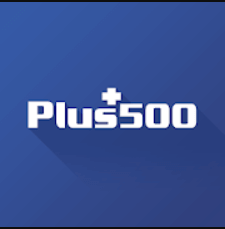 Founded in 2015, Stash Invest is a new trading app registered by the Securities Exchange Commission (SEC) in the United States. Stash Invest makes it easy to start trading a selection of more than 1800 stocks and Exchange Traded Funds (ETFs) with a minimum deposit of $5. The platform is suitable for traders in the United States who wish to invest small amounts in order to buy stocks including the Alphabet (Google) stock. Stash is different in the way that it offers users to buy fractional shares so you can trade a small portion of Alphabet stock. Keep in mind that stocks or funds dividends will be automatically reinvested via the DRIP tool.

The bottom line, Stash Invest is an excellent platform for beginner investors in the United States that wan to easily execute orders in the market without having special trading skills and knowledge.

How to Buy Alphabet (Google) Stock

eToro is one of our top choices to buy GOOG stock due to various reasons. Simply follow the steps below to complete your Alphabet (Google) stock purchase.

Note: You will first need to open an account, upload your ID, and deposit some funds. You can then proceed to buy Alphabet (Google) stock in a matter of minutes!

Once you have completed the account creation process and your account has been approved, log in to the trading platform and search for Google stock on the top search box.

Next, you will be transferred to Google’s stocks page where you can view feeds from twitter, stats, charts, and research tab. Then, click on the ‘Trade’ button to continue.

To complete your order, click on the ‘Set Order’ button.

Why Do People Invest in Alphabet (Google)?

As we mentioned above, Alphabet (Google) is not just a search engine as the company’s efforts to expand its services to new fields and regions across the world. In recent years, Google has been investing a lot of resources in order to develop new products and applications that include the Google Maps, Google Assistant, Android, YouTube, Google Chrome, Google Drive, Google Analytics, Google Translate, Google’s autonomous car, Google Play, Google Music, etc.

Note: Never purchase shares in Alphabet (Google) – or any company for that matter, without doing your own research. The positive investment notes listed below are subjective, so there’s no guarantee that the Alphabet (Google) stock will increase in value. In fact, you could just as easily lose money.

Google has recently reported earnings for its first quarter of 2020. The company had revenue of $41.2 billion, a net income of $6.8 billion, and earnings per share (EPS) of $9.87. The Alphabet was surpassing revenue estimates but missed analysts’ expectations on earnings. As a result, Alphabet shares rose as numbers include the impact of the coronavirus pandemic.

As we mentioned above, Alphabet (Google) is not just a search engine as the company’s efforts to expand its services to new fields and regions across the world. In recent years, Google has been investing a lot of resources in order to develop new products and applications that include the Google Maps, Google Assistant, Android, YouTube, Google Chrome, Google Drive, Google Analytics, Google Translate, Google’s autonomous car, Google Play, Google Music, etc.

If you believe that Artificial Intelligence technology will change the world, then you should believe in Alphabet (Google). Last year, the company has announced the TensorFlow, an open ­source platform for machine learning. Moreover, Google has also announced a huge breakthrough in its quantum computing when it reached a revolutionary milestone in October.

Google started as a research project by Larry Page and Sergey Brin in 1996 at Stanford University in Stanford, California. The company was officially founded on September 4th, 1998 at Menlo Park California United States and went public on August 19, 2004. Page and Brin first named the company BackRub but changed it to Google after a misspelling of the word Googol which refers to a famously huge number (equals to 1 followed by 100 zeros).

On August 19, 2004, over 19,605,050 stocks were issued on the NASDAQ stock exchange at a price of $85 per share. On August 18, 2005, another 14,25,265 shares were offered to the public. In 2014, Google has created two classes of shares; Class A Shares (SYMBOL: GOOGL) and Class C Shares (SYMBOL: GOOG). The main difference between the two classes of shares is the first has voting votes while the second has no right to participate in voting.

Google shares were first offered to the public on August 19, 2004, at a price of $85 per share. Since then, the stock has been on a long-term uptrend, with an all-time high of 1524.87 on February 19, 2020. Like any other company in the world, the coronavirus pandemic had an impact on Google, however, Alphabet remains one of the most valuable companies in the world. Even though the coronavirus crisis is hurting Google’s (and YouTube) advertising which caused a drop in the stock’s price, Google’s revenue continues to rise. In the first quarter of 2020, Google’s total advertising revenues rose to $33.76 billion from $30.59 billion in 2019. 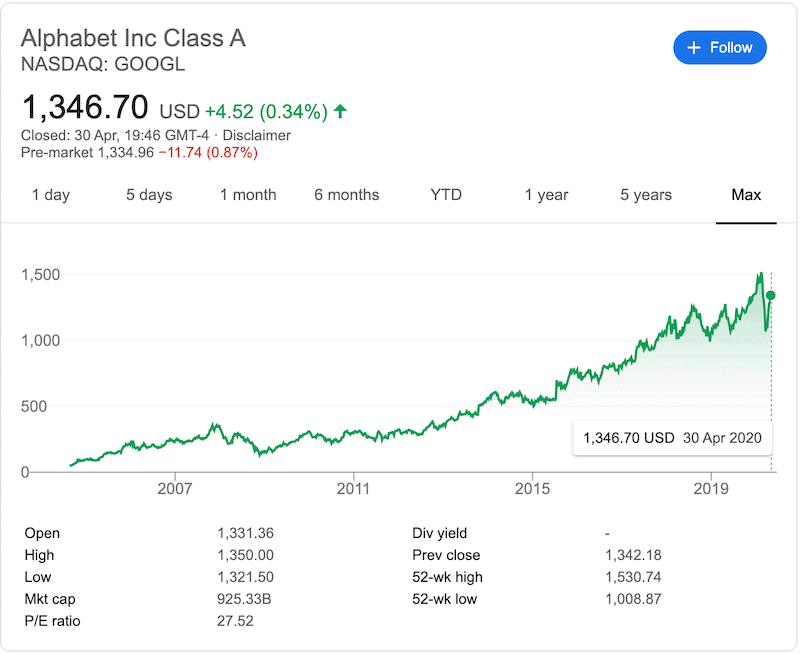 Google’s main income is from advertisements. As a matter of fact,  82% of the Alphabet’s total revenue was made by Google advertising in the first quarter of 2019. But Google’s strength might be that the company continues to expand to new industries and technologies such as cloud computing, Artificial Intelligence, autonomous cars, and operating systems.

In recent years, Google has been part of the FAANG stocks group, a term that was coined by Jim Cramer, the host of Mad Money on CNBC. FAANG refers to the stocks of five big tech American companies: Facebook (FB), Amazon (AMZN), Apple (AAPL), Netflix (NFLX); and Alphabet (GOOG). Even though there’s a discussion about whether Google stock is overpriced, the company has shown resilience and continues to expand exponentially.

How much were Alphabet (Google) stocks originally?

When Google went public in 2004, the company offered its shares at a price of $85. One year after the initial IPO, on August 18, 2005, Google announced another round of public offering at a market price.

Is Google and Alphabet the same company?

In 2015, Google renamed itself to Alphabet and created a subsidiary company called Google. Alphabet Inc., in fact, is run by Google's co-founders Larry Page and Sergey Brin and has additional businesses that include Waymo, X Development, Calico, Nest, Verily, Fiber, Makani, CapitalG, and GV. When you buy GOOG stock, you are in fact buy Alphabet incorporation

What stock exchange is Alphabet (Google) stock listed on?

What is the symbol for Alphabet (Google) stock on NASDAQ?

Can I short Alphabet (Google) stock?

Yes you can. CFD brokers such as eToro and Plus500 allow you to short-sell stocks, including the Alphabet (Google) stock.

Tom is an experienced financial analyst and a former derivatives day trader specialising in futures, commodities, forex and cryptocurrency. He has a B.A. in Economics and Management and his work has been published on a range of publications, including Yahoo Finance, FXEmpire and NASDAQ.com.