Ford stock was trading sharply higher in pre markets today after posting better than expected earnings in the third quarter. Stock prices of legacy automakers like Ford, General Motors, and Volkswagen have sagged over the last year even as electric vehicle stocks have risen sharply. Can legacy automakers stage a comeback and Ford stock rise more? Let’s discuss this.

“We haven’t suddenly fixed the issues in our automotive business, but we have a clear turnaround plan to get that done,” said Ford’s president and CEO Jim Farley. “That work is underway and we’re making progress,” added Farley who took over the position earlier this month only.

Ford posted an adjusted EPS of 65 cents per share which were far ahead of the 19 cents that analysts surveyed by Refinitiv were expecting. It posted an adjusted EBIT (earnings before interest and taxes) margin of 9.7% which was almost five percentage points above the corresponding quarter in 2019. The margin was also above the 8% that Ford intends to target sustainably over the long term.

The key driver of Ford’s strong third quarter earnings was the strong performance of the North America Automotive segment. The segment had a favorable product mix and pricing in the quarter and posted an EBIT margin of 12.5%.

Over the last couple of years, Ford has deliberately scaled down its business in sedans that are less profitable and pivoted towards the more profitable SUVs and pickup trucks. The company’s F-Series of pickup trucks have been America’s best-selling pickup for years. In the third quarter, the F-Series gained 1.7% market share in the US market.

In 2015, Ford revamped the F-Series pickup with an all-aluminum body. It was a big gamble from the company given the fact that it is the companies most profitable model. However, the model received a good response. Ford is also coming up with an all-electric model of the F-150 that should be available in 2022. The model would take on Tesla’s Cybertruck. 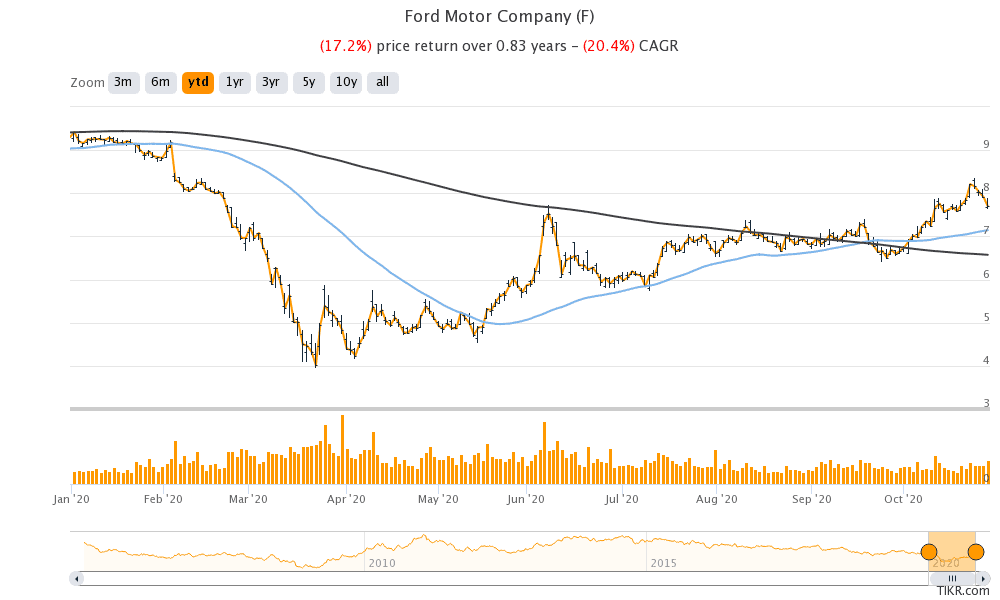 Legacy automakers have been investing heavily in electric vehicles whose sales are expected to soar over the next decade. Ford would unveil its all-electric Transit van for global markets next month.

“By the end of the year, customers will be able to choose from 12 hybrid and fully electric vehicles around the globe and there is much more to come, including developing a complete EV ecosystem,” said Farley. He added, “We intend to set Ford apart in EVs (electric vehicles) with capabilities that reach across our product portfolio, like an all-electric F-150 in 2022 that will be a rugged and affordable work pickup, not just a lifestyle vehicle.”

Meanwhile, investors have poured money into electric vehicle stocks this year valuing them as tech companies and not as automotive companies. Tesla’s market capitalization exceeded the combined market capitalization of Toyota Motors, Volkswagen, Ford, General Motors, and Fiat Chrysler amid the rally in its stock price.

In the fourth quarter, Ford expects its adjusted EBIT to be between break-even and a loss of $500 million. Looking at the guidance, the company would be EBIT positive in 2020 despite the COVID-19 pandemic.

The key drivers for lower fourth quarter earnings are lower expected wholesale shipments of the F-150 as the company ramps up the production of the new 2021 model. Also, Ford expects higher costs in the quarter amid the manufacturing launch of Bronco Sport and Mustang Mach-G.

No word yet on dividend

Earlier this year, Ford suspended its dividend due to the pandemic. Addressing an analyst question on the resumption of dividend, Ford’s chief financial officer John Lawler did not provide a timeline. He said “I think we need to have that framed up in our total capital strategy and calls on capital and where we’re headed as a business. And I think next spring would be the time to do that.”

Ford stock is down 17.2% so far in 2020 and has underperformed the S&P 500. According to the estimates compiled by CNN, Ford has a median price target of $8.25 which is a premium of 7% above current prices. Its highest price target of $10 is almost 30% above its current stock price.

Of the 17 analysts covering Ford stock, only four have a buy rating while an overwhelming majority of 12 analysts have rated it as a hold. One analyst has rated it as a sell.

That said, if Ford’s upcoming electric vehicles especially the F-150 can gain popularity, it would help the stock move much higher. Its valuation multiples also look reasonable with an NTM (next-12 month) price to earnings multiple of 12.6x.

You can buy Ford stock through any of the reputed online stockbrokers. Alternatively, if you wish to trade derivatives, we also have reviewed a list of derivative brokers you can consider.