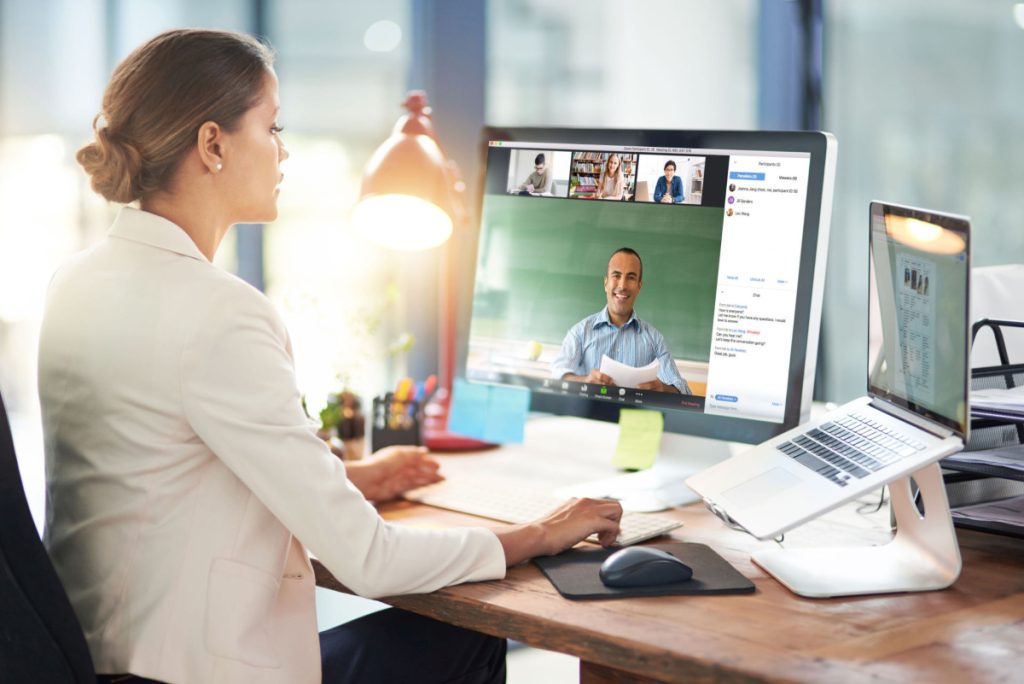 Zoom Video Communications (NYSE: ZM) released its earnings for the fiscal third quarter of 2023 yesterday after the markets closed. While its earnings were better than expected, it lowered its full-year guidance.

Zoom reported revenues of $1.1 billion which were 5% higher than the corresponding quarter last year and were in line with what analysts were expecting. In the previous quarter, the company’s sales had risen 8%.

Zoom said that at the end of October, it had 3,286 customers who contributed more than $100,000 to its trailing 12-month revenues. The metric increased 31% YoY. It reported a 31% trailing 12-month net dollar expansion rate for Enterprise customers. Zoom’s CEO Eric. S Yuan said, “In Q3, we drove revenue above guidance with continued momentum in Enterprise.”

He however cautioned that the company continues to see “heightened deal scrutiny for new business.”

Meanwhile, Zoom’s online revenues fell 9% YoY to $487.6 million. It reported an Online average monthly churn of 3.1%, which was 60 basis points lower compared to the corresponding quarter last year. During the earnings call, ZOOM CFO Kelly Steckelberg said, that the Online business was having “a dampening effect on the overall growth rate of the company.”

She however said that the company expects Enterprise customers to be an even bigger contributor to its revenues over time. 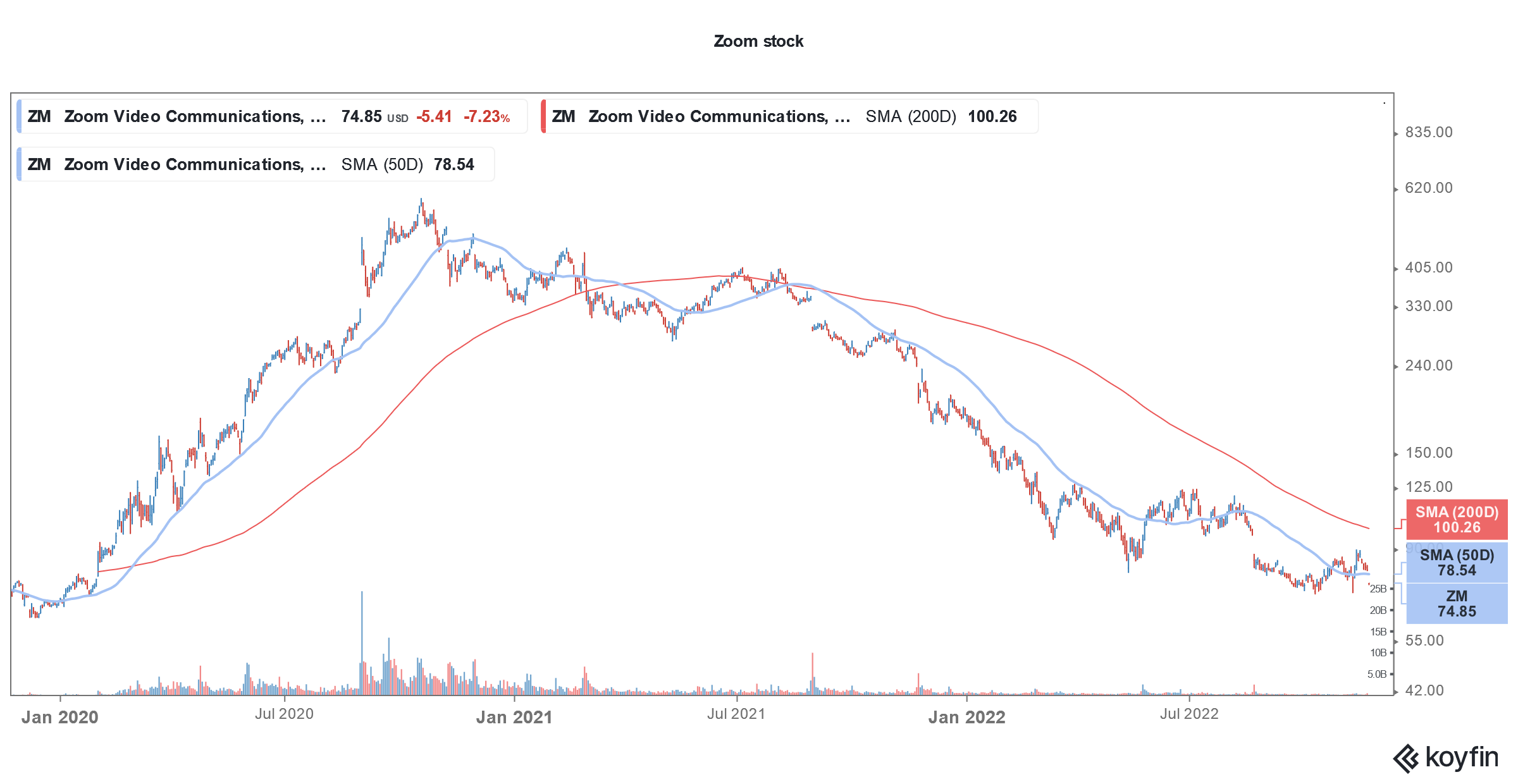 Zoom ended the fiscal third quarter with total cash and cash equivalents of $5.2 billion. The company is actively looking at potential acquisitions. Steckelberg said, “The compression in valuations is not lost on us.”

Notably, given the crash in valuations of growth companies, both listed and private, cash-rich tech companies are actively scouting for acquisitions. Zoom has also repurchased almost $1 billion of its shares this year

ZM lowered its full-year revenue guidance to $4.38 billion. For the fiscal fourth quarter of 2023, it forecast revenues between $1.095 billion to $1.105 billion, which was below what the street was expecting. It forecast EPS between 75-78 cents, which was again lower than the 81 cents that analysts were expecting.

Steckelberg said, “This outlook is consistent with what we are observing in the market today. Specifically, it assumes that our enterprise business will grow in the low to mid-20s, while our online business will decline approximately 8% for the year.”

Former stay-at-home winners like Zoom, Chegg, and Teladoc Health are witnessing a severe growth slowdown. Taking about ZM, the demand for the company’s services has come down as the economies have reopened. Also, there is increased competition, including from Microsoft Teams.

Citi analyst Tyler Radke is bearish on Citi stock. After the earnings release, he said, “Despite some modest revenue upside, the leading indicators suggested signs of incremental deterioration.”

Notably, last week only, Radke lowered Zoom’s target price from $76 to $72 and maintained his sell rating.

In a client note, Radke said, “ZM’s post-COVID recovery, may continue to falter in Q3 as tightening IT budgets and a weaker macro outlook keep SMB new customer acquisitions low and churn elevated.” He added, “We see the hurdles from last Q holding, with rising competition (MSFT/Teams), macro-related weakness, and further margin risk from mix shift.”

Radke also lowered the company’s earnings estimate and said, “We further cut our estimates (Q4+ FY24), with revised revenue and FCF still 9% and 2% below the street in FY24. We forecast near flattish revenue growth next year with slight FCF growth.”

Meanwhile, Cathie Wood of ARK Invest has doubled down on ZM stock this year and it is now the biggest holding for her flagship ARK Innovation ETF (NYSE: ARKK) accounting for 9.73% of the portfolio.

Tesla, another long-time Wood favorite, is now the ETFs second-largest holding. Usually, the Elon Musk-run company is the largest holding for the ETF. ARK ETFs have crashed this year amid the Fed’s relentless rate hikes.

Wood believes that the Fed is making a mistake with its aggressive interest rate hikes and could end up causing an economic “bust.” Contrary to what many believe, Wood has long stated that the US economy is headed for deflation.

The US Fed has been on a rate hike spree and has raised rates six times this year. Also, at the last four meetings, the Fed has raised rates by 75 basis points each. Fed’s rate hikes have taken a toll on US stocks and the Nasdaq is trading near a two-year low.

Meanwhile, while Wood was among the star fund managers in 2020 as the rise in stay-at-home winners lifted her ARK ETFs, the funds have sagged in 2022.

Zoom stock is trading lower in US premarkets today which would further add to the woes of ARKK.