UK in talks with Japan over 5G after Huawei ban 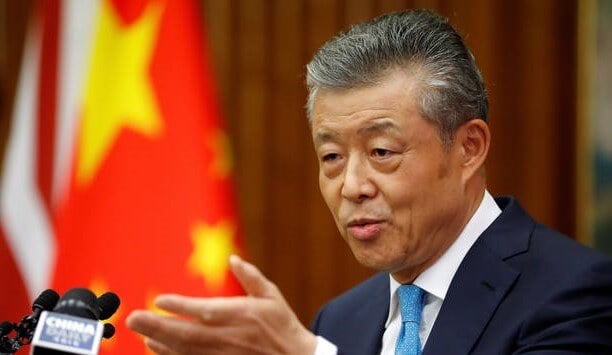 The UK has asked Japan for help with 5G network, days after banning the use of kit from Huawei from the country, joining an increasing list of countries that are shunning Chinese telecoms giant

Last Tuesday, the UK banned mobile providers from buying new Huawei 5G equipment at the year of this year, they must also remove all the firm’s 5G kit from their networks by 2027.

The growing mood to avoid Huawei 5G kit has been growing globally especially after the US President Donald Trump’s administration imposed new sanctions in May limiting Huawei’s access to US chip technology. America, Australia and Canada have already banned the Chinese telco from taking any part in the building of their superfast 5G networks.

“I think the UK should have its own independent foreign policy rather than to dance to the tune of Americans like what happened to Huawei,” China’s UK ambassador Liu Xiaoming (pictured) told the BBC’s The Andrew Marr Show on Sunday.

Huawei is the global leader in 5G deployment primarily due to the low cost of its products. Trade title Light Reading reported in February that Huawei has 91 5G deals under its belt including 47 in Europe. Ericsson comes second with 81 deals while Nokia ranks third with 67 deals. Overall, these three companies hold a formidable 80% share of the 5G base station market. Japanese companies NEC and Fujitsu are distant competitors with less than 1% market share.

The Japanese government is investing over $650m to support domestic companies develop backbone 5G networks and base station equipment. In a related move, the country is paying at least $536m to Japanese companies that plan to leave China to either move back operations to Japan or to other Southeast Asian countries.

Jio, the Indian telecom giant led by billionaire Mukesh Ambani, has roped in several US multinational giants including Intel and Qualcomm and is ready for end to end 5G deployment. US Secretary of State Mike Pompeo commended Jio along with some others who are shunning Huawei and called then “Clean Telcos.”

The pandemic coupled with anti-China sentiments has taken a toll on Huawei and the company reported the slowest first-half growth in seven years. Huawei’s troubles have been a boon for rivals and Ericsson is up 17% so far in July. Nokia stock, however, is trading flat for the month but is up 18% for the year.