Ford (NYSE: F) yesterday announced a price hike for its F-150 Lightning model. This is the second price hike for the all-electric model of its best-selling F-150 pickup truck in two months and comes amid inflationary pressures.

Ford started delivering the F-150 pickup earlier this year only and the model had a starting price of $40,000. However, given the inflationary pressures, the company has had to increase its prices.

To be sure, Ford is not the only automaker that has raised car prices. Tesla also increased prices across all the models in the US. Even startup EV (electric vehicle) company Rivian announced a price hike. However, Rivian irked buyers by raising prices even for those customers who had already booked their cars. The company had to subsequently waive the price hike for those buyers who had already booked their cars.

Automotive companies globally are grappling with high inflation as well as supply chain woes. Most automakers are saddled with partially built cars due to the shortage of critical parts, especially chips. The chip shortage situation continues to take a toll on US automotive production.

In September, Ford delivered 142,644 cars in the US which was 8.9% lower than the corresponding month last year. While its EV deliveries almost tripled to 4,691 it is a fraction of Tesla.

Last month, Ford warned that high inflation would dent its third-quarter profits by $1 billion. The company however maintained its full-year EBIT guidance of $11.5-$12.5 billion. It said, “The supply shortages will result in a higher-than-planned number of “vehicles on wheels” built but remaining in Ford’s inventory awaiting needed parts, at the end of the third quarter.”

While Ford does not provide the profitability breakup of the F-150, it is believed to be a $42 billion business and the single biggest contributor to the company’s profitability. It is widely believed that the profits from Ford’s F-150 sales subsidize some of the other loss-making models. Unsurprisingly, Ford has big expectations from the F-150 Lightning model.

Unlike some of the other electric vehicle companies that are making losses and burning cash for every car that they sell, Ford predicted the F-150 electric model to be profitable from the beginning. However, supply chain woes and high inflation have complicated the picture for Ford. 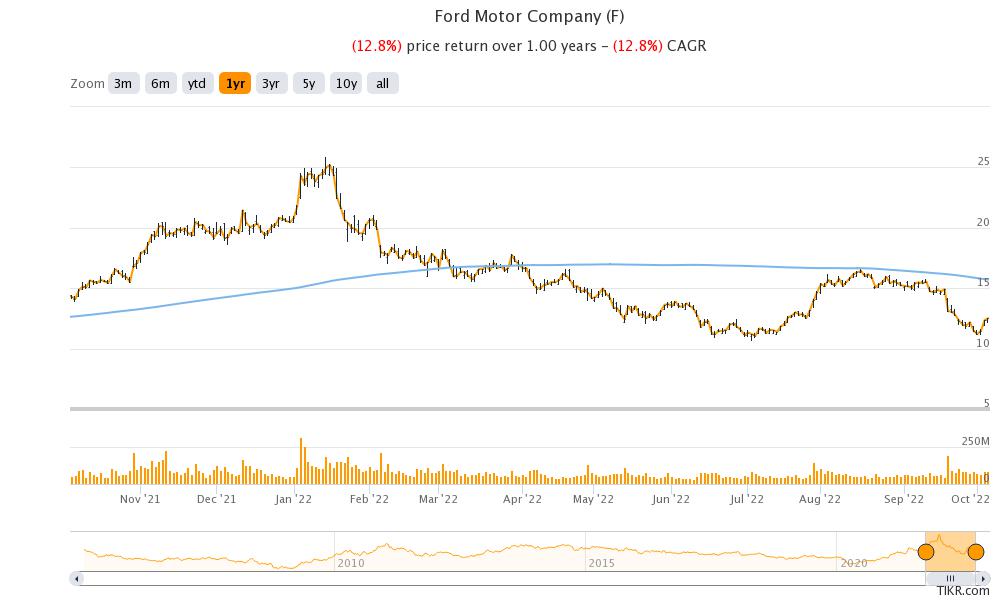 Almost all the legacy automakers are now betting on electric cars. Ford also announced an increase in its capital outlay toward electric and autonomous cars and it would spend $50 billion by 2026. It expects to reach a nameplate capacity of 600,000 EVs by the end of next year. By 2026, the company expects to sell 2 million EVs globally.

Ford has predicted that by 2030 half of its sales globally would come from EVs. Rival General Motors intends to stop selling ICE (internal combustion engine) cars by 2035.

From the next year, F would start reporting the results for the three businesses separately. This would help markets understand the profitability of the EV business. Barring Tesla, all other pure-play EV companies are posting massive losses. Tesla too was barely profitable in the initial years but has posted profits in every quarter since Q3 2019.

Morgan Stanley analyst Adam Jonas who had previously expressed doubts over Ford’s ability to ramp up its EV production and said that the company would be able to produce only about 560,000 EVs by 2026, now sees an attractive entry point in the stock. Jonas upgraded F stock from equal weight to overweight while maintaining the $14 target price.

“Potentially favorable idiosyncratic development regarding the company’s restructuring (creation of Ford Blue and Ford Model e) has the potential to better align the growth and capex needs of the EV business with a more favorable cost of capital,” said Jonas in his note.

He however lowered General Motors’ target price from $42 to $30 while maintaining his equal weight rating. Jonas likes F stock for its valuation and said that the company trades at 8 times its 2022 expected EPS of $1.5.

Pure-play EV names like Tesla and Rivian attract a much higher valuation. At its peak last year, Rivian’s market cap was more than $150 billion making the company more valuable than Ford and General Motors. Rivian expects to sell about 25,000 cars this year. It currently sells a sports SUV R1S and the pickup truck R1T. Rivian also has an order for 100,000 delivery vans from Amazon, its largest stockholder.

However, it is set to counter increased competition including from Tesla which would launch its own pickup model the Cybertruck in 2023. Cybertruck was expected to debut in 2022 only but Tesla later extended the timeline amid the global supply chain crisis.