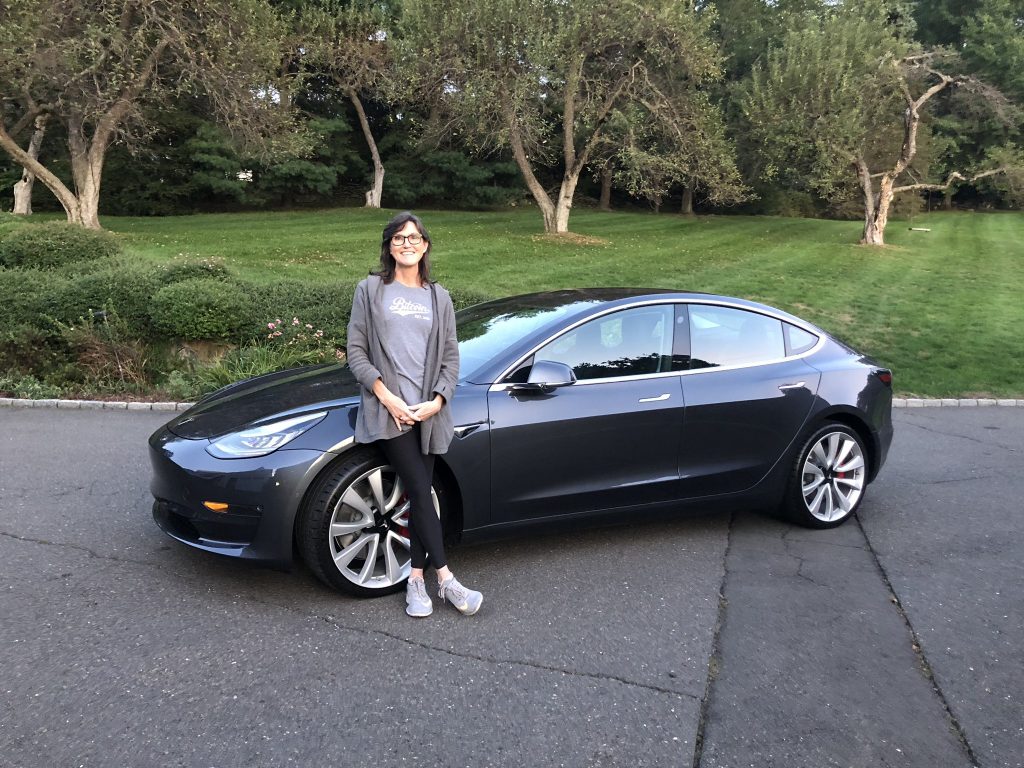 2021 hasn’t been a good year for growth investors. Cathie Wood, who runs ARK Invest is among the best-known growth fund managers on Wall Street. The massive underperformance of growth stocks has taken a toll on ARK funds also, including the flagship ARK Innovation ETF (ARKK), whose top holding is Tesla.

On Friday, ARKK fell 5.5% and took its losses for the week to 12.6%. It was the worst week for the fund since February. Back then, rising bond yields took a toll on growth names.

ARKK is in a bear market territory

ARKK is down almost a quarter this year and is underperforming the markets by a wide margin. The drawdown from the 52-week highs is even severe at 41%. Wood’s flagship fund is in a deep bear market this year after having outperformed the S&P 500 by a wide margin last year.

The analysis of the individual holdings is even scary and barring Tesla and Trimble, all the holdings are in a bear market, having fallen more than 20% from their recent highs. Tesla has been a sort of a savior for ARKK and despite the recent fall, the Elon Musk run company is still up 43.8% for the year. Meanwhile, Wood has been trimming her positions in Tesla in order to limit the allocation to the stock.

Wood has sold some Tesla shares

Here it is worth noting that while ARKK has sold some Tesla shares to limit the portfolio exposure to a single stock, Wood continues to remain bullish on the EV (electric stock) and under her base case scenario expects the stock to rise to $3,000 by 2025. This would mean the stock tripling from here and commanding a market cap of around $3 trillion. Gene Munster is also bullish on Tesla and expects its market cap to rise to $2 trillion by 2023.

Wood has been buying “falling knifes”

Meanwhile, Wood has been buying what looks like “falling knifes” in hindsight for the actively managed ETFs including ARKK. Her most recent purchases include Robinhood and DocuSign. Both the stocks fell to a new 52-week low on Friday. Notably, Wood went on a buying spree in Coinbase after it tumbled following its direct listing. The stock continued to tumble thereafter but has since slightly recovered. Wood has also been loading up on Zoom Video Communication shares. 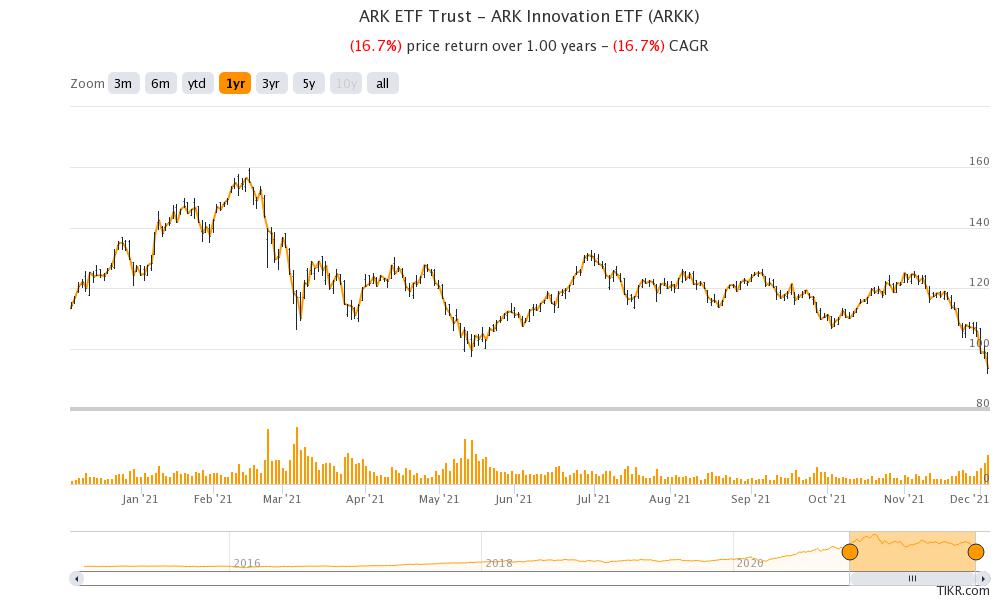 ARKK ETF is at a 13-month low as its holdings have tumbled. Meanwhile, Wood is known to back up companies that she likes and buys more when the stock tumbles. However, the problem this time has been that the “stay-at-home” winners like Zoom, Teladoc Health, and DocuSign, which she holds, are witnessing a severe growth slowdown.

Almost all the “stay-at-home” winners have tumbled after their recent earnings release, with DocuSign being the most recent addition. All these companies have talked about slowing growth. The pandemic boost is not coming back for these companies and their topline growth has settled at a much lower rate than last year. The valuations of the growth names that ARKK holds have also come down in line with the new realities.

Wood believes the market is in a bubble

Meanwhile, while many believe that her funds have scope to fall more, and Michael Burry recently bet against ARKK, Wood says that her names are not in a bubble. “We are not in a bubble. Our strategies would be flying if we were. I think we have not begun rewarding innovation for what’s about to happen and so that’s where our conviction comes from,” said Wood speaking with CNBC.

She added that the benchmark stocks are in a bubble instead. “The other side of [disruptive innovation] is creative destruction, and we do believe that traditional benchmarks are where that’s going to take place,” added Wood.

What’s the criticism of ARKK?

Meanwhile, several observers or Wood and her ETFs point that all her ETFs now look similar. So, we’ll find Tesla in multiple funds. Her space exploration ETF deserves a special mention here.

According to ARK Investment, the ETF that trades under the ticker ARKX “will invest under normal circumstances primarily (at least 80% of its assets) in domestic and foreign equity securities of companies that are engaged in the Fund’s investment theme of Space Exploration and innovation.” It describes space exploration as “leading, enabling, or benefitting from technologically enabled products and/or services that occur beyond the surface of the Earth.”

ARKX ETF had some strange holdings

Meanwhile, many were critical of ARK Invest for having companies like Deere, Amazon, and Netflix in an ETF focused on space exploration.

Jim Cramer, the host of the Mad Money show on CNBC, said “It’s ridiculous, but there aren’t enough genuine space-related stocks to make a decent ETF and the manager wants to collect that 0.75% expense ratio.’ He added, “Maybe … don’t launch a space ETF if you have to pad it out with Netflix and Deere.”

Cramer added: “One look at the newly launched ARK Space Exploration ETF tells you everything you need to know about how managers can’t resist creating new funds, even if there’s no reason for them to exist.”

Meanwhile, ARK Invest analyst Sam Korus tried to justify the inclusion of Netflix in a space ETF. According to him, more than 40 million people in the US that don’t have a broadband connection. “If a satellite solution can bring access to those customers and expand the addressable market and the topline for Netflix, then this is something that is very important,” said Korus.

While he admitted to the adverse comments on the holdings, Korus said, “the fact that people are dismissing this out of hand is very reassuring to us, and kind of demonstrates the type of research that we’re doing and how we can be unique.”

Meanwhile, while Wood’s style of investing has come under criticism, she deserves credit for identifying winners like Tesla and Square early. While some fund managers saw Tesla as too expensive, she continued to hold the stock. The EV maker’s market cap is now $1 trillion and it become the first automaker ever to reach that feat.

What should you expect from ARKK in 2022?

Disruptive growth stocks that ARKK and other Wood ETFs hold have been under pressure this year. These stocks have fallen due to multiple reasons. These include slowing growth, tightening by the Fed, and overvaluation. Notably, the valuations of some of the Wood stocks got a way too ahead of fundamentals.

As things stand now, the worst seems to be nearly over for ARKK and other Wood ETFs. Some of her stocks now look attractive, especially from a long-term perspective. If you can brace short-term volatility and want exposure to innovative companies and disruptors, you can allocate some funds to ARKK at these price levels.

How to buy ARKK ETF