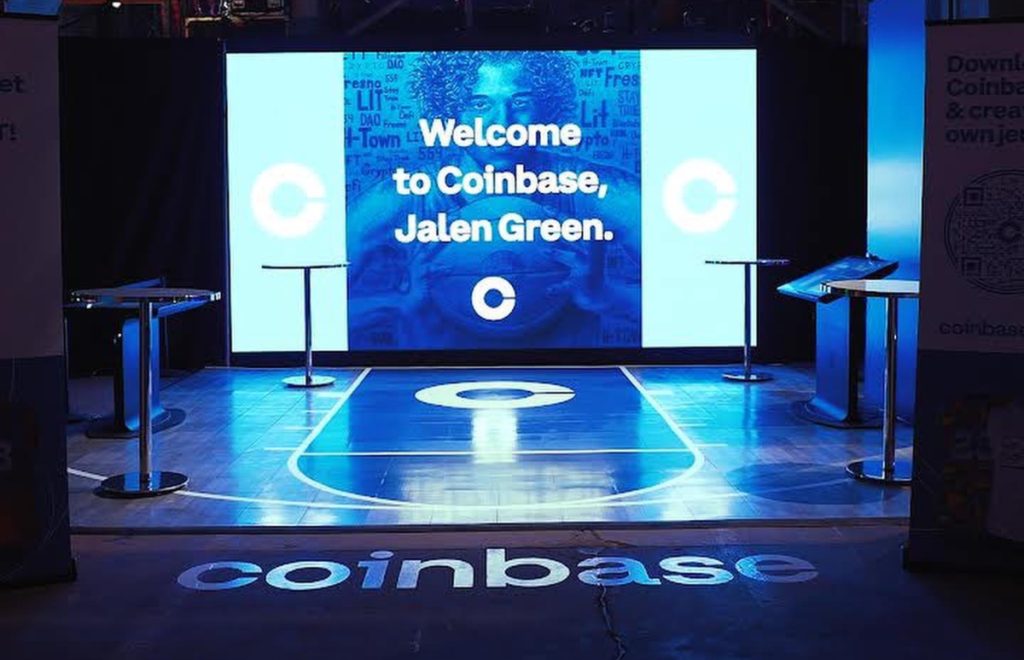 Coinbase reported its third-quarter earnings yesterday after the markets closed. The company’s revenues plunged by more than half in the quarter amid the prolonged crypto winter.

Coinbase reported revenues of $590 million in Q3 2022. The revenues fell by over 50% YoY and were also below the $654 million that analysts were expecting. Its transaction revenues fell 44% sequentially to $366 million, led by the fall in trading activity.

However, its subscription and services revenues increased 43% to $211 million over the period. The company attributed the increase in revenues to higher interest income. Notably, Robinhood which posted its third-quarter revenues a day before Coinbase also reported a steep rise in interest income. However, its crypto volumes plummeted in the quarter.

In its shareholder letter, Coinbase termed the third quarter as “mixed” and said that the results were “largely consistent” with the guidance that it provided in August while releasing its Q2 earnings.

It said “Transaction revenue was significantly impacted by stronger macroeconomic and crypto market headwinds, as well as the trading volume moving offshore. Meanwhile, we saw strong growth in our subscription and services revenue, driven by our participation in the USDC ecosystem and higher staking activity.”

Coinbase reported a per-share loss of $2.43 which was wider than the $2.40 loss per share that analysts were expecting. The company has now posted a net loss for three consecutive quarters as crypto winter has taken a toll on earnings.

While COIN missed both the topline and bottomline estimates in the third quarter, its user base surprised on the upside. It reported 8.5 million MTUs (monthly transacting users) in the quarter while analysts were expecting the metric at 7.84 million.

The company’s MTUs have nonetheless been falling. In the first quarter of 2022, Coinbase had 9.2 million MTUs which fell to 9 million in the second quarter. For the full year 2022, COIN expects its MTUs to be slightly below 9 million.

As losses mount, Coinbase is looking to control costs. It has laid off employees, adjusted its hiring plans, lowered marketing spending, and also cut vendor and infrastructure spending. It said, “We were pleased to see these actions bear fruit in Q3, as total operating expenses declined sequentially.”

The company said, “we remain cautiously optimistic that we will operate within the $500 million Adjusted EBITDA loss guardrail that we previously communicated.” However, it sounded circumspect on the 2023 outlook and said, “For 2023, we’re preparing with a conservative bias and assuming that the current macroeconomic headwinds will persist and possibly intensify.”

It ended the quarter with total cash and cash equivalents of $5 billion. The cash is crucial as the company copes with a prolonged crypto winter and competition from other low-cost crypto exchanges. 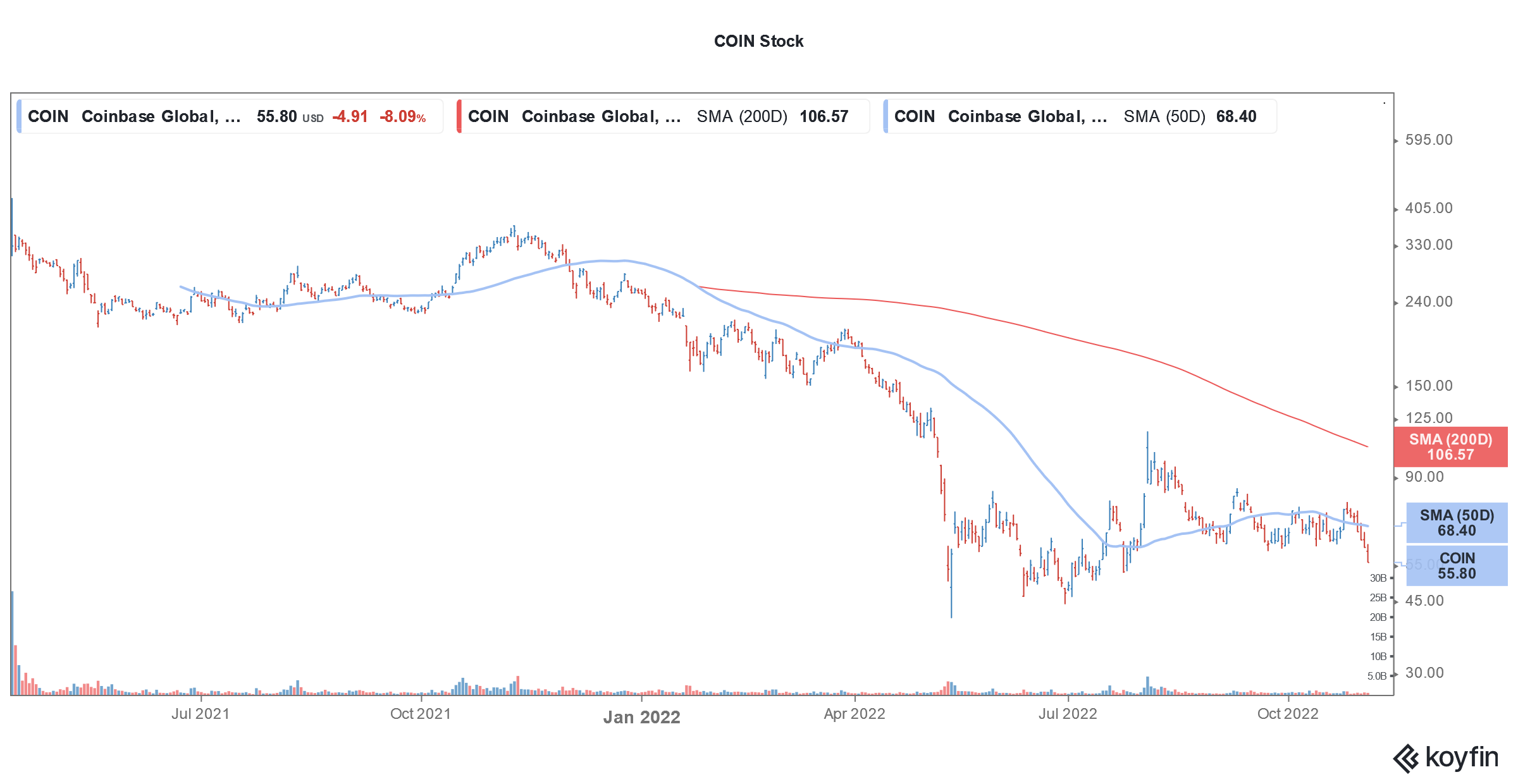 In its shareholder letter, Coinbase said that users continue to hold crypto assets but are trading less amid the fall in prices. Its aid said such “hodl’ing” behavior was evident in previous crypto winters also.

It said, “We view this as a sign that, on average, our customers maintain long-term conviction in crypto and we believe they will likely become more active when market conditions improve.”

It also said that crypto regulation in the US is at an “inflection point.” Notably, earlier this year President Joe Biden released the long-awaited White Paper on crypto. A lot of countries are looking to regulate cryptos to protect the interest of all stakeholders.

Commenting on the evolving crypto rules in the US, COIN said, “However, this legislation is not yet in place, and we are concerned that the regulation by enforcement practices of U.S. regulators create an incentive for crypto developers and issuers to leave the US crypto industry.”

Wall Street analysts are quite mixed on COIN stock. Last month, Mizuho reiterated it as neutral pointing to subdued trading activity. In September Wells Fargo initiated coverage on Coinbase with an underweight rating and a $57 target price.

Analyst Jeff Cantwell said, “Though we believe in the value of COIN’s platform, we see its early-mover advantages gradually being eroded away as the competition increasingly mimics the COIN ecosystem.”

He also pointed to the pricing pressure in the industry and said, “This is being driven by large competitors like Binance reducing or eliminating fees on certain cryptos to gain share: Binance now offers $0 fees for BTC and ETH.”

Cantwell added, “From a wider lens, historically we’ve watched brokerage firms follow a similar path of pricing compression over time—essentially, pricing is a ‘race to $0’ to grow/maintain market share.”

Meanwhile, Cathie Wood of ARK Invest is among the Coinbase bulls. Coinbase stock listed in 2021 through a direct listing. The company kept the reference price at $200 and eventually went on to hit a high of $368.90. The stock fell towards the end of 2021 as cryptocurrencies crashed. Notably, the total cryptocurrency market cap, which surpassed $3 trillion in November last year, has shed over $2 trillion in market cap amid the market sell-off.

The fall in cryptocurrencies has also taken a toll on Coinbase stock as well as companies like MicroStrategy which hold a lot of bitcoins on their balance sheet.