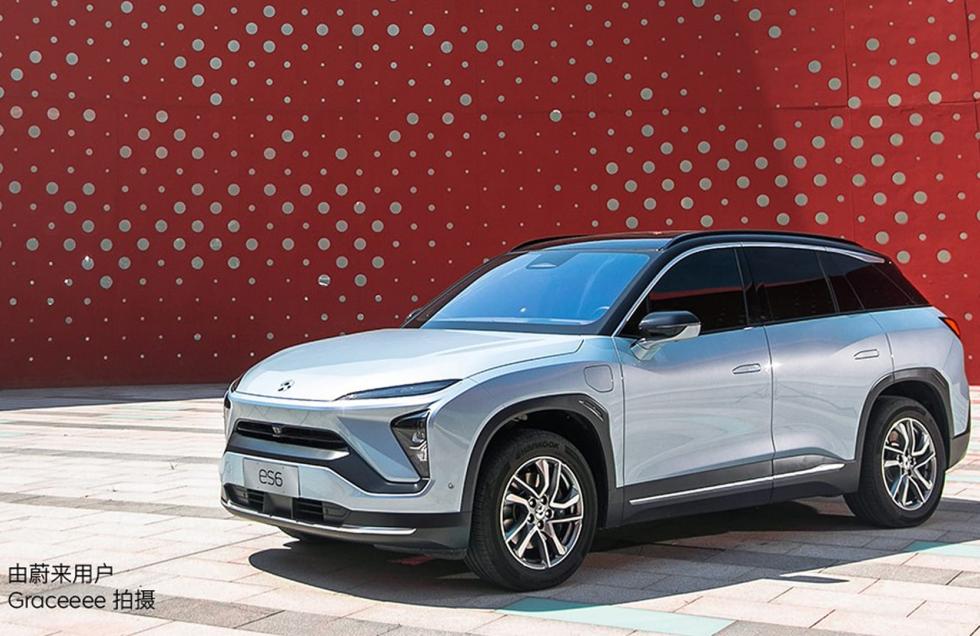 NIO stock tumbled over 7% on Friday but is trading around 1% higher in pre markets today. Citron Research, which was bullish on the Chinese electric vehicle maker, came up with a bearish report on the company that led to the sell-off. Can NIO prove Citron Research wrong with its Q3 earnings that are scheduled for Tuesday? Let’s discuss this.

Two years back, Citron Research came up with a buy recommendation on NIO. Now, the company is advising selling the stock and has put a $25 price target arguing that the company is “in unchartered territory that can never be justified by its current standing in the China EV market or its near-term prospects.”

Many have hailed NIO as a “Tesla killer” but Citron now believes it’s the other way around. According to Citron, NIO’s EC6 hatchback would face competition from Tesla’s Model Y in terms of pricing.

In its report, Citron cited Chinese analysts who see a price war in the Chinese electric vehicle market. “Recent estimates from securities firm Tianfeng Securities are pointing at something quite remarkable for Tesla’s ongoing ramp in China. As noted by the firm in a recently-released research report, Tesla’s strategy of passing its cost savings to customers could result in the Made-in-China Model Y starting at a very reasonable price of CN¥275,000 (about $41,000),” said Citron in its report. 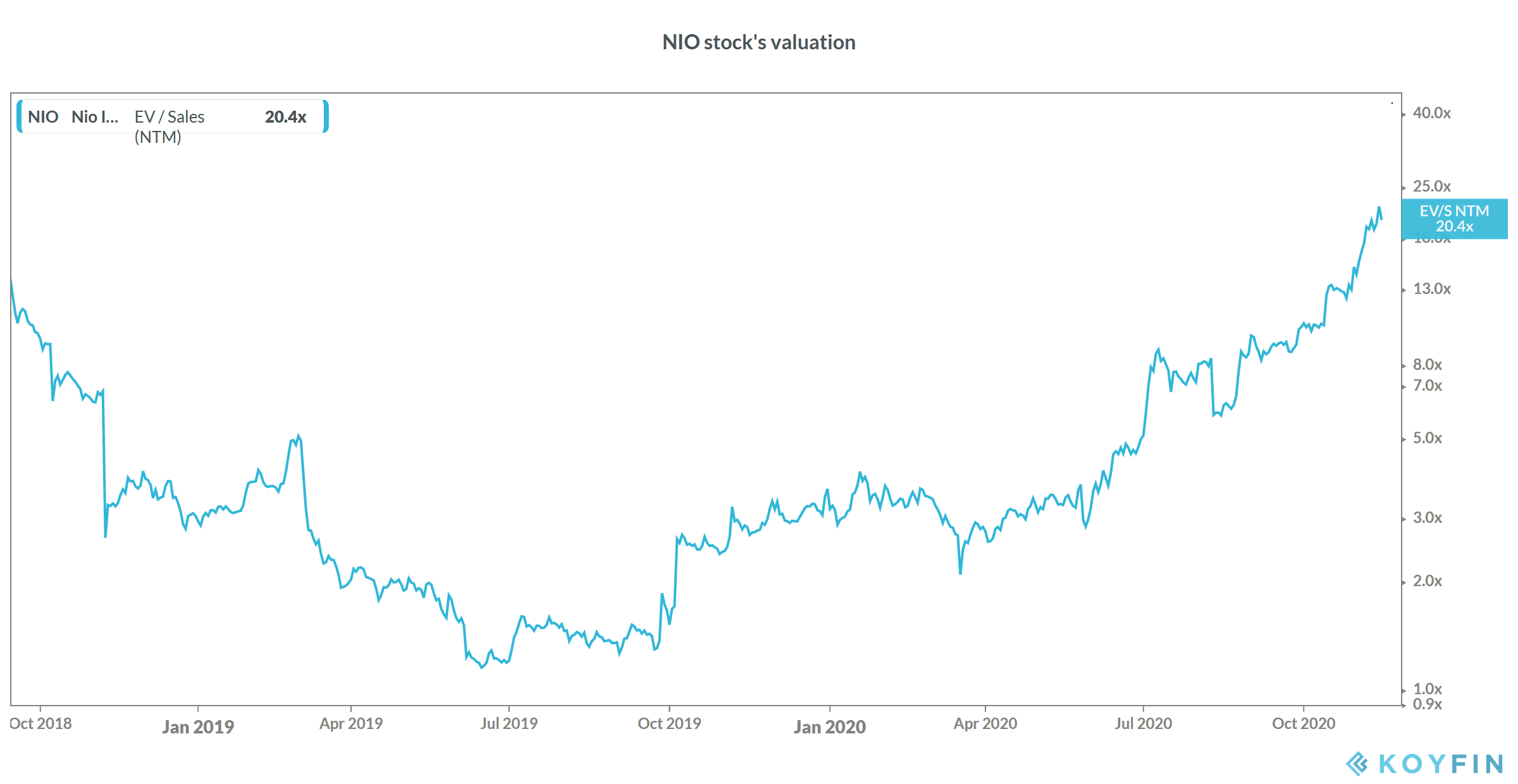 Here it is worth noting that both Tesla and NIO have different business models. Tesla controls a large part of its manufacturing ecosystem including making batteries in joint ventures. It also makes many of the car components. In contrast, NIO does not even have its own manufacturing facility and its cars are manufactured by JAC Motors.

Tesla is pretty much a global automaker now while NIO sells its cars predominantly in China. To be sure, NIO is looking at international expansion and hinted at entering the European market in 2021. However, unlike Tesla that has a global brand recall thanks to its charismatic chief executive Elon Musk, NIO does not have the same appeal globally.

Also, Tesla also has renewable energy operations. Currently, the Energy segment forms a small part of Tesla’s revenues but Musk expects the segment to become bigger than the core automotive segment over the long term.

NIO also offers BaaS (battery as a service) in China that can be a value driver in the long term as electric vehicle adoption grows. While the company’s cars don’t qualify for the Chinese government’s subsidy based on vehicle prices, its BaaS services make it eligible for the subsidy.

NIO also a tactical support of the Chinese government that sees electric vehicles as a strategic industry. It was evident when the Hefei Municipal Corporation invested in the company in what was then seen as a quasi-bailout for the Chinese electric vehicle maker. 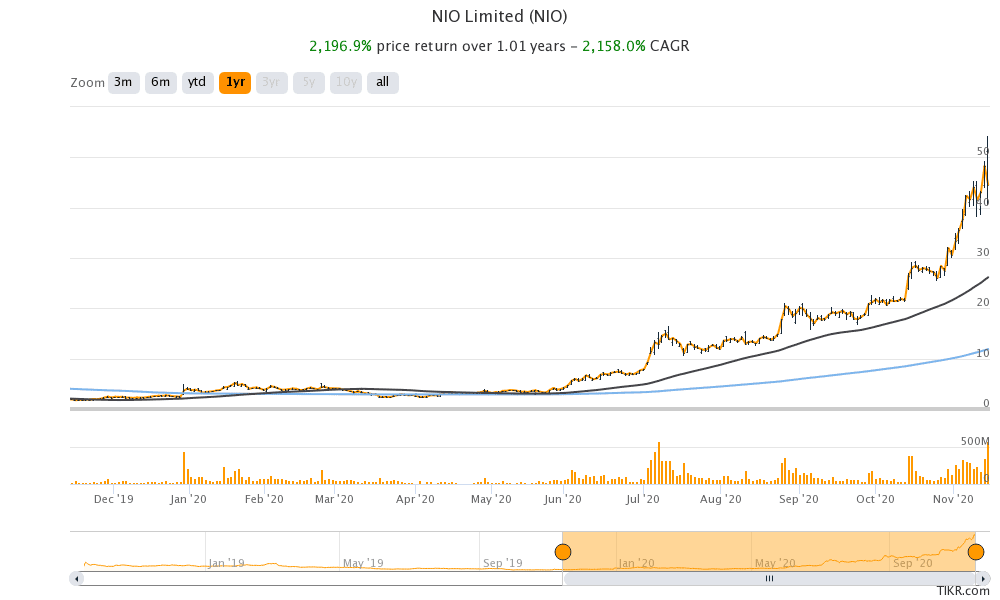 Chinese electric vehicle makers’ stocks have been on a fire

NIO stock is up over 1,000% year to date and almost 2,200% over the last one year. While NIO was trading with losses in the first quarter, it soared thereafter. While many feared whether NIO would survive beyond 2020, the company now has enough cash to fund its cash burn in the medium term.

It has also improved its finances and delivered a positive gross margin in the second quarter of 2020 fulfilling the promise it made earlier. NIO expects its vehicle gross margins to rise to double

Last week, two other Chinese electric vehicle makers XPeng Auto and Li Auto reported their earnings. Both the companies reported positive gross margin and Li Auto’s gross margins were over 19% which is very healthy. The earnings report triggered a buying spree in Chinese electric vehicle stocks and NIO surged to its all-time high of $54.20 on Friday before Citron Research spoilt the part with its report.

All said NIO needs to come up with strong earnings to justify the 1,000% rally in its stock price. However, looking at the valuation multiples, there is little denying that electric vehicle stocks look in a bubble.

Over the next two years, we’ll have plenty of fully electric vehicles from legacy automakers hitting the road. Also, companies like Lordstown and Workhorse would also have their models on the road. That would be the time when competition would really heat up in the electric vehicle space and we’ll get to see how much demand there actually is for electric vehicles.

You can buy NIO stock through any of the reputed online stockbrokers. Alternatively, if you wish to trade derivatives, we also have reviewed a list of derivative brokers you can consider.