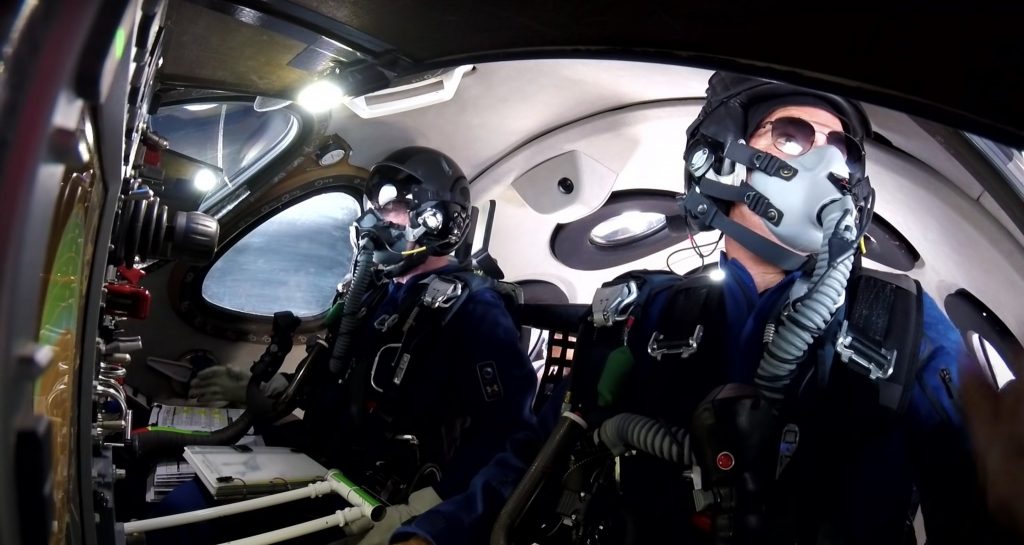 Virgin Galactic stock was trading sharply higher in early US trading today after the company announced an FAA (Federal Aviation Administration) approval for its space mission.

“The adjustment to Virgin Galactic’s operator’s license, which the Company has held since 2016, marks the first time the FAA has licensed a spaceline to fly customers. It is further validation of the Company’s methodical testing program, which has met the verification and validation criteria required by the FAA,” said Virgin Galactic in its release.

Virgin Galactic went public last year through a reverse merger with Chamath Palihapitiya’s SPAC (special purpose acquisition company). It was the first company to merge with a Palihapitiya SPAC. Since then, Opendoor, Clover Health, and SoFi have gone public through a reverse merger with SPACs sponsored by Palihapitiya. He has earned his title as the “king of SPACs.” That said, he was surrounded by controversy after Hindenburg Research accused him of not doing the due diligence in the Clover Health merger.

Palihapitiya was also criticized for selling Virgin Galactic stock. While he was within his rights to sell the stake, investors saw it as a sign that he is exiting the company too early.

Meanwhile, the FAA approval is a major milestone for Virgin Galactic. “We’re incredibly pleased with the results of our most recent test flight, which achieved our stated flight test objectives,” said Virgin Galactic CEO Michael Colglazier.

He added, “The flight performed flawlessly, and the results demonstrate the safety and elegance of our flight system. Today’s approval by the FAA of our full commercial launch license, in conjunction with the success of our May 22 test flight, give us confidence as we proceed toward our first fully crewed test flight this summer.”

The space war has been heating among billionaires. Along with Virgin Galactic, which was founded by Richard Branson, Tesla’s CEO Elon Musk and Amazon’s CEO Jeff Bezos also have space travel companies. Musk even started to accept Dogecoin as a payment method for his privately held SpaceX. However, he triggered a sell-off in the meme cryptocurrency by calling it a “hustle” While Musk did a Twitter poll on whether Tesla should accept dogecoin, to which the majority responded in the affirmative, so far, he hasn’t allowed dogecoins as a payment method.

Musk even stopped accepting bitcoins as a payment method as he blamed the increasing fossil fuel intensity of bitcoin mining. However, Musk seems to be again cozying up to bitcoins. Next month, Musk will discuss bitcoins with Jack Dorsey. Both Musk and Dorsey are proponents of cryptocurrencies. Tesla invested $1.5 billion in bitcoin earlier this year. Square has also invested some of the treasury cash into bitcoins. 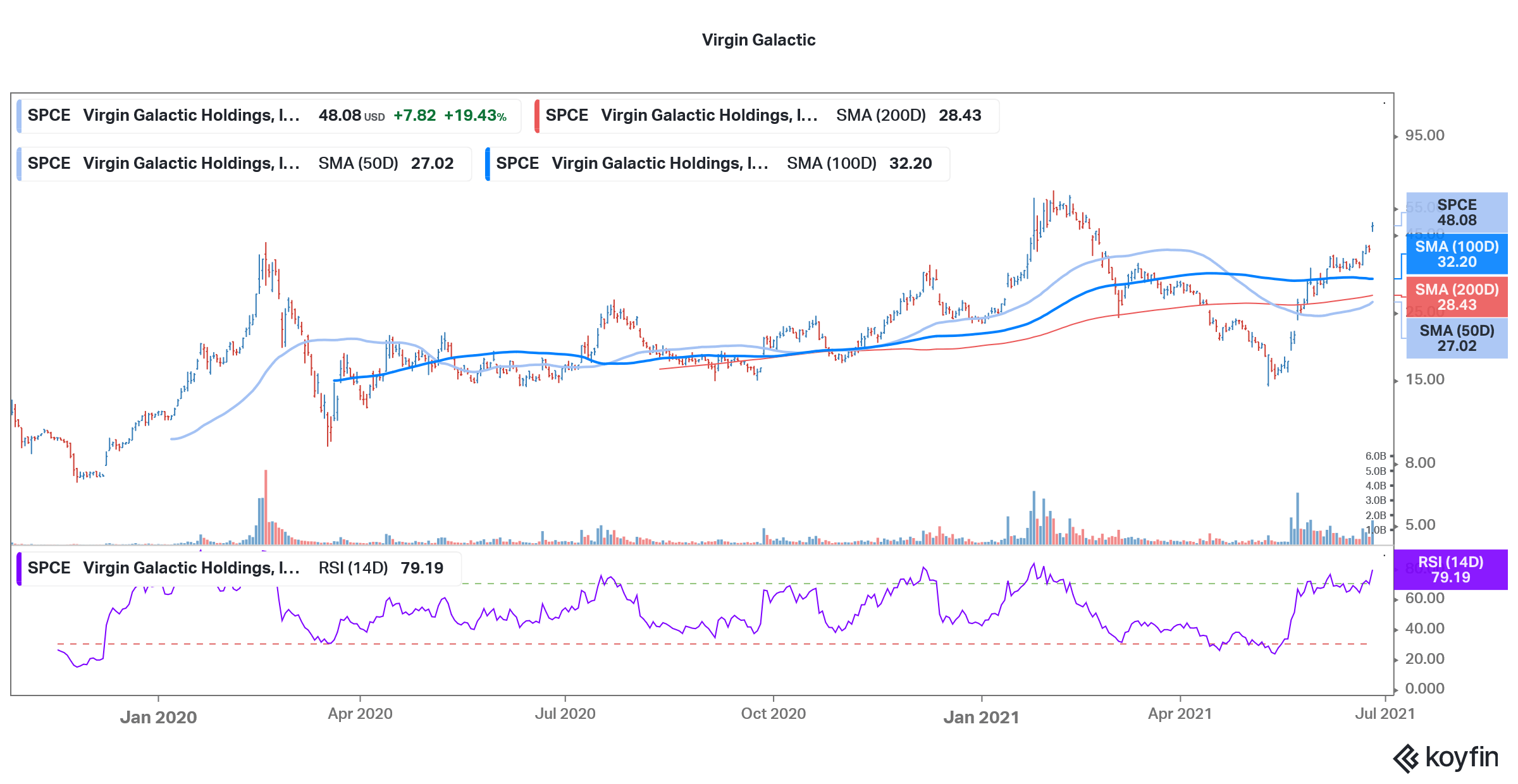 Coming back to Virgin Galactic, the FAA approval news should lead to positive sentiments for the stock which still trades below its 52-week highs. Last month, Bernstein raised the target price for Virgin galactic even as it maintained a market perform rating.

“We have reset our valuation model to our prior base case. The likelihood has increased that the next three flights (prior to commercial flight), will be completed close to plan. The next flight will be a full test of the experience, followed by the Richard Branson flight and a flight of Italian astronaut,” said Bernstein analysts in their note.

Alembic Global upgraded Virgin Galactic from neutral to overweight last month. “We are raising our rating on shares of SPCE from Neutral to Overweight following this past weekend’s (Saturday) successful spaceflight for the firm. While the firm still must analyze data from this weekend’s flight, we believe the flight is likely to keep the test schedule on track, providing catalyst for the shares, to include the remaining three test flights before the first regular consumer revenue-generating flight in early 2022,” said Alembic analysts in their note.

Looking at the consensus estimates, out of the 10 analysts covering Virgin Galactic stock, six have a buy rating while the remaining four rate them as a hold. The stock’s median target price implies a downside of almost 48%. The stock now trades near the street high target price of $50.

Virgin Galactic stock has spiked over 55% in June and has run ahead of analysts’ target price. While the FAA approval is a positive step for the company, the valuations have now started to look stretched.

The stock trades above the 50-day, 100-day, and 200-day SMA (simple moving average) which is a positive sign. However, the stock looks overbought with a 14-day RSI (relative strength) index of 79. RSI values above 70 signal overbought positions while values below 30 signal oversold positions.

How to buy space exploration stocks

You can invest in space exploration stocks like Virgin Galactic through any of the reputed online stockbrokers. Alternatively, if you wish to trade derivatives, we also have reviewed a list of derivative brokers you can consider.

Through an ETF, you can diversify your risks across many companies instead of just investing in a few companies. While this may mean that you might miss out on “home runs” you would also not end up owning the worst-performing stocks in your portfolio. Cathie Wood’s ARK Invest launched a space exploration ETF earlier this year. While the ETF was criticized for having stocks like Netflix, which are not exactly into space exploration, the ETF nonetheless could be a way to play the space exploration theme