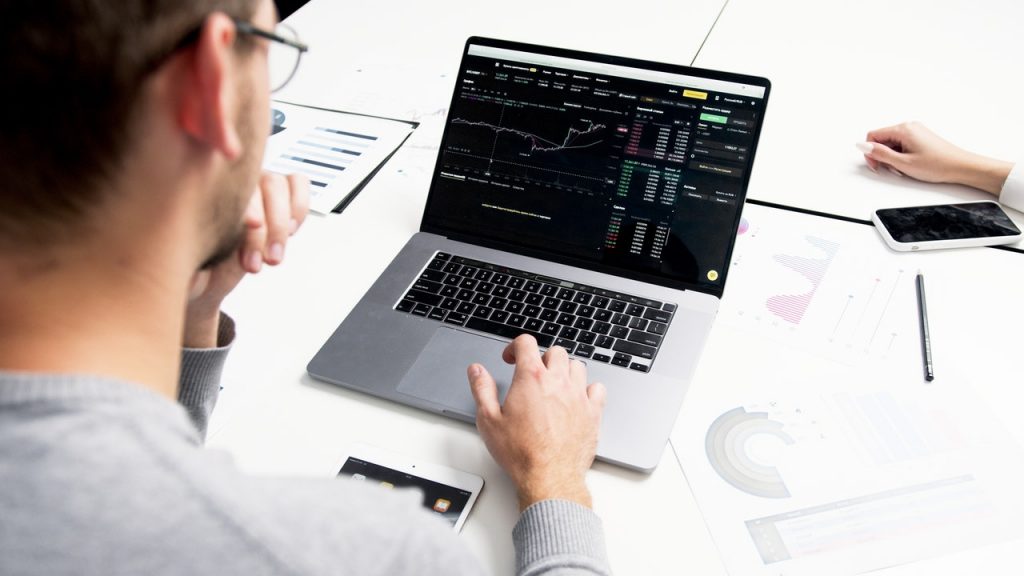 US stock markets have come off their record highs amid the uncertainty over the omicron variant of the COVID-19 virus. The weak November jobs report also added to the pessimism. What should investors expect from the US stock markets in December?

Notably, apart from concerns over slowing growth and high inflation, the gradual tightening by the US Federal Reserve is another risk for investors. The US central bank has already begun tapering down its monthly bond purchases and is expected to increase the pace of tapering before an eventual rate hike which could come as soon as the next year. While stock markets are pricing a gradual tapering, a 2022 rate hike still does not seem baked in prices.

Meanwhile, the weak November jobs report coupled with the emergence of the omicron variant, which by initial findings is quite contagious, might prompt the Fed to go a bit slow on its monetary policy tightening. Liz Young, head of the investment strategy at SoFi said “I think there was a little bit of a mixed message here and it gives the Fed a little bit more to think about, and we’re not necessarily positive that they’re going to hike rates so quickly.” However, Young pointed to the increase in labor force participation rate and the fall in the unemployment rate in the November jobs report. While markets focused on the headline jobs number, some of the other data points got masked out.

David Kelly, chief global strategist at JPMorgan Asset Management is among those who see a lot of positives in the jobs report. He said, “The broad picture is we’re running out of workers fast and wage growth is very strong, particularly for low-wage workers. So I see a lot of momentum here, more momentum on the demand side than the supply side. And I do tend to agree that this means the Fed probably tapers faster and hints earlier about raising rates than they were earlier doing.” Notably, JPMorgan is among the most bullish brokerages on US stock markets and expects the S&P 500 to hit 5,000 early next year.

Where are US stock markets headed?

JPMorgan is not the only brokerage that sees US stock markets running higher next year. Goldman Sachs also expects the S&P 500 to hit 5,100 next year. The brokerage believes that while the valuations would be capped amid the rise in real interest rates and there would be sector rotation among stocks, profit growth would drive markets higher, just as they did in 2021. Consensus estimates call for an 8.8% increase in S&P 500 profitability in 2022.

Notably, the consensus view is that as the supply chain and inflationary pressures would ease next year, US companies would report higher earnings. These issues have taken a toll on corporate profitability and many companies including giants like Amazon have taken a hit on their profitability. At the low end of its guidance, the e-commerce giant expects its operating profits to be zero in the fourth quarter. Amazon’s dismal fourth-quarter guidance took a toll on its stock and it tumbled after the third-quarter earnings release. It is the worst-performing FAANG stock this year amid fears of slowing growth. 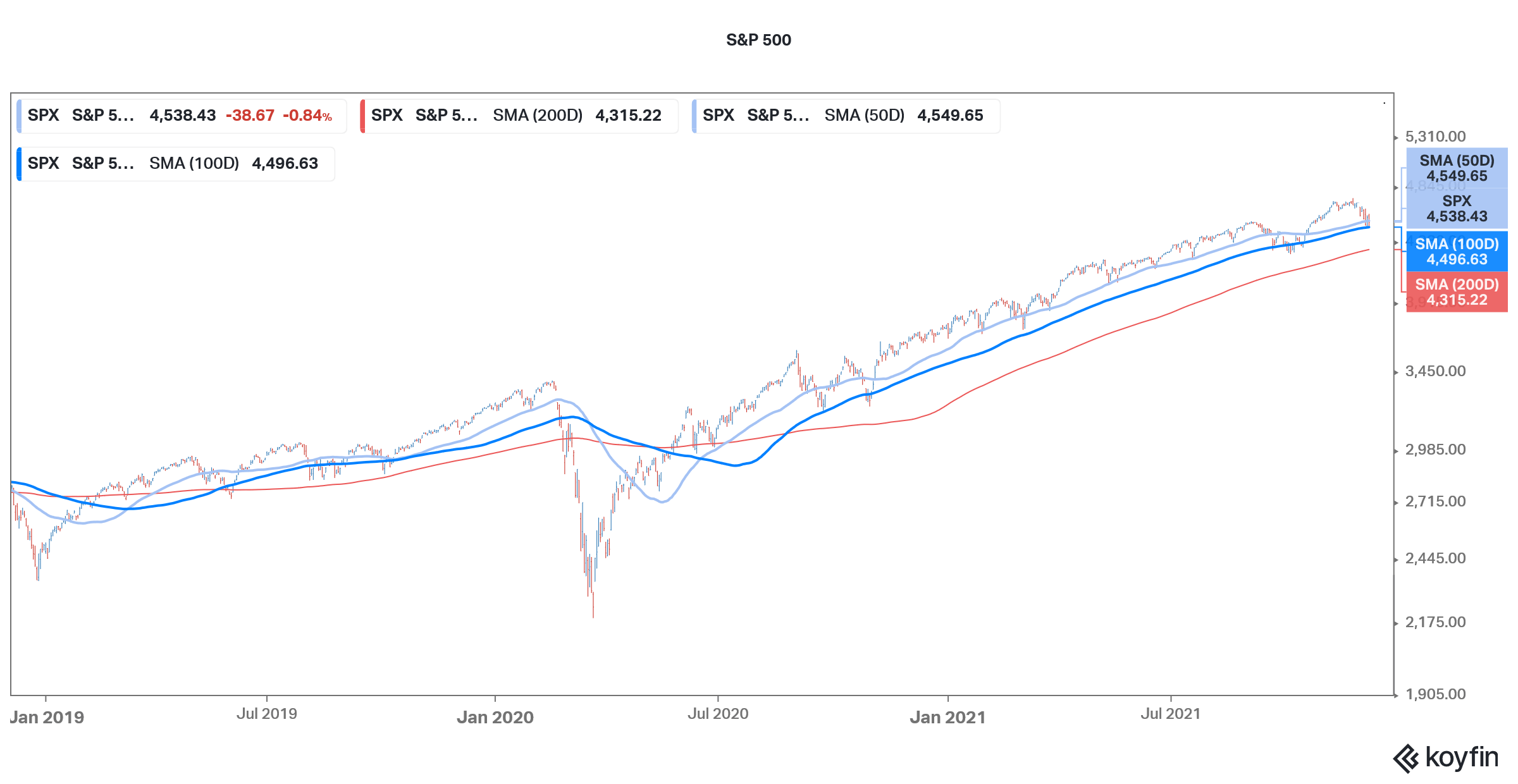 The technicals for US stock markets are looking bearish

Meanwhile, the technicals for US stock markets are currently looking bearish and the S&P 500 has fallen below its 50-day SMA (simple moving average) which has been a strong support channel for the world’s most popular index. The next support for the S&P 500 could be the 100-day SMA which is currently at 4,496. Meanwhile, some strategists believe that US stock markets could see a year-end rally.

Sam Stovall, chief investment strategist at CFRA is among those who are bullish on US stock markets in December. According to Stovall, “December is the second-best month of the year, second only to April. On average, the S&P 500 rises 1.6% and is up an average 76% of the time.” Pointing to historical data, he said that when stocks fall in November, as they did in 2021, on average the S&P 500 rises 2.8% in December and closes with gains 88% of the time.

US stock markets tend to rise towards the end of the year which is known as the “Santa Claus” rally. However, for this year, the opinion is divided on whether we would see a Santa Claus rally amid the uncertainty caused by the omicron variant. Pointing to technical data, Jim Cramer said that he expects US stock markets to fall a bit more before staging a rebound in the back half of the month.

Notably, the silver lining in the omicron variant has been that at least some believe that while it is more infectious, it is not as lethal as the delta variant. Angelique Coetzee, a doctor in South Africa said “What we are seeing clinically in South Africa, and remember I’m at the epicenter of this where I’m practicing, is extremely mild for us.” Coetzee added, “These are mild cases. We haven’t admitted anyone. I’ve spoken to other colleagues of mine and they give the same picture.”

William Hanage, an associate professor of epidemiology at Harvard believes that new cases of hospitalizations in South Africa, which identified the omicron variant for the first time, “are ticking up but not incredibly fast.”

The fall in oil prices is a positive

Meanwhile, crude oil prices have come down which is a positive for stock markets globally. If brent oil remains under $70 per barrel, it would help address inflation fears. Major oil importers including the US, China, and India have also released some oil from their strategic reserves to put pressure on oil-producing companies to increase their production.

How to invest in stock markets

Over the long-term stock markets are the best asset class. For more information on trading in stocks, please see our selection of some of the best online stockbrokers. If you wish to trade derivatives, we also have reviewed a list of derivative brokers you can consider.

Also, if you are not well equipped to research stocks or want to avoid the hassle of identifying and investing in stocks, you can pick ETFs that give you a diversified exposure to different themes.