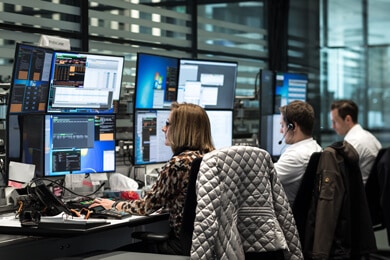 US stock futures are rallying this morning during the European stock trading session on the back of a recovery in the banking sector after the FinCEN scandal.

Major European stock indexes are sharply higher this morning as well led by the German DAX which is gaining 2.82%, followed by the French CAC 40 and the FTSE 100, both of which are up 2.1% and 1.48% respectively, primarily led by a rebound in the banking sector.

Today’s rally is giving investors some confidence that the latest losing streak is over, although major threats remain on the horizon for companies including a resurgence of the virus in Europe and in certain key states of the US where the virus had already been temporarily contained.

Moreover, post-Brexit talks are scheduled to be resumed this week, with the end of the year deadline to exit the European Union looming on the backdrop, which could force the United Kingdom to accelerate a trade deal to avoid another slump in their economic recovery resulting from a no-deal Brexit.

How is the forex market doing?

The US dollar – as tracked by the US dollar index – is retreating 0.38% this morning at 94.21 as investors are once again favoring riskier assets despite the significant economic and political uncertainty.

The pound sterling, the euro, and the Australian dollar are among the biggest winners this morning, advancing 0.20%, 0.21%, and 0.36% respectively in today’s early forex trading activity.

Gold is slightly profiting from the dollar’s retreat, although the precious metal is still trading far below its all-time high of $2,000, currently quoted at $1,865 per ounce.

Nasdaq futures seem to be climbing above their intraday high of 23 September although they are still trapped in a bearish flag formation, a pattern that indicates that a potential continuation of the recent downtrend is in play.

A break above the flag at 11,600 could result in a trend reversal, which could again push the index above the 12,000 psychological resistance.

Meanwhile, E-mini futures of the S&P 500 are currently breaking above a falling wedge that formed as a result of the recent sharp drop in the index while posting a higher high in the RSI.

This is another sign that the market is significantly bullish ahead of Wall Street’s opening bell, although this bull run still has to be backed by US investors once the market opens in North America.