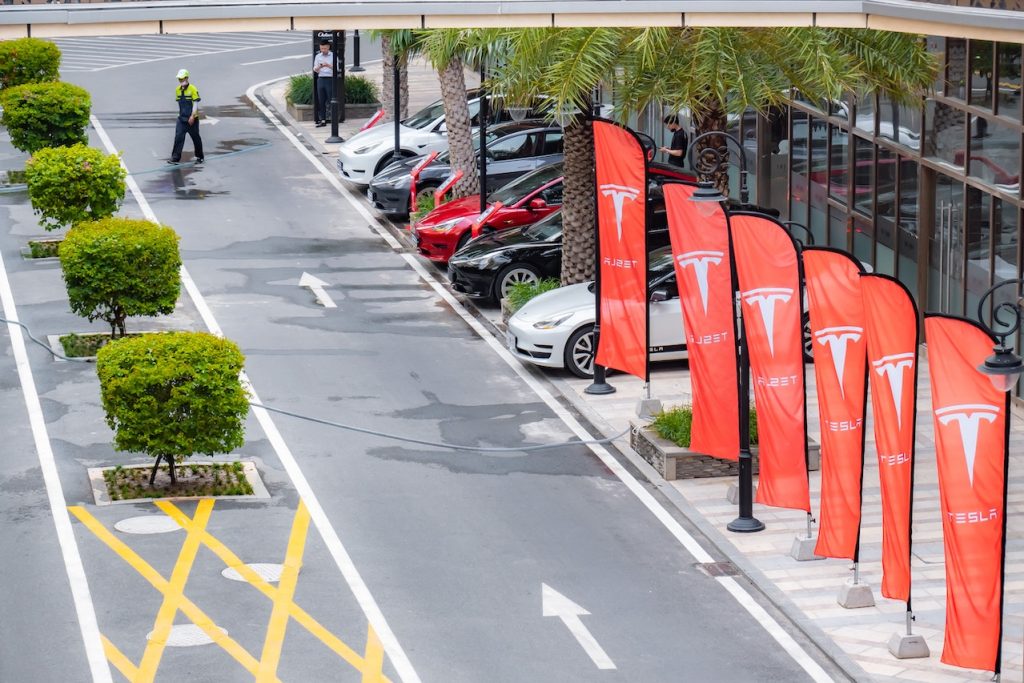 Tesla stock (NYSE: TSLA) is trading sharply lower in US premarket price action today after it released its third-quarter earnings. The company’s revenues fell short of analysts’ estimates and it trimmed its 2022 delivery forecast.

Tesla reported revenues of $21.45 billion in the third quarter of 2022, which was 56% higher than the corresponding period last year. While it was another quarterly record for the company, the metric fell short of the $21.96 billion that analysts were expecting.

The company delivered 343,830 cars in Q3 2022. While it was a new quarterly delivery record, it fell short of estimates. Tesla’s deliveries trailed analysts’ estimates in the second quarter as well. Prior to that, its deliveries surpassed estimates consistently for over two years.

Tesla reported a GAAP profit of $3.33 billion in the third quarter of 2022, a new quarterly record. Since Q3 2019, Tesla has posted profits in every quarter. Also, while most of its profits previously came from sales of regulatory credits, its share has gradually come down.

Tesla would look at buybacks

During Tesla’s earnings call, its flamboyant CEO Elon Musk talked about the possibility of a stock buyback. The company does not pay dividends and has never done a stock buyback in its history. It was on a stock-selling spree in 2020 and raised $13 billion in three rounds of stock issuances. It ended September with total cash and cash equivalents of $21.1 billion.

Musk said, “We debated the buyback idea extensively at board level. The board generally thinks that it makes sense to do a buyback, we want to work through the right process to do a buyback, but it is something possible for us to do a buyback on the order of $5 [billion] to $10 billion even in a downside scenario next year, given next year is very difficult.”

Usually, companies announce a stock buyback after it is approved by the board. However, Musk announced the possibility of a buyback in 2023 which he said is contingent on the board’s approval. He however said, “it’s likely that we will do some meaningful buyback.”

The stock buyback comments failed to lift Tesla’s stock. Along with the topline miss, Tesla also lowered its 2022 delivery guidance which spooked investors. 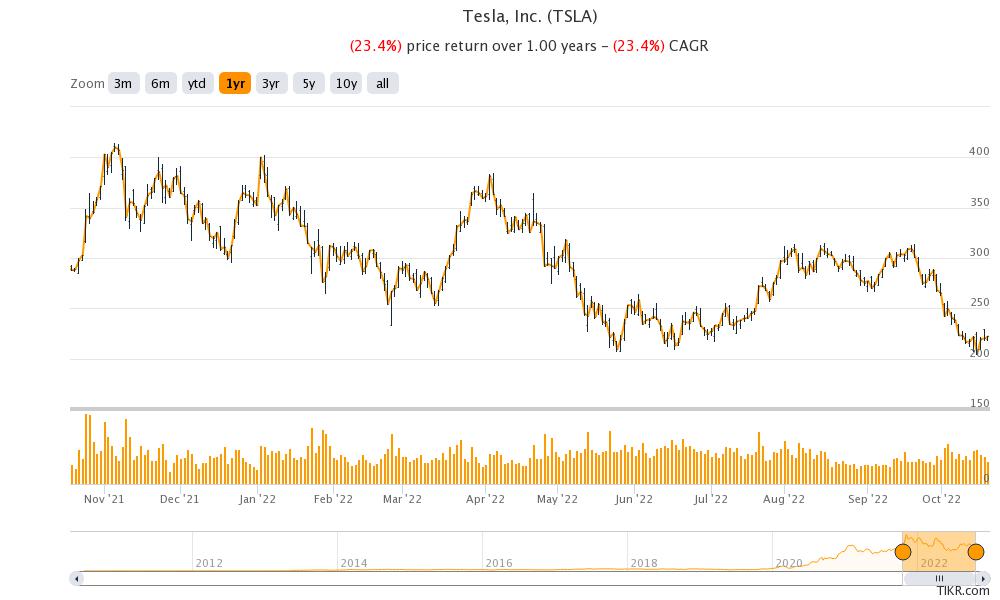 Tesla delivered around 936,000 cars in the first nine months of the year. Musk had previously said that the company would deliver over 1.5 million cars this year. Despite the slump in Q2 deliveries, Tesla maintained that its deliveries would rise at a CAGR of 50% over the long term.

To meet the 50% growth, Tesla would need to deliver around 495,000 cars in the fourth quarter. Wall Street analysts were doubtful that the company would be able to deliver as many cars in the quarter.

During the earnings call, Musk said that the fourth quarter would be an “epic” one for the company. However, the company’s CFO Zachary Kirkhorn said, “We do expect to be just under 50% growth [for deliveries] due to an increase in the cars in transit at the end of the year.”

During the earnings call, Musk said that Tesla’s market cap can far exceed these levels. He said, “I see a potential path for Tesla to be worth more than Apple and Saudi Aramco combined. That doesn’t mean it will happen or that it will be easy, in fact it will be very difficult, require a lot of work, very creative new products, expansion and always good luck. But for the first time I’m seeing, I see a way for Tesla to be, let’s say roughly twice the value of Saudi Aramco.”

Notably, last year, Tesla became the first automaker in history to command a market cap of $1 trillion. Musk’s views on the company’s valuations have however changed with time. From calling the stock “overvalued” in 2020, he ended up justifying the valuation the next year, despite it having risen multi-fold since 2020.

During the earnings call, Musk admitted that he is overpaying for Twitter. Indeed, Musk offered a hefty premium to buy Twitter. Twitter’s board was initially reluctant to let Musk acquire the company and also introduced a poison pill to thwart the acquisition attempt. However, given the massive premium that Musk was offering for Twitter, it looked legally untenable for the board to block the acquisition.

Musk later walked out of the deal expressing concern over the alleged bot accounts on Twitter which he claims is far above the 5% that Twitter claims. Twitter subsequently sued Musk for “specific performance. Earlier this month, Musk agreed to buy Twitter at the original terms.

Musk has sold billions of dollars of Tesla shares over the last year. He might need to sell some more shares in order to pay for the Twitter acquisition. Many are debating whether Musk is trying to pump Tesla stock with the stock buyback discussion and commentary on valuation.

This would provide a level playing field for Tesla and it could potentially look at raising car prices. Meanwhile, after Tesla’s third-quarter earnings release, some analysts have started to get apprehensive over the long-term demand outlook.

Tesla intends to sell 20 million cars annually by the end of this decade. This is roughly twice what the current market leader Toyota sells every year. Tesla has so far maintained that it is a supply-constrained company. However, after the Q3 earnings, there are now murmurs of it getting demand-constrained at some point especially as other automakers ramp up their EV production.