On Wednesday, JP Morgan raised NIO’s target price to a street high of $40 while upgrading it to overweight from neutral. The brokerage previously had a $14 price target on the electric vehicle maker. “In China’s smart EV market, we expect Nio to be a long term winner in the premium space among Chinese brands vs. (Xpeng Inc.) leading the mass market, while (BYD Co.) should likely see strong EV demand with rising external battery sales from 2022,” JP Morgan analysts said in the note.

Brokerages have been turning bullish on NIO stock

JP Morgan is not the only brokerage that is taking a bullish view of NIO stock. On Wednesday only Citi upgraded NIO stock from a neutral to buy while lifting its target price to $33.20 from $18.10. Citi analyst Jeff Chung cited the company’s increasing backlog and increasing sales volume while upgrading the stock

After the slump in the first quarter due to the supply disruptions caused by the COVID-19 pandemic, NIO’s sales have been rising steadily. NIO’s September sales increased 133% year over year to 4,708. The company’s sales have risen on a yearly basis for seven consecutive months.

NIO has delivered 26,375 electric cars in the first nine months of the year—up 114% as compared to the corresponding period in 2019. The sales growth expanded in the third quarter where the company’s deliveries increased by an impressive 154%. 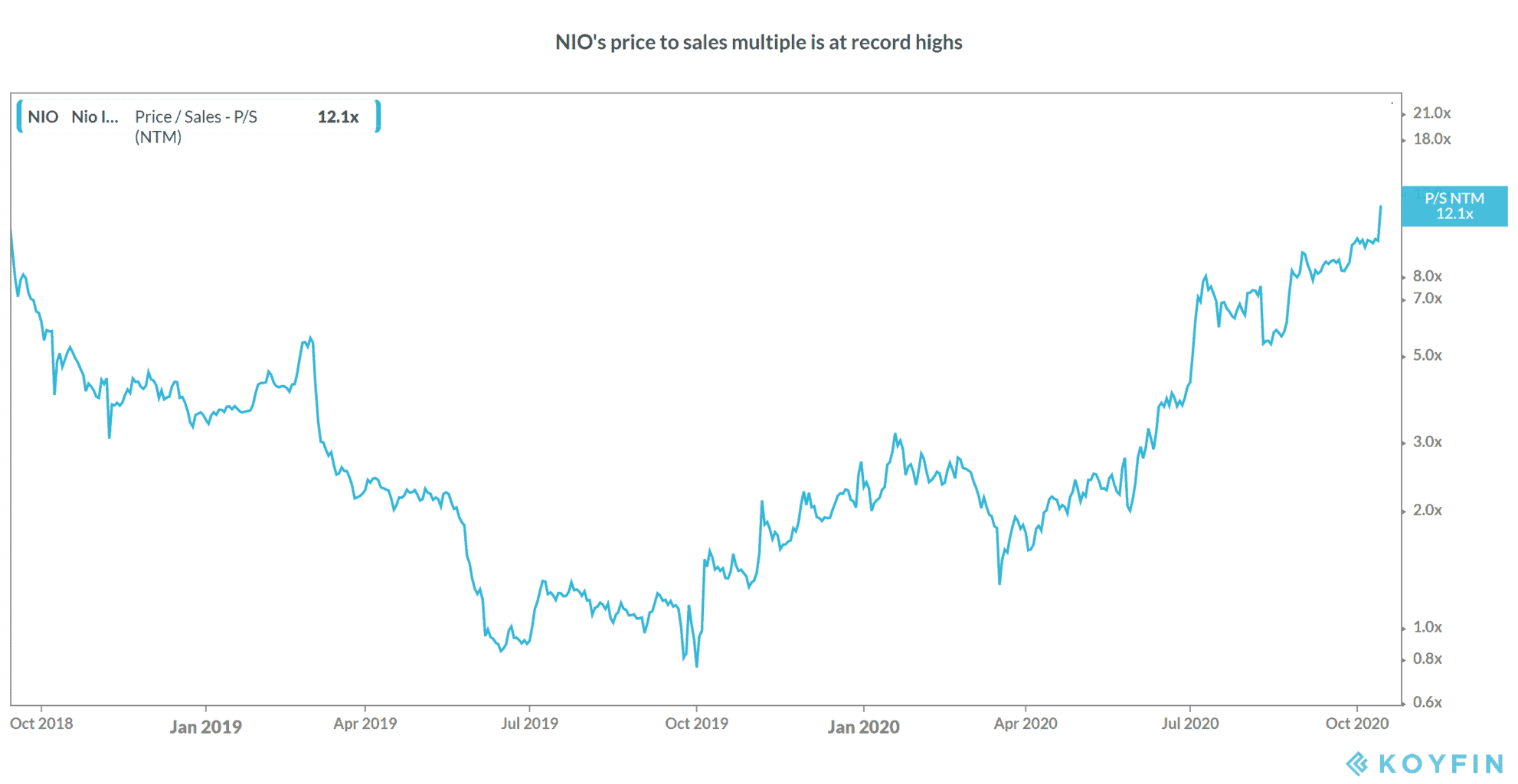 Earlier this year, there were concerns over NIO’s survival. The company was burning huge cash and had a massive debt to service. However, it took a series of steps to address the concerns. It strengthened its balance sheet by issuing shares twice. Tesla, whose CEO Elon Musk had categorically denied a capital raise in January, has also raised capital twice this year.

Along with the capital raise, NIO also won a strategic investment from the Hefei Municipal Corporation in China. The investment helped reassure markets that the Chinese government was willing to bail out the company that’s also hailed as China’s Tesla. Electric vehicles are a key focus area for the Chinese government and form part of the country’s “Make in China 2025 program.”

In an apparent bid to attract Tesla, China allowed the company to go solo in the country without any domestic partner. Other automotive companies have to form partnerships with domestic Chinese companies if they intend to do manufacture cars in the world’s second largest economy.

China is the world’s largest market for ICE (internal combustion engine) cars as well as electric cars. Tesla is also focusing on the Chinese market.

NIO stock has soared almost 560% so far in 2020. After the recent rise, NIO’s year to date returns now exceed that of Tesla’s that is up 451% for the year. Along with reporting increasing vehicle deliveries, NIO has also improved its operating performance. It took several measures including headcount reduction to lower its costs.

NIO reported positive gross margins in the second quarter of 2020 for the first time ever. The company expects its gross margins to rise to double digits by the end of the year. It is also looking at international expansion.

To be sure, there are valid concerns over the soaring valuations of electric vehicle makers. Tesla for instance trades at an NTM (next 12-month) price to sales multiple of 11.5x. Its market capitalization recently exceeded the combined market capitalization of Toyota Motors, Volkswagen, Ford, General Motors, and Fiat Chrysler. Tesla’s record on profitability has also been dismal and it has posted a net profit in only a handful of quarters in its history.

Looking at NIO, it now trades at an NTM price to sales multiple of 12.5x that is even higher than Tesla. NIO’s valuation multiples are the highest ever for the company.

While the sales of electric vehicles are expected to soar over the next decade, investors should be watchful of the soaring valuations in the space. While markets are valuing electric vehicle stocks like tech companies, they might not be able to post the kind of margins that tech companies like Apple enjoy.

NIO stock was trading almost 1% higher in pre markets today even as Nasdaq futures point to a gap down opening.

You can buy NIO through any of the best online stockbrokers. Alternatively, if you wish to trade derivatives, we also have reviewed a list of derivative brokers you can consider.