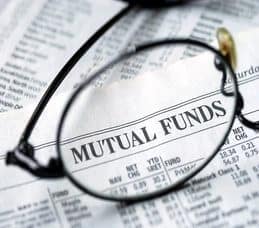 With that being said there are some important things that you can learn by looking at a bond fund’s historical performance, such as:

Where can you find a bond fund’s historical performance information?

Here is an example of the performance page for the PIMCO Total Return Bond Fund, which is the largest mutual fund in the world. Lets go through each of the historical performance sections and discuss insights they can provide.

The Star Rating: The first thing you see is the name of the fund, its ticker symbol, and its star rating.  The star rating system is Morningstar’s way of giving you a quick snapshot of the quality of the fund.  The stars go from 1 to 5, with 1 star being the worst and 5 stars being the best.  The system is based on the historical performance of the fund over the past 3, 5, and 10 years, minus any fees, compared to other funds in the same category.  You can read a more detailed explanation here.

The Yield: There are several different ways of looking at a bond fund’s yield.  Morningstar uses the 12 Month Yield, which sums all the interest payments made by the fund over the last 12 months, and divides that number by the fund’s NAV (the share price of the fund) at the close of the past month + any capital gains distributions that were made during that same time period.  In this example the 12 month yield is 3.56%, which means if you had held the fund for the last 12 months, you would have earned around $30.56 in interest income per $1000 invested.  Keep in mind that if interest rates change significantly in the future, then the yield going forward is likely to be significantly different as well.

The NAV: The next thing you see is the Net Asset Value (NAV) of the fund which is the cost of one share as of the close of trading the day before.  Beside that you see the change in value of the fund over the last 24 hours. The NAV number in isolation is not useful from a performance standpoint. However, when looked at in the context of the 52 week price range, which is also shown, it gives you an idea of how volatile the fund has been over the last year. If your primary objective when investing in a bond fund is income, then you want to see a fairly narrow range, indicating the price performance of the fund is not very volatile.  In this case the value of the fund has fluctuated between $10.69 and $11.31 over the last year which is around 6%. 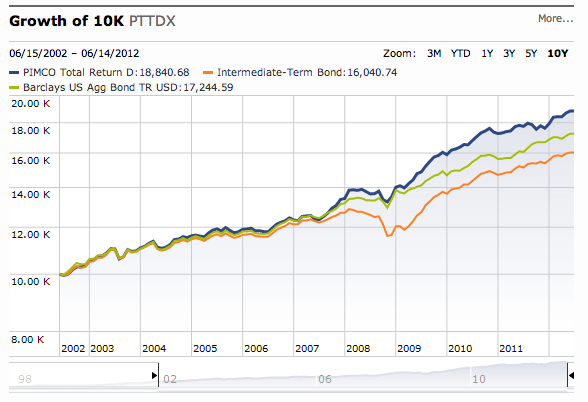 Growth of 10K: The next important part of the page for evaluating historical performance is the chart which shows the growth of $10,000 invested in the fund over the last 10 years.  This chart includes, changes in NAV, distributions, and the reinvestment of those distributions.

Two additional returns are plotted over the same time period, which are the performance of the same $10,000 had you  received the return of the fund’s benchmark index and the return of the average mutual fund in the category.  This is designed to give you an idea of how the manager has performed, not only in terms of the total return of the fund, but against their peers and the market average.  In this case Bill Gross, who manages the PIMCO Total Return Fund, has beaten both the market index and the average fund in his category.  For more on this see our articles on benchmarks and bond fund categories.

Percentage Performance: Next is the performance listing, which shows the return of the fund in percentage terms.  As with the performance graph, it also shows whether the fund over or under performed their Index and category, and by how much.  Keep in mind that the 1, 3, 5, and 10 year returns are averages, which smooths over volatility that may have occurred in shorter periods of time.  You may want the chart for spikes in performance (as you don’t want to invest in return and then have big drop).

Dividend and Capital Gains Distributions: For those focused on income, this is where you will find the income paid out by the fund.  This section gives you the amount of interest in dollars per share (ie .03727 would be 3.27 pennies per share) paid out per distribution during the current year, and the frequency of such distributions. Additionally, the table display capital gains (if any) which have been paid out by the fund in the current calendar year.