Traders who have so far missed the strong rally seen by gold this year can still jump aboard, according to analysts.

Craig Johnson from Piper Sandler and Nancy Tengler, chief investment officer at Laffer Tengler Investments, agree that gold’s surge is here to stay as investors feel attracted to the precious metal not just as an inflation hedge but also as a way to lower their exposure to equities amid an uncertain economic recovery.

The yellow metal has risen 30% this year and on Monday it hit a record high of $1,984.66, as investors search for safe stores of value at a time when economies around the world have hit the brakes due to coronavirus.

Johnson highlighted that the classic gold miner’s play – the VanEck Vectors Gold Miners ETF (GDX) – has been taking a breather lately as it steps out of the overbought zone, he told CNBC’s Trading Nation, However, he classified this move as a potential “buy the dip” situation.

“It’s gotten a little bit overbought. We’re waiting for it to come back a little bit and then we’ll probably add to some of our positions in the gold names just to create some further diversification into the portfolio”, said Johnson, a senior technical research analyst for Piper Sandler.

It is also worth noting that GDX is currently trading at only $42.5 per share while during 2011 – the time when gold last set its record level of $1,900 – it was trading at nearly $60 per share, which also points to a potential undervaluation, at least from a historical perspective.

The analyst also highlighted Wheaton Precious Metal (WPM) as a potential individual play, as the stock has emerged from its March lows with a very nice uptrend and shows no current signs of breaking its support line. 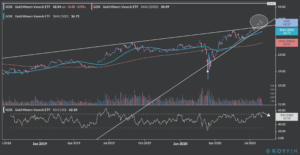 How to read these higher gold prices?

Nancy Tengler chief investment officer of Laffer Tengler added that holding gold directly – through gold futures or buying bullion – may not be the best way to hedge against inflation.

“Historically, gold has not been a great hedge against inflation compared to equities,” Tengler said.

For Tengler, copper, which climbed nearly 6% in July, “is a leading indicator on the economy and the metals.”

“We don’t think gold is signaling inflation,” Tengler said. “We think this is a safety play, but we also think that the metals are signaling economic recovery”.

“China’s about 50% of copper consumption,” she said. “We think this is bullish for the economy and we also think it’s bullish for stocks. That said, I think we need a breather. We are still expecting to see some sort of correction and I think we’ll get one as the political calendar takes over. And then I think we go higher.”