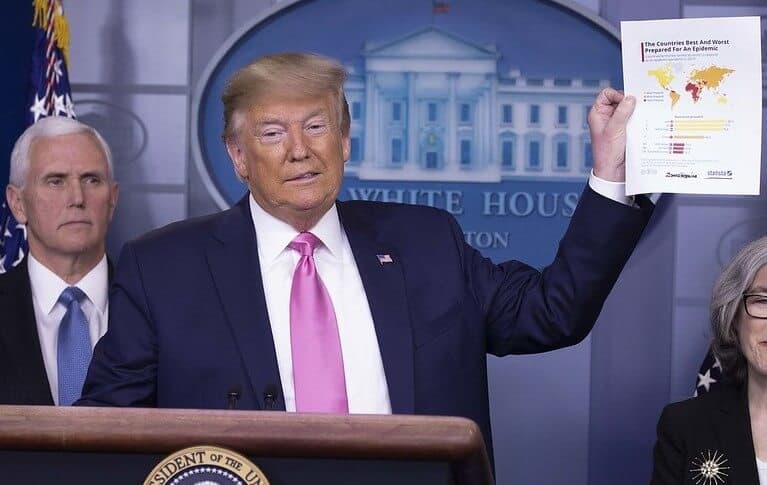 Just a month ago, former Center for Disease Control and Prevention Dr Tom Frieden, called America’s response to the coronavirus outbreak as “haphazard, uncoordinated, and sorely missing the guidance” — business experts are now worried this lack of coordination will delay the country’s economic recovery.

The US nears 1 million confirmed virus cases, which represents 0.3% of the population, and nearly 55,000 deaths so far, after conducting 5.5 million tests nationwide, according to the Johns Hopkins Coronavirus Research Center.

The states of New York and New Jersey are by far the most affected by the outbreak, as they account for nearly 40% of the total cases in the country, which has prompted democrat New York state governor, Andrew Cuomo (pictured), to go his own way, often against the wishes of President Donald Trump’s (pictured) White House administration.

These disagreements, along with the government’s willingness to scale back lockdown measures, have spread concerns and uncertainty among the investment community. Last week,  a paper released by the MIT Sloan School of Management said that strong social distancing measures may faster economic recoveries over not imposing such restrictions.

Emil Verner, the co-author of the paper, said: “Lifting restrictions too early could make the economy worse by leading to a resurgence of the virus in an even more destructive pandemic”.

US states have a certain degree of independence to choose which measures and to what extent they are willing to implement them on an individual basis. In Michigan, for example, no travel restrictions are in place and stay-home protocols are more relaxed, while in New York a full lockdown has been declared to contain the spread.

In this regard, uncoordinated state-level responses could be a cause for concern for municipal bond investors, even though the Fed and the federal government have stepped up to assist towns and cities through the Coronavirus Aid, Relief, and Economic Security Act (CARES), which make available more than $600bn in different kinds of federal aid for local governments.

You can buy stocks or trade US bonds by using one of our featured free stock trading apps, or you can also get exposure to the US market by buying an ETF or by trading CFDs that track US companies.