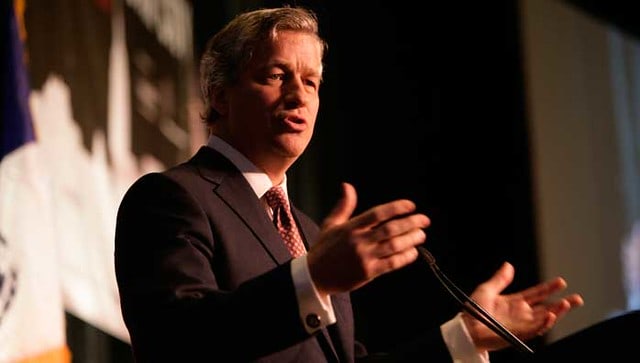 The head of America’s largest bank by assets, Jamie Dimon, is predicting an upcoming boom for the country’s economy as the combination of vaccinations, trillions in government spending, pent-up demand, and large savings balances should produce a strong bounce in consumption that could easily spill over to 2023.

The Chief Executive of JP Morgan & Chase, who is a highly influential voice on Wall Street, shared this optimistic outlook for the US economy in his annual shareholder’s letter, in which he addressed multiple topics including the role of banks in an increasingly digital economy and how remote working arrangements can reduce overhead for financial institutions over the coming years.

Notably, Dimon addressed a particular topic that seems to be worrying bank executives, with JP Morgan’s boss highlighting that competition from fintech companies and other entities that face less regulatory oversight compared to financial institutions has been somehow unfair while adding that their growth has been “partially” enabled by not being subject to the rules that regulate banks.

This last letter from Dimon has been the longest he has written since he started sharing his thoughts with the investment community back in 2005, which possibly highlights the wide range of complex issues that the leader of America’s top bank has to deal with.

In regards to his bold forecast about an upcoming economic boom, the 65 years old bank executive mentioned that the $3 trillion infrastructure bill proposed by the Biden administration along with the expected “euphoria around the end of the pandemic” should create an economic boom that “could easily run into 2023”.

Meanwhile, despite inflationary risks are certainly a part of the mix, the executive deemed these as “more than temporary”, as the Federal Reserve would rapidly raise rates in a scenario where inflation starts to spin out of control.

Although rapidly rising rates could lead to a sharp recessionary cycle, the head of JP Morgan is forecasting a “Goldilocks scenario” in which the country’s gross domestic product expands firmly while interest and inflation rates rise only mildly.

Dimon’s letter accompanied the bank’s full-year 2020 financial results, with JP Morgan booking a 4% jump in total revenues while seeing a 20% plunge in its net income.

Positive performance in the firm’s Corporate & Investment Bank segment helped offset the declines seen by JP Morgan’s Consumer & Community Banking unit, with CIB revenue jumping 26% compared to a year ago at $49.28 billion while the unit’s net income also went up 43% at $17.09 billion.

Although the profitability from this corner of JP Morgan’s business was quite strong, it failed to fully offset the sharp drop seen by both the consumer and commercial banking units, which saw their net earnings retreat by a combined amount of $9.6 billion, causing the bank to book a 20% drop in its net income, which ended the year at $29.13 billion.

Interestingly, total deposits held on behalf of clients surged 33% during the year, ending the 12 months at $958.71 billion while total loans dropped 7%, going from $473.5 billion to $441.6 billion during the same period.

This divergence between deposits’ growth and loans’ growth reflects the bank’s struggles to keep growing its loan portfolio as credit conditions have tightened as a result of pandemic-related short-term uncertainties.

In this regard, the January 2021 report from the Federal Reserve’s Senior Loan Officer reported tightening conditions for commercial and industrial (C&I) loans to firms of all sizes amid an “uncertain economic outlook” and “worsening of industry-specific problems”.

The survey also reflected that demand for these C&I loans was weaker during the fourth quarter of 2020. However, based on Mr. Dimon’s outlook, a pick-up in demand could help JP Morgan and other banks in boosting their loan portfolios over the coming quarters if they decide to loosen their credit conditions as a result of a more stable economic environment.