After rallying sharply in 2020, fuel cell stocks are having another splendid year. We are less than halfway through January and fuel cell stocks are already sitting on massive year-to-date gains. Plug Power is among the biggest gainers in the space and the stock has almost doubled this year and is up almost 1,500% over the last year.

FuelCell Energy stock is up 70% so far in 2021 and has gained 760% over the last one year. Bloom Energy Corporation is up 25% so far in 2021 and 290% over the last year. The rally in fuel cell stocks gained momentum after Joe Biden was elected as the US president in 2020. The rally got wings after the Democrats took control of the Senate after the Georgia runoff. A majority in both the House and the Senate would give Joe Biden a lot of legroom to pursue his administration’s policies.

Biden’s energy policies are expected to be in stark contrast to his predecessor Donald Trump who was a climate change denier and also pulled the US out from the Paris Climate Deal. The Trump administration favored the fossil fuel energy sector.

In contrast, President-elect Joe Biden has vowed to join back the Paris Climate Deal. According to a statement made during the presidential election race, the Biden campaign vowed that he “will take actions including requiring aggressive methane pollution limits for new and existing oil and gas operations; developing rigorous new fuel economy standards aimed at ensuring 100% of new sales for light- and medium-duty vehicles will be zero emissions.”

Last year, Musk tweeted, “Hydrogen is a light, odorless gas, which, given enough time, turns into people who will make this statement.” In the tweet, Musk apparently targeted hydrogen fuel cell cars. Musk is not a fan of lidar technology also that rival Chinese electric vehicle maker NIO plans to use in its upcoming ET7 sedan.

Meanwhile, according to Hyundai, which has fuel cell cars as part of its portfolio, “Hydrogen Fuel Cell Electric Vehicles (FCEVs) are not hydrogen bombs on wheels. In fact, they are eco-friendly means of transport that filter air while driving, and the only byproduct is water.”

But fuel cell technology has been gaining acceptance

While Musk might have his views on the fuel cell energy sector, it has been gaining acceptance among investors. Earlier this month, South Korea-based conglomerate SK Group announced that it will take a 9.9% stake in Plug Power. The two companies will also form a joint venture to develop fuel cell products for Asian markets. The deal, which is expected to close in this quarter only would see SK Group investing $1.5 billion in Plug Power. 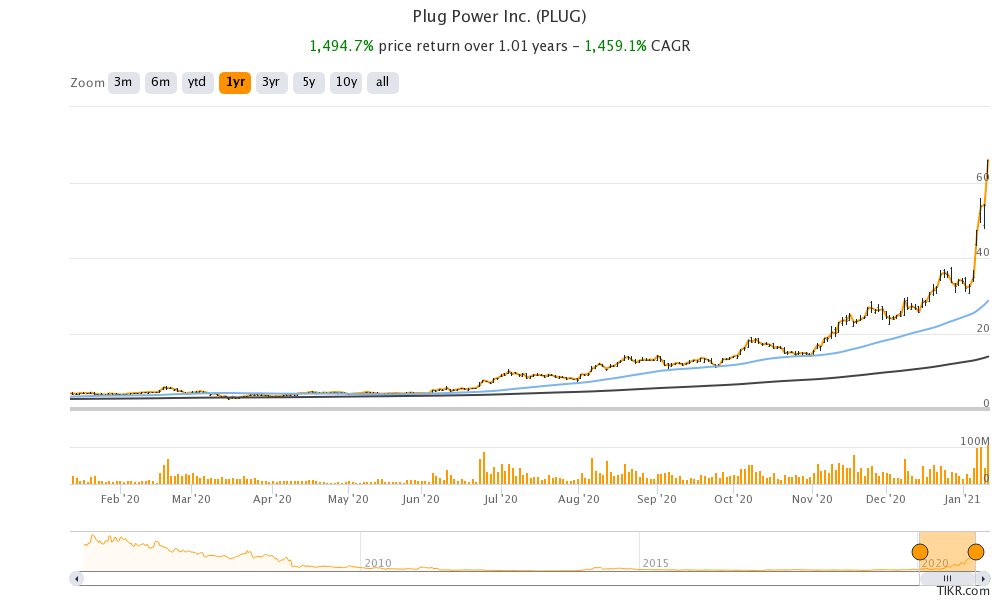 Meanwhile, Plug Power also announced a 50-50 joint venture with Renault. The joint venture is expected to complete in the first half of 2021 and is targeting a 30% market share in Europe’s fuel-cell-powered LCV (light commercial vehicle) market. The release said, “Bringing complementary and competitive strengths together, this joint venture will build on Groupe Renault’s pioneering experience in new energies and strong position in electric light commercial vehicles and on Plug Power’s 20 years of experience in fuel cell technologies and hydrogen solutions.”

Jefferies, analysts led by Jeffrey Osborne expressed optimism over Plug Power and fuel cell technology after the announcement. “We see this as a validation of (Plug Power’s) technical ability in both electrolyzers and fuel cells,” said the analysts. They added, “We are impressed the company secured this win versus French vendors.”

According to Jefferies, “This JV gives us further confidence in our revenue expectations for Plug Power, which we anticipate to be between ($200 million) and ($250 million) for the mobility part of the business in the 2024 timeframe”

The brokerage is positive on Plug Power stock and raised its target price from $50 to $73.50. based on yesterday’s closing prices, it would mean a potential upside of 11.2%. Overall, Wall Street does not expect much returns from Plug Power stock and its average target price is only $42 according to the estimates compiled by TipRanks. This implies a potential downside of 38% over the next 12 months.

That said, when it comes to green energy and electric vehicle stocks, analysts’ target prices have lagged the price action. Tesla and NIO have traded above their average price target for almost a year now. Most of the time, analyst have raised their target prices after the stock has already rallied.

Looking at the one year forward multiples, fuel cell energy stocks might look overvalued. However, one has to take a long-term approach while investing in these stocks. Green energy generated through hydrogen is among the way humanity can address the climate change crisis.

The US rejoining the Paris Climate Deal coupled with the massive investments that Biden has vowed in the renewable energy sector would provide an impetus to demand for green energy and lift demand for the fuel cell technology.

How to invest in fuel cell energy stocks?

You can invest in Plug Power stock through any of the reputed online stockbrokers. Alternatively, if you wish to trade derivatives, we also have reviewed a list of derivative brokers you can consider.

An alternative approach to investing in the green energy ecosystem could be to invest in ETFs that invest in clean energy companies like FuelCell Energy.