Costco will release its fiscal third-quarter 2021 earnings on 27 May. What should you expect from the discount retailer’s earnings and what’s the forecast for the stock in 2021?

Last week, several bellwether retail companies including Walmart, Target, and Home Depot released their quarterly performance. All these companies smashed their earnings estimates. Notably, retail earnings are coming at a time when there are concerns over a slowdown in retail spending. Costco’s earnings this week would be another indicator that would offer insights into the US consumers’ spending appetite.

The April retail sales in the US were similar to March while analysts were expecting them to rise almost 1%. While April retail sales were up sharply from the corresponding period in 2020, it won’t be prudent to look at year-over-year comparisons as consumer spending had stalled in the second quarter of 2020 due to COVID-19 related lockdowns.

However, a flurry of stimulus from the US government helped propel the US economy and consumer spending bounced back amid the fat stimulus cheques. Retail companies including Costco reported stellar earnings over the last two quarters. Amid strong free cash flows, Costco declared a special dividend of $10 per share in November 2020 and rewarded shareholders.

However, as the April retail sales data showed the stimulus-fueled spending boom might have lived its course. That said, a booming US economy and a rapidly improving job market should help keep the cash registers ringing for US retail companies.

Last week, in its report credit rating agency Fitch said that the retail earnings “are proving to be a perfect storm of strength, as ongoing tailwinds from government stimulus and discretionary budget savings from reduced services spend mixed with budding enthusiasm over vaccines, re-openings, and some return to normalcy.”

It added, “Many categories are maintaining the strong trajectories experienced in 2020 with weaker segments like department stores ‘joining the party’ due to easing comparisons and a budding desire to refresh wardrobes in anticipation of more time spent outside the home.”

However, it also talked about a growth cliff for retail companies in 2021 as “budgets are crowded out by accelerating spend on travel, entertainment, and other services.” With over a third of the population inoculated against the coronavirus, outdoor activities have resumed in the US. After AMC Entertainment reopened its cinemas in March, last month Disney too reopened its California theme park after a year of it being shut. 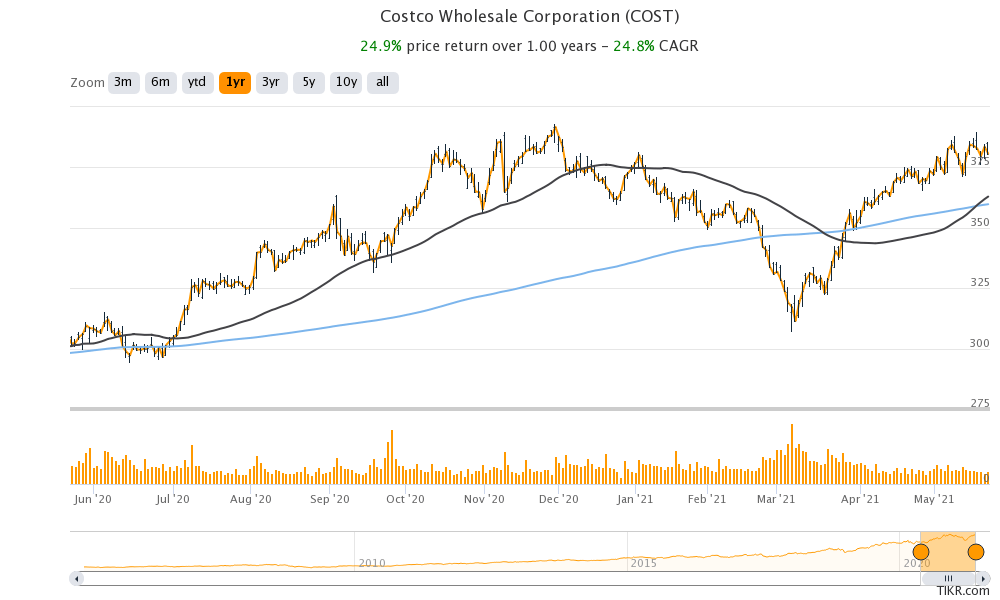 Analysts polled by TIKR expect Costco’s revenues to rise 17.6% year-over-year in the fiscal third quarter of 2021 to $43.8 billion. However, its revenues are expected to fall 3.6% as compared to the previous quarter. The company is expected to post an EPS of $2.28 in the quarter—a year-over-year decline of 3.5%.

What to watch in Costco’s earnings call?

In Costco’s earnings call, markets would watch out for the progression in gross margins as well as the company’s commentary on COVID-19 related costs. During the previous earnings call, the management had said that it expects COVID-19 related costs to fall in half. Also, markets would watch the commentary on the guidance and the outlook for retail sales in the US.

Last week, Ari Wald, head of technical analysis at Oppenheimer issued a bullish note on Costco and said that he prefers the stock over Walmart. “We don’t really have a very strong view on how Walmart’s going to react to a fundamental catalyst in terms of earnings, but where our conviction does lie is that we do expect it to underperform versus the relative strength being exhibited in industry peer Costco,” said Wald.

While Wald said that Walmart stock is showing signs of stagnating near the 200-day SMA (simple moving average). Commenting on Costco, he said “It’s still below its December high but the fact that it’s retraced more of its prior decline going into that first-quarter low is a sign of relative strength. It indicates there’s more support, less resistance. And I think when you do add it up, it does argue for additional outperformance from Costco over Walmart.”

From a technical standpoint, it is a bullish indicator. If the company can post better than expected earnings like other retail companies, the stock could see more upside. It has looked strong after bottoming in March and a positive earnings surprise would keep the bulls charged up.

Should you buy Costco stock?

Costco shares trade at an NTM (next-12 months) enterprise value to revenue multiple of 0.87x and an NTM PE multiple of 36.2x. The valuation multiples are higher than its historical trading multiples as well as those of other retailers including Walmart. However, Costco’s earnings are growing at a fast pace. The troubles at other retail companies would lead to more revenues for Costco as many struggling retail companies might need to eventually shut down amid tough competition from low-cost retailers like Costco and eCommerce companies like Amazon.

For more information on trading in stocks, please see our selection of some of the best online stockbrokers. We’ve also compiled a handy guide on how to short