GameStop released its fiscal fourth earnings yesterday after the markets closed. The stock fell 6% in regular trading yesterday and was down over 15% in the post market trading. Why is the stock tumbling after earnings release and what’re the key takeaways from the earnings release?

GameStop released its fiscal fourth quarter 2020 earnings for the 12-week period ending 30 January yesterday aftermarkets. It posted revenues of $2.12 billion in the quarter which were 3.2% lower than the corresponding quarter last year.

That is precisely what happened when the company released its earnings. Let’s now look at the other key takeaways from the company’s earnings release that will help us why the stock tumbled. 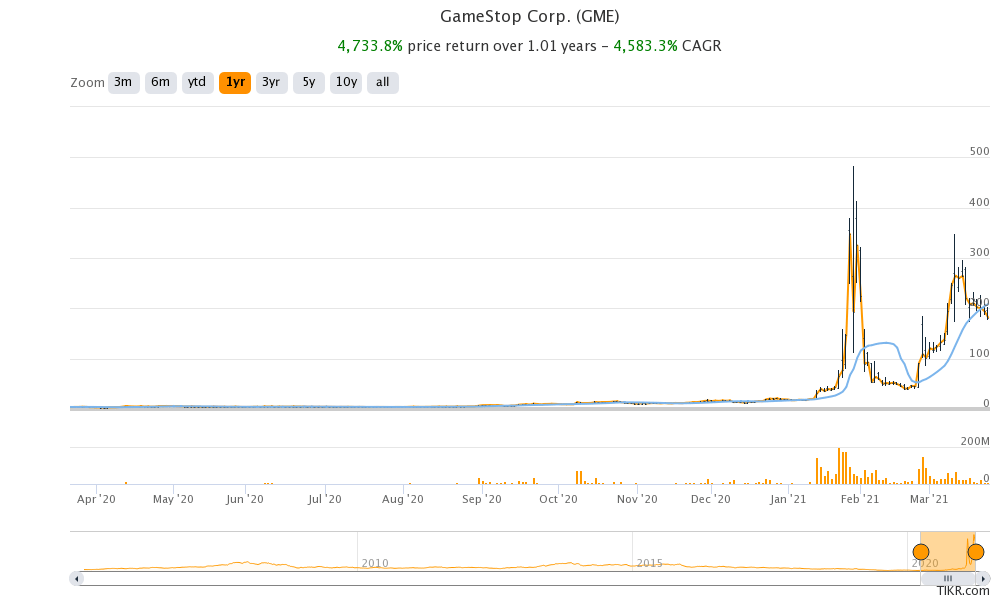 At one point in time, GameStop’s earnings call reached its maximum capacity. However, the company dashed the hopes that the analyst fraternity had of questioning the management after the sharp rise in its stock price. The earnings call was abruptly ended and the management did not take analyst questions.

Looking at the earnings report, there are a few key takeaways. Firstly, GameStop’s online sales continue to soar. The company’s global eCommerce sales rose 175% in the fiscal fourth quarter of 2020 and accounted for 34% of its total sales. The corresponding figure was 12% in the fourth quarter of the fiscal year 2019. In the fiscal year 2019, its online sales soared 191% and accounted for 29% of its total sales.

GameStop management continues to see eCommerce as a key value driver. “As we look ahead, we are excited by the opportunities that are in front of us as we begin prioritizing long-term digital and E-Commerce initiatives while continuing to execute on our core business during this emerging console cycle,” said CEO George Sherman during the earnings release.

Secondly, the company posted positive comp sales growth of 6.5% after many quarters of decline. While store closures and supply limitations dragged down its comp sales, higher online sales and demand for new consoles help the company offset the negative impact. “Notably, console demand remains more robust than we can meet with supply from console makers, and as a result, we continue to see sell-through rates for our console events in a matter of minutes,” said the company in its release.

Third, while GameStop did not provide guidance for the fiscal year, it pointed to strength in February. The company’s total sales in the month were up 5.3% led by a 23% increase in comp sales. The company achieved the feat “despite having permanently closed about 12% of stores globally through de-densification efforts and losing over 36% of store operating days in our international business units, primarily in Europe, due to pandemic-related temporary closures in the month.”

The fourth key takeaway from the company’s earnings call was the appointment of Jenna Owens as its new chief operating officer. She has previously worked with tech giants like Amazon and Alphabet. The move is seen in the light of GameStop trying to project itself as a tech company. “We believe Jenna’s extensive career in technology-led organizations, such as Amazon and Google, are another important addition to our leadership team and our future transformation initiatives,” said the company in its release

The fifth takeaway from GameStop’s earnings release was on the cost cuts. The company closed a net 693 stores in the fiscal year 2020 and managed to lower its selling, general, and administrative cost by $400 million in the quarter.

GameStop is expanding its target market

The final key takeaway from the company’s earnings call was that it is looking to expand its market size. “We are continuing the work to expand our addressable market by growing GameStop’s product catalog. This includes growing our product offerings across PC gaming, computers, monitors, game tables, mobile gaming and gaming TVs, to name only a few,” said the company in its earnings call.

It expects its target market to rise five-fold with the changes. Also, it would help reduce the cyclicity in its business by ending its reliance on console launches.

New stock offering on the cards

In its filing with the US SEC, GameStop hinted at another stock offering. “Since January 2021, we have been evaluating whether to increase the size of the ATM (at-the-market) Program and whether to potentially sell shares of our Class A Common Stock under the increased ATM Program during the course of fiscal 2021, primarily to fund the acceleration of our future transformation initiatives and general working capital needs,” said the company.

GameStop had announced a share offering during the fiscal third quarter 2020 earnings call also. The share offering coupled with a revenue miss triggered a sell-off in the shares and they fell 19% after the release.

The results look no different this time and the stock was trading down 13.6% in US premarket trading at $157.01.