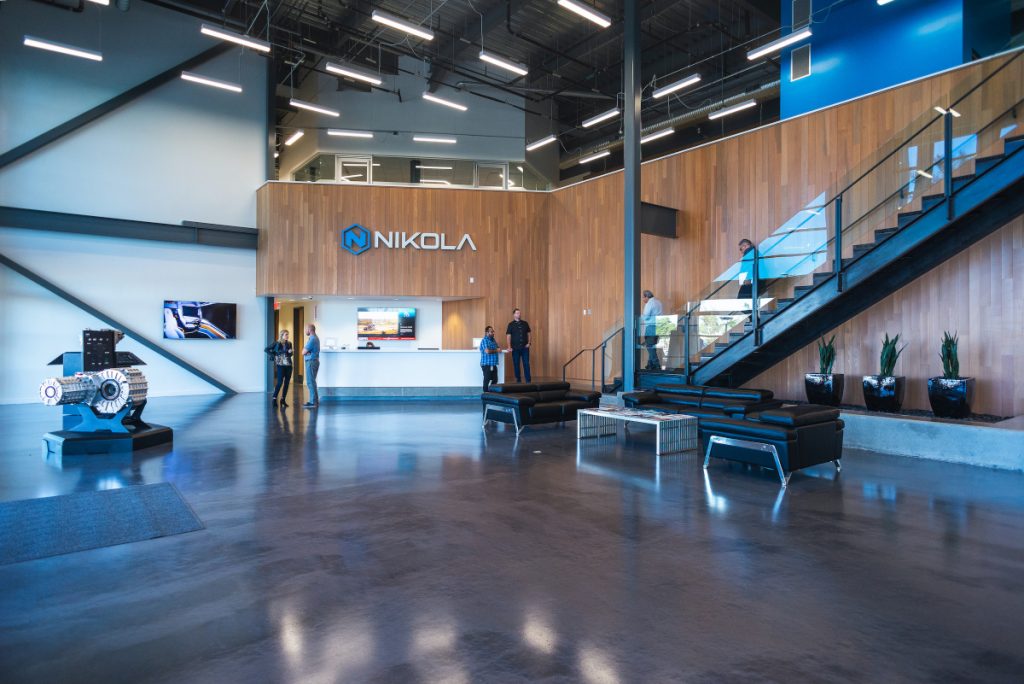 Nikola stock rose over 14% yesterday and was up sharply in US premarket trading today after the company sounded optimistic on its production plans and announced a collaboration with TravelCenters of America (TA-Petro) for hydrogen fueling stations.

Nikola and TA-Petro to collaborate

“This exploration into hydrogen supply expands on our commitment to provide customers the widest range of fuel and non-fuel offerings, and on our Mission to ‘return every traveler to the road better than they came,’” said Jon Pertchik, CEO of TA-Petro.

“This collaboration forms an essential part in delivering the hydrogen-based ecosystem required to advance zero emission solutions for commercial trucks,” said Pablo Koziner, President of Energy and Commercial at Nikola.

Nikola stock is down sharply from the peaks

The rise in Nikola stock is a welcome break for investors. The stock has been on a freefall after having surged sharply in the first half of 2020 when it went public through a SPAC (special purpose acquisition company) merger. At its peak, Nikola’s market capitalization was more than that of Ford, the second largest US-based automaker.

However, things took a turn for the worse for the company after Hindenburg Research accused it of fraud in September, “We have gathered extensive evidence—including recorded phone calls, text messages, private emails and behind-the-scenes photographs—detailing dozens of false statements by Nikola Founder Trevor Milton. We have never seen this level of deception at a public company, especially of this size,” said Hindenburg. 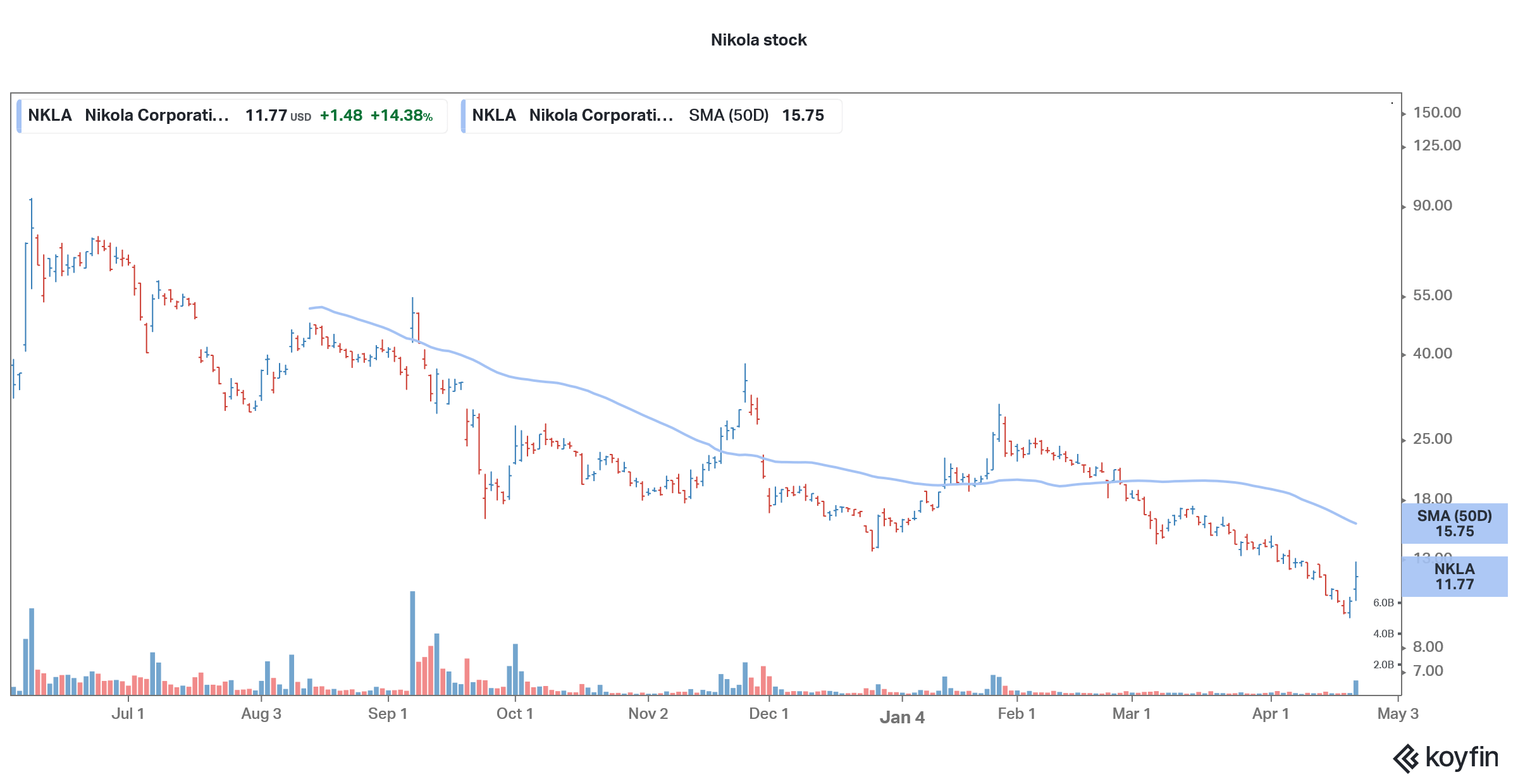 Milton had to quit Nikola

After these allegations, the SEC opened an investigation into Nikola while Milton had to quit the company. General Motors also scaled back its partnership with Nikola after the allegations.

JPMorgan Chase sounded optimistic on Nikola and said that it expects 2021 to be a less dramatic year for the company and forecasted a massive upside. JP Morgan analyst Paul Coster expects 2021 “to be less drama-filled and to turn generally positive” for Nikola. He expected a “steady flow of updates for the truck in 2021, as test milestones are met, as production ramps in Ulm, and as customers submit orders in midyear.”

Now, Nikola looks on track for commercial production. Jeffrey Ubben, a Nikola board member told CNBC that the company is “pretty much on target” on the production plans. He added, “There’s tremendous momentum here. The team is head down here. That’s all I can say.”

The company is expected to begin production this year in Europe while the US plant is expected to roll out vehicles next year. It would be only about execution for Nikola in 2021 and beyond. The company needs to deliver on the execution part which can be a hard part for electric vehicle companies. Even Tesla went through what its CEO Elon Musk called a “production hell” during the Model 3 ramp-up.

Musk has admitted that he was planning to sell Tesla to Apple amid the production issues for Model 3. The stock has risen multi-fold since then as Tesla resolved the production bottlenecks. The company has moved up the learning curve fast and used the know-how in developing the China Gigafactory in record time. Tesla is now coming up with new Gigafactories in Berlin and Texas. Nikola now needs to prove its operational capabilities after the initial hype over its electric vehicles led to a spike in the stock price.

Meanwhile, investors should also be mindful of the intensifying competition for Nikola. Ford would begin delivering its all-electric F-150 pickup truck later this year. The electric version of America’s best-selling pickup truck would be a formidable competitor for electric models from pure-play electric vehicle companies.

Volvo has also announced three new electric trucks “More and more transport companies are realizing they need to start their electrification journey right now, both with the environment in mind and for competitive reasons to satisfy customer requirements for sustainable shipping. With our wide and deep offering, it is totally feasible for far more transport companies to go electric,” said Roger Alm, President of Volvo Trucks. By the end of this decade, Volvo expects electric models to account for half of its sales in Europe.

In the latter half of this decade, Volvo is also planning to come up with hydrogen fuel-powered trucks. While several companies are focusing on hydrogen fuel cell vehicles, Musk has been dismissive of the technology. But then, Musk has been critical of several other technologies including using lidars in autonomous cars.

Analysts are positive about Nikola

Of the eight analysts covering Nikola stock, two have rated it as a buy while six rate it as a sell. The stock’s median target price of $20 is a premium of 70% over current prices. Nikola stock has fallen sharply from the highs amid the sell-off in electric vehicle stocks which was further compounded by allegations leveled by Hindenburg.

You can trade in Nikola through any of the best online stockbrokers. Alternatively, if you wish to trade derivatives, we also have reviewed a list of derivative brokers you can consider.