(August 2012) Warren Buffett has the reputation of being a long-term value investor. However, he is also a great opportunist. During the heart of the financial crisis, he made investments in Goldman Sachs (GS) and Bank of America (BAC) with incredible terms. Through buying preferred securities (a close cousin of convertible bonds), he was able to earn a great dividend, limit his downside and get a good upside. Now, Warren Buffett is showing his shrewdness as an investor in distressed debt.

As of June, Berkshire Hathaway held $900 million of Residential Capital’s (ResCap) junior secured debt. Residential Capital used to be known as General Motors Acceptance Corp. However, prior to the housing market crash in 2008 they became a major mortgage lender to subprime borrowers.  ResCap declared bankruptcy this year and its assets will be auctioned on October 23, 2012. Interestingly, the value of ResCap’s bonds have been steadily rising this year. This is a one year price chart for ResCap CUSIP: 36186CAE3. 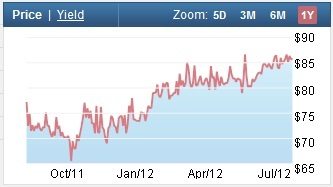 The bonds have been rising because expectations for the auction have been increasing. At first there appeared to be one serious bidder, Nationstar Mortgage Holdings. However, another company, Berkshire Hathaway, has emerged as bidder. There are many that suggest that Berkshire does not want to win the auction for the assets of ResCap and that Buffett’s real intention is to drive the price up for Nationstar. The more the auction brings in, the higher the payout for ResCap’s bondholders (of which Berkshire is one of the biggest). As evidence for this position, those suspicious of Berkshire’s motives point to the fact that Berkshire Hathaway doesn’t have the licenses to run a mortgage business.

They describe Warren Buffett’s thinking as the following:

If he wins the auction, the price that he is getting the company will be low enough that Berkshire will be able to make a good profit. If he loses the auction, he will make more money on his investment in the bond’s of ResCap. He ends up a winner in both scenarios.