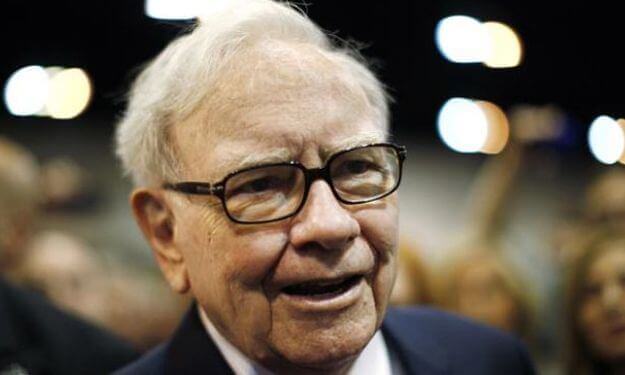 Billionaire investor Warren Buffett has sold off most of his stake in Goldman Sachs (GS), following a series of recent portfolio cuts amid the coronavirus health crisis, weakening long-held ties with the US investment bank.

According to the latest quarterly report on Berkshire Hathaway’s positions, the investment group run by the famous 90-year old investor, the company offloaded more than 84% of its shares in the US bank, reducing its exposure to 1.92 million shares, down from a peak of 18 million shares it previously held.

This latest change in Berkshire’s exposure to the banking sector follows another significant cut in the company’s airline stock portfolio, announced by Buffett during the widely-followed annual shareholder meeting of his holding company last month.

The financial sector has been among the worst affected due to the coronavirus pandemic. The KBE Bank ETF fell 135 last week. Federal Reserve chair Jerome Powell’s comments in an interview on CBS’s 60 Minutes on Sunday added to the gloom for US banks, which are expected to suffer from rising defaults as well as the continued low interest rates.

Both Berkshire and Goldman shares are tumbling this morning, as investors remain cautious about the actual success of reopening economies, since a potential second virus wave remains a concern. 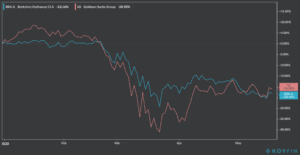 The relationship between Goldman and Buffett can be traced back to a position he took on the investment bank back on 2008, at the height of the subprime financial crisis, when the billionaire purchased preferred shares from the troubled institution worth around $5bn in exchange for a 10% fixed annual dividend.

This move was seen as an endorsement of the bank by Buffett and helped it maintain its independence at a time when a number of investment banks were snapped up by larger universal lenders.

In 2011, these shares were redeemed by the US bank, netting $3bn in profits for Berkshire, while the company increased its stock purchases in Goldman until it owned as much as 18 billion shares of the New York-based bank.

David Kass, a professor of finance at the University of Maryland commented on Buffet’s latest move: “He has this historical relationship with Goldman, so maybe there’s some sentimental value”. He added: “But of course, Buffett’s primary concern is the efficient allocation of capital”.

Berkshire Hathaway and Goldman Sachs declined to comment on the transaction.