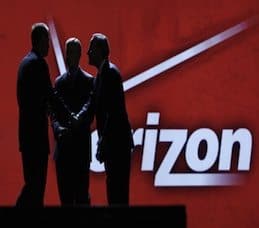 Last week, Verizon Communications announced it would be acquiring the 45% stake that Vodafone holds in Verizon Wireless (VZW). The $130 billion deal’s consideration structure is mostly cash and stock, and it will increase Verizon’s debt by roughly $67 billion. No, that is not a typo. Verizon’s debt will increase by approximately $67 billion as a result of the deal, more than doubling the company’s debt load.

Not surprisingly, all three major rating agencies, Moody’s, S&P, and Fitch, downgraded Verizon’s debt following the announced deal. Moody’s downgraded the senior unsecured debt to Baa1, S&P to BBB+, and Fitch to A-. Moody’s noted the deal “will cause leverage to spike and remain elevated for an extended time frame as higher interest expense and increased dividend payments offset the distributions that Verizon will retain as a result of acquiring 100% ownership of VZW, reducing the amount of cash available for debt reduction.” Additionally, Moody’s expects significantly higher cash tax payments beginning next year to also limit Verizon’s debt reduction efforts. But Verizon, in its September 3, 2013 presentation released along with the deal announcement, noted that it anticipates steadily de-levering and eventually returning to its pre-transaction credit rating. If Verizon wants to keep its stable outlook from Moody’s, it better de-leverage. The stable outlook reflects an expectation that Verizon will use “all available cash to de-leverage until leverage drop below 2.5 times [Debt/EBITDA, Moody’s adjusted].” Since Moody’s expects leverage to still be around 2.7 times at the end of 2015, it will likely be a long time before any upgrade is possible.

Despite the massive increase in debt, it is also important to note the significance of Verizon now having 100% ownership of Verizon Wireless. Assuming VZW continues to be a major player in the wireless market, the additional anticipated cash flows should help support Verizon’s higher debt load. Regarding the debt load, Verizon is expected to begin marketing a $50 billion bond sale this week in what could end up the largest dollar-denominated corporate bond offering in history (assuming it offers more than $17 billion in dollar-denominated debt). As Fitch noted, Verizon entered into a $61 billion senior unsecured bridge financing facility to fund the cash consideration. The bridge facility will buy Verizon time to access the capital markets. We will soon find out whether Apple will keep the honors of having the largest ever corporate bond offering.

If you are interested in initiating an investment in Verizon but are concerned by the eventual share dilution and additional debt burden, you could consider concentrating your efforts further up the capital structure. And rather than waiting for the upcoming bond offering, there are several Verizon CUSIPs currently trading in the secondary market.

After the deal was announced last week, Verizon’s stock dropped nearly 5% before fully recovering by Thursday. The bonds, on the other hand, got slammed and have not recovered. Yes, it is true that benchmark yields rose across the board in the days immediately following the Verizon-Vodafone deal announcement. But rising benchmark yields do not alone explain the huge drop in the price of Verizon bonds. Spread widening also played a major role. The market quickly priced in its perceived change to Verizon’s creditworthiness and, unlike with the stock, the bonds have not recovered.

For example, at the time this article was written, CUSIP 92343VAW4, Verizon’s 6.00% coupon, April 1, 2041 maturing notes, was down a bit over 7% since the deal was announced. TLT, the iShares ETF that tracks longer-term Treasuries, was down just 2.77% during the same time period. And some of that decline was due to TLT going ex-dividend on September 3. The difference between the declines in the longer-term Verizon bond and TLT approximately represents the amount the market sold off the Verizon bond due to the announced deal. The situation is similar for other Verizon bonds, although to different degrees depending on the bond. For example, below is a chart of the 4.75% coupon, November 1, 2041 maturing notes, CUSIP 92343VBE3. Notice the right side of the chart. 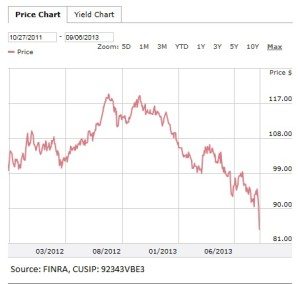 In an environment in which investors are hungry for yield, it is important to keep in mind that an opinion of creditworthiness can be expressed not just through a decision to purchase or avoid a bond, but also through the size of a position. I will address this in more detail in an upcoming issue of the forthcoming LearnBonds newsletter (sign up here). But for now, after the recent plunge in Verizon’s bonds (rise in yields), investors should consider spending time thinking about whether certain CUSIPs are at least worthy of a minimum-sized position.

Please keep in mind that this article is for informational purposes only and not a recommendation to buy or sell any securities. Only you can decide if taking the counterparty risk of investing in individual bonds is right for you.