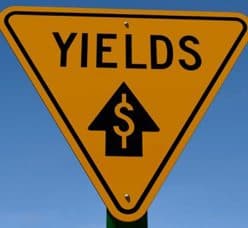 The yield curve is a graph which plots time (from shortest to longest maturity date) on the horizontal access, and yield on the vertical access.  It is used to show the relationship between yield and maturity.

Yield curves work best when plotting different maturity dates for the same type of bond, meaning that the only major difference in the securities is their maturity date. For example, a yield curve could plot maturities and the corresponding yields for treasury bonds, corporate bonds with high credit ratings, municipal bonds from a particular state, or any other type of bond.

By comparing the yields of bonds that are similar, but with differing maturities, we can generate a graph which shows how yields change as the maturity date lengthens. (see examples below)

Why is this the normal situation?  Generally speaking, individuals and institutions prefer to lend money for shorter periods of time, rather than longer periods of time. The risk that the lender will need the funds, or the borrower will be unable to pay, increases with time. Another way of saying this is that the longer the term of the loan or bond, the greater the chance something unexpected will happen.  To compensate for the extra risks associated with lending money for longer periods of time, lenders generally demand a higher rate of interest.

When investors are expecting interest rates to rise in the future, it makes sense that they are going to demand a higher rate of return when buying longer term bonds.  If longer term bonds did not pay a higher rate of interest in this situation, investors would simply buy shorter term bonds, with the expectation that when the bonds mature, they would be able obtain a higher return on the next purchase. Often times, when the economy is coming out of a recession, future interest rate expectations will increase.  This is because economic recoveries are normally accompanied by corporations wanting to borrow more (for investment) which increases the demand for money, putting upward pressure on interest rates.  This results in the yield curve steepening as you can see in the graph below: 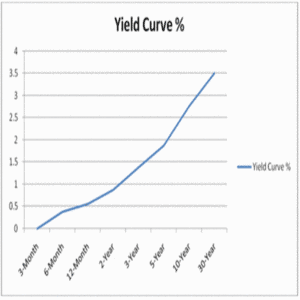 The yield curve is flat when yields of all maturities are close to one another.  This happens when inflation expectations have decreased to the point where investors are demanding no premium for tying their money up for longer periods of time. Like with the inverted yield curve, when the yield curve moves from normal to flat, this is generally a sign of a pending, or ongoing economic slowdown. 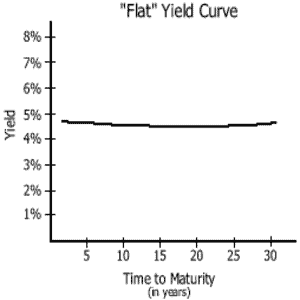 The yield curve is humped when short and long term rates are closer to each other than with medium term rates.   This generally happens when there is either an increase in demand, or decrease in supply of longer term bonds.  In recent years there has been a larger increase in demand for 30 year treasury bonds for example, than for 20 year treasury bonds, causing the yield curve for treasuries to often form a humped shape. 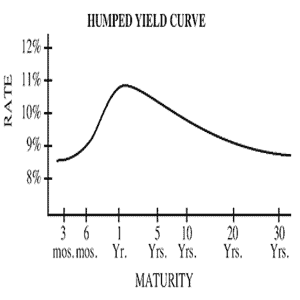 The yield curve inverts when longer term rates are actually lower than short term interest rates.  This happens rarely, but when it does, it is one of the surest sings of an oncoming economic slowdown, as investors anticipate less future demand for money and therefore lower interest rates. 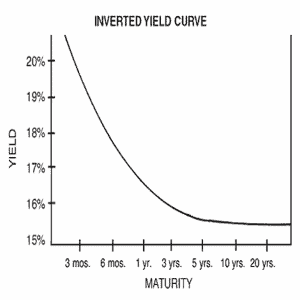