The shale oil industry in the US shows signs of staging a comeback, as companies prepare to turn rigs back on to take advantage of higher oil prices.

As the West Texas Intermediate (WTI), the US benchmark for oil, heads towards the $40 mark, US shale oil companies, such as EOG Resources and Parsley Energy, are preparing to restart their operations.

EOG chief executive, Ken Boedeker, told an RBC Capital Markets conference last week that the company – the largest shale oil producer in the US – is planning to “really accelerate our production into what we see as a price recovery in the second half of the year”, after resuming about a quarter of its output during May.

Meanwhile, Parsley also said it is prepared to restart the “vast majority” of the wells the company shut down in March – around 400 active sites – as it bids to benefit from an upward trend in oil prices, following losses it took during the first months of the year amid production cuts. The producer said it plans to restore most of the 26,000 barrels a day it cut in May.

Output could rise about 2m barrels a day, or 20 per cent, between now and the end of August as the bulk of the supply shut down during the recent price crash is brought back on stream, according to analysts.

The decision from US shale producers to ramp up output by thousands of oil barrels per day is contrary to the commitment made by Opec+ countries on Sunday – including Russia and Saudi Arabia – to prolong the 10 million barrel per day production cut approved on April, which aims to prevent another oil glut that pushes prices down once again.

Saudi Arabia and Russia agreed to curb output under pressure from US President Donald Trump, after a price war between them threatened to destroy the US shale sector. But as US shale producers begin to ramp up production it is unclear whether countries in the Opec+ group will keep their output cuts after the extension runs out at the end of July. 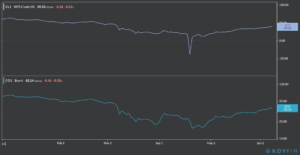 The oil market continues to face challenges ahead, as global demand is still down for the year amid the coronavirus pandemic, which effectively halted air travel and vehicle traffic around the world with people locked down at home to contain the spread of the virus.

Restarting oil wells at this point may not have a positive impact on oil prices in the short-term, even though US shale producers have few other choices as they are in dire need for cash to strengthen their balance sheets.

A note from Standard Chartered Bank said: “If the North Dakota data starts to show the shut-in wells’ tally stabilising and then falling back within the next two or three weeks, we would take that as evidence that the current WTI rally has probably overshot”.