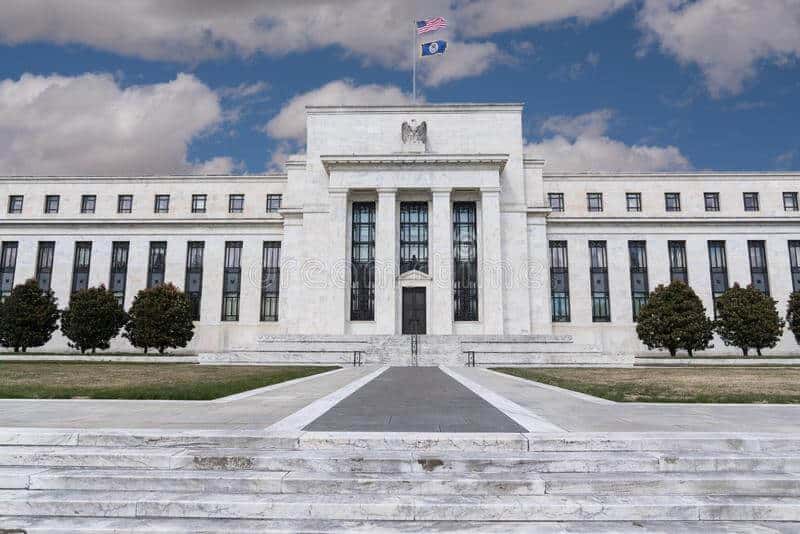 Nervous US banks will wait to see if investors will continue to sell off their stocks following new Federal Reserve (pictured) rules that limit buybacks and dividends.

The stress test report, released by the US central bank at the end of last week, highlighted weaker-than-expected capital buffers if banks were to face a severe economic turmoil and proposed these measures to preserve the integrity of the country’s financial system amid the coronavirus economic fallout.

The Fed outlined what it thought it was the most severe economic stress test scenario possible in February, under the Dodd-Frank Act passed by Congress after the 2008 financial crisis. The tests are for the country’s 33 largest banks such as JPMorgan Chase, Wells Fargo and Bank of America.

However, the central bank now believes the earlier scenario may have fallen short, as the pandemic has since increased unemployment calculations beyond expectations, deepening a potential recession.

The Fed board tightened up dividend payments in two ways. Banks cannot pay out more than what was already paid out in the second quarter. They also must limit dividends to a formula tied to recent earnings.

The bank’s Board of Governors also went on to outline three potential scenarios for the economic recovery, with the worst scenario – the W-shaped recovery scenario – resulting in 25% of the banks covered by the test potentially approaching the minimum CET1 capital requirement of 4.5%. The banks reviewed could incur loan losses of $560bn to $700bn under some scenarios, the Fed found. The central bank did not release the names of the banks in this peril.

The entire sector was affected by the news, as reflected by the 4.3% loss seen by the S&P 500 Financial Sector SPDR ETF (XLF), which tracks the shares of the majority of the largest banks in the North American country.

This current downturn is the first major test of an overhaul the banking industry went through after the last financial crisis. The industry has emphasized that it has significantly more capital to weather a downturn and has not stopped lending to corporations or retail investors.

Stress tests are carried out by the Fed for the country’s largest banks to determine if they could survive a hypothetical financial crisis without needing a taxpayer bailout or being forced to stop lending. 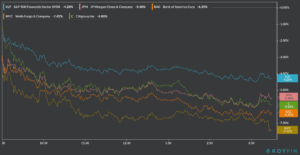 Eight of the country’s biggest banks, including JPMorgan Chase and Bank of America, had already suspended buybacks earlier this year as the economy slowed down amid the coronavirus.

Among the biggest U.S. banks, JPMorgan Chase and Wells Fargo have paid out the most in dividends to shareholders since 2008, about $80 billion each, according to S&P Global Market Intelligence data. Bank of America paid out about $52bn and Citigroup about $30bn during that period.

The Fed’s report comes only a day after another regulatory agency – the FDIC – decided to reverse the so-called “Volcker rule”, a financial-crisis-era measure that prevented banks from engaging in risky investment activities, freeing nearly $40bn in previously locked-in capital that could potentially weaken banks’ financial structures in the midst of an unprecedented economic turmoil.

Sheila Bair, a former chairman for the FDIC qualified the measure as “ill-advised”, saying that the financial system actually needs more capital in rather than out, especially as the economy is approaching “potentially troubled economic times”.