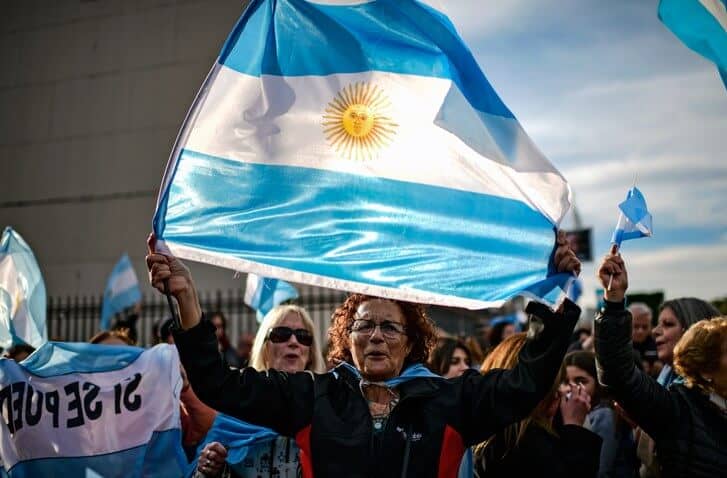 The Argentine peso continued its slide in recent hours, and the South American nation’s risk increased to unprecedented levels since the 2005 administration. The slump occurred shortly after the current government revealed plans to “reprofile” approximately $100 billion of its debt.

The aforementioned scenario has left investors on the lookout, evaluating the possible consequences of the latest government decision. Argentina has been experiencing severe inflation rates for months, but the situation has been worsening ever since the current president Mauricio Macri was severely defeated in primary elections held on August 11.

Fear and Uncertainty: Investors Are Alert

Despite Macri’s inclination for business and enterprise affairs, he lost the primary elections by a significant margin against populist candidate Alberto Fernandez, a Peronist. The situation, therefore, has made investors extremely nervous, as a potential return of the left to the presidency could result in another debt restructuring in Argentina, currently the third-largest economy in Latin America.

A debt revamp was widely expected by the time Hernan Lacunza, the country’s Treasury Minister, reportedly stated on Wednesday that the current administration wanted to extend the maturities here of local debt instruments for the short term. He also stated that the government was open to negotiations with holders of its sovereign bonds and with the IMF (International Monetary Fund.)

Despite the aforementioned scenario, the local currency kept falling, and it decreased 2.6 percent, to 59.65 per each American dollar. The peso has shed 24 percent of its value since Macri’s highly publicized defeat in the primary elections, a situation that has severely cut his chances of being reelected in the official, definitive elections in the month of October.

A tip for bonds trading: the Argentine spreads over safe-haven US Treasury bonds (they measure perceived risk of default) increased 177 basis points higher, and reached 2,249 on Thursday on Emerging  Markets Bond Index Plus at JP Morgan.

Since the industry sees the government’s ability to carry out the debt revamp being so close to the October elections as uncertain, the Merval stock index fell 4 percent at the open. In total, it has collapsed over 45 percent since the primary elections that favored Fernandez.

Tellimer, a developing markets’ investment platform, believes that $7 billion of the short-term debt, $50 billion long-term debt and $44 billion of IMF debt might be destined for a revamp.

The reprofiling, as the process was dubbed by Lacunza, is going to affect institutional investors rather than individual ones.