Tesla Motors Inc (NASDAQ:TSLA) appears to be pulling back on its promise to give users free charging for life, and it’s causing some confusion among the firm’s fans. At the firm’s shareholder meeting on May 6 Elon Musk complained that some users had been using the firm’s SuperCharging for local travel. Soon after the firm’s promotional material began to change, altering the presentation of the network.

Tesla pulls back on the SuperCharger

David Noland over at Green Car reports was the first to notice the change in the Tesla Motors tone. He said that while the Tesla meeting was taking place the firm’s site that promised that “Customers are free to use the (Supercharger) network as much as they like.”

In the days afterward, that statement disappeared and Tesla began sending emails to Model S owners living near to newly opened SuperChargers stating that they were for “free long-distance charging.”

Tesla Motors is gently pushing SuperCharger users to keep away from the network it built for them. There may be worries about capacity, or the costs of serving people who could charge at home. The strategy is firm-wide, it seems, and one user is reporting hearing it directly from the sales team.

Tesla begins to regulate the SuperCharger

David, a new Tesla owner that we got in touch with, was told not to use the chargers if he was staying local. While getting the run down from the sales team David said “it was suggested to us that we not use Superchargers unless we were traveling.”

“We thought this was a little odd since we were under the impression Superchargers were there for us to use as we wished “for life”.” David bought his Model S from Tesla Motors back in May through the firm’s CPO program.

Some reports have said that a Tesla Motors “concierge” has been spotted at one of the busier stations. This person hasn’t been accused of trying to push people away from the charger, and instead appears to be helping people learn how to improve both their charging time and the time they spend charging.

David says that he has, in fact, seen such a person at the SuperCharger in San Juan Capistrano, right at the heart of Tesla country. David says that a young woman approached him when he drove into the station, and plugged in his Model S.

David says that the woman “introduced herself, told us she was with Tesla and observing the Supercharger operation. She asked if we had any questions and gave us some tips for faster charging.  She also recommended the Mexican restaurant across the parking lot in case we were hungry.”

It was a simple, pleasant interaction. “She didn’t ask [where I was going],” he said, “I have Nevada plates so she probably assumed I was traveling.”

There has been no report of the Tesla concierge telling people to stay away from the station if they live in the area, so it’s not clear if the job is linked to the new Tesla line on local charging, but as of now there’s no reason to think the two are part of the same line of thinking.

David says “it’s understandable why they would try to limit it’s use but that’s not what we expected and it’s not how Tesla promoted the benefit.”

The real costs of the Tesla Motors SuperCharger

For Tesla Motors, the cost of the SuperCharger network is all loss. There is no direct gain from the business, so the indirect effect on sales of the firm’s cars is the only way to judge the efficacy of the network. It’s not clear exactly how Tesla puts together the cash to build a SuperCharger, or how it divides the cost between itself and the owner of the space.

TechCrunch managed to get its hands on some documents in 2013, just as the SuperCharger network was growing, that showed that it cost Tesla Motors between $100,000 and $175,000 to put up the SuperChargers back then.

Tesla paid all the costs of putting the station together according to that info. It seems that the owner of the property has to put up the space needed to get the SuperCharge in place, but they get steady traffic of wealthy Tesla Model S drivers to their business as a result.

The most recent Tesla Motors annual report, for the year ended December 31 2014, doesn’t give much specific data on the firm’s SuperCharger network cost or value. The firm has total assets of $1.8 billion in property, plant and equipment at the end of last year, but that includes almost everything Tesla Motors owns.

What is clear from the report, however, is how much cash Tesla thinks it’s getting for use of the SuperChargers. The firm had deferred $25.6 million in sales related to the SuperCharger in 2014. That’s how much money the firm has collected in order to pay for free use of the chargers for life, and given the change in the way the firm is selling those stations, it may not be enough to cover costs.

Tesla Motors is in financial trouble, despite the recent $500 million credit agreement it reached with some major Wall Street banks. The firm is burning through cash quickly, and it needs to make sure that it has enough in the bank to fund the rollout of the Model X EV SUV later on this year, and the Model 3 mid-range car that it plans to bring to market by 2017 or so.

The firm may want to control costs, or it may want to make sure that long range users get what they need. Tesla as a firm is all about giving buyers the best user experience possible. If long lines at SuperChargers are killing time for users, it needs to find a way to control it.

Tesla Motors still has a long time to refine these policies and make them work for the normal Model X, Model S, and Model 3 owner, and the push to using the stations for long range charging is part of that.

Free stations are no good if you can’t get a space, and if there really are 500,000 Tesla Motors cars on the road by 2020, as Elon Musk predicts, space is going to start getting much rarer.

For now the firm is taking a soft line with those using the SuperCharger, and friendly reminders are all the firm is using to change the policy won’t offend those who don’t agree all that much. 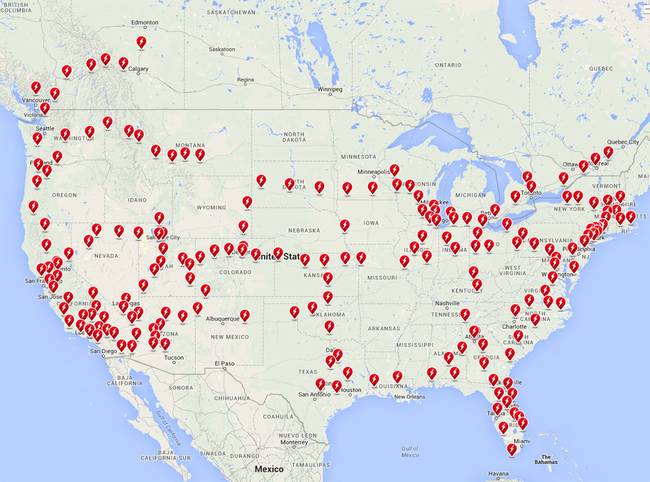