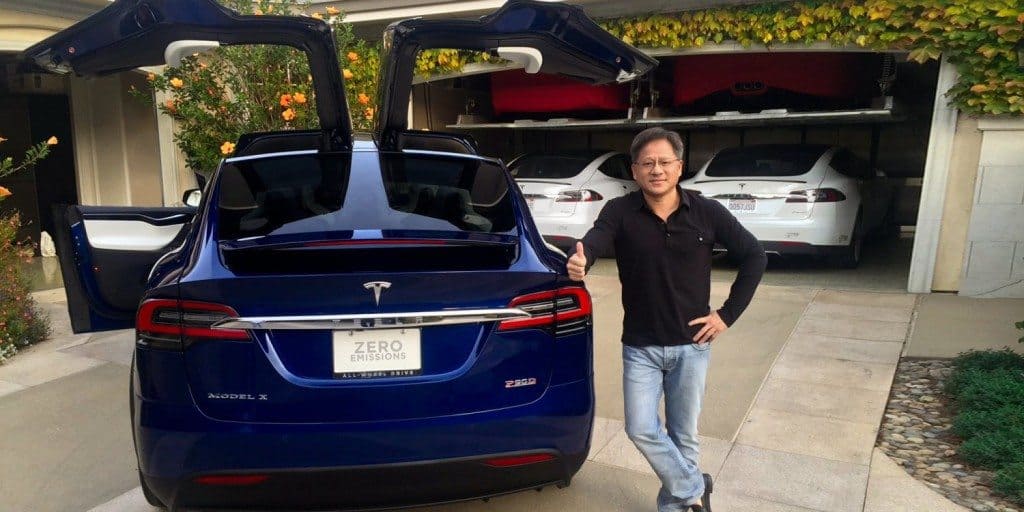 Tesla Motors Inc showed off the Model X, one of the world’s most impressive pure EVs on September 29. The firm put six cars on stage, and got them, the “Founders Editions,” to their owners by the end of the night. Since then, despite being very loud about a number of other things, we’ve heard very little about the Model X from Tesla Motors.

That was until Tuesday when NVIDIA Corporation  CEO Jen-Hsun Huang posted a pic, through the firm’s official Twitter, of his brand new Model X. Mr. Huang was not one of those that got his Model X on stage on September 29. That means that Tesla Motors is, however slowly, still building the Model X in Fremont.

It’s arguable whether you can lump those willing to pay more than $100,000 for a brand new EV, and willing to wait more than two years to get it, “normal.” In any case Tesla Motors still hasn’t shipped the Model X to any of those that booked the car through the normal channels. The units of the car shipped on September 29 were Founder’s Editions, as was the one snapped by Mr. Huang at his home.

NVIDIA makes the chips that power the software on the Model S and Model X, and the firm has been a big supporter of Tesla Motors for a long time. You can likely tell the level of support by simply looking at the garage behind the firm’s CEO in the above pic. The Model X isn’t the first time he’s shelled out for a ride from Tesla Motors.

A certain Tesla Motors Club forum member has been confirmed as holding the second Signature booking of the Model X. She would be in the first batch of deliveries, though not necessarily second in line, once the Model X is ready to roll off the line in Fremont. There’s been no report of that happening, and Tesla Motors really seems to be having a hard time getting the car out the door.

Tomorrow will mark one month since Tesla Motors  said it had launched the Model X. That launch date was set to coincide with a deadline that Elon Musk had verbally imposed on the firm. He had been saying, since late last year, that the Model X will arrive before the end of the third quarter. It did, but it clearly wasn’t ready for prime time just yet.

Model X shipments are going to be a key part of the way traders, and the auto world, judge Tesla Motors in 2015. The firm’s build out of its second production line, along with its third car ever, is a major expansion. It’s one of the first major moves the firm has made with the full light of the world stage on it, and there’s lots of people ready to write the firm off as a result of missteps.

Auto industry veteran Bob Lutz, writing for Road and Track, reckons that Tesla Motors has shown that the auto world is too much for it already. It’s clear from the firm’s massive share price that Wall Street hasn’t given up on the firm just yet, and there’s a lot of reasons to think that Tesla Motors can survive a little delay in the shipment of the Model X.

Piling on the risk, delaying returns

Any person with shares in Tesla Motors should be ready to admit that they’ve bought a very risky piece of paper. There are hundreds and thousands of things that could destroy the future that Elon Musk hopes to build with his range of EVs. From a serious recall, to a stock market collapse, Tesla Motors is faced with huge risks going forward.

As we head toward the release of the firm’s earnings numbers for the third quarter, due on November 3, it’s a good time to remember that a delay in the release of the Model X isn’t likely to be one of those risks. Sure it might hurt the firm, and it might lead to more than a few people cancelling their booking for the EV SUV.

In the long term, however, the slow roll out of the Model X will be forgotten just as long as Tesla Motors can meet its other targets. What the Model X says about those targets is another thing. Elon Musk has freely admitted making quite a few mistakes with the design of the Model X. The car is great, but it’s just too difficult to build.

If the firm can’t fix those errors as it heads toward the release of the Model 3, and the opening up of its mass market hopes, then Wall Street will lose confidence. It’s that confidence that keeps Tesla Motors’ staff paid on a daily basis, and its withdrawal forms the base mechanism of how most risk can take its toll on Tesla Motors.

For now, however, those with long term dreams about the future of Tesla Motors should likely stop looking at the charts. It’s going to be a volatile time for the stock heading into next year. That’s why analysts like Baird’s Ben Kallo downgraded the firm after the release of the Model X.

Anyone who says they know where the shares are going heading into earnings, and beyond, aren’t worth listening to, whether or not they carry the name of a major Wall Street bank. Tesla Motors stock, and the wider market, is just way too volatile right now to be able to predict. That’s if stock markets can ever be predicted by anyone at all, an idea that’s controversial in itself.

After the bell rings on November 3 Tesla motors will show off its earnings numbers for the three months through September. We know that the firm missed its sales targets for the third quarter, we know that the Model X is running very late and may be interfering with the Model S. A lot of people think that Tesla Motors won’t be able to hit 50,000 sales for the full year.

For those looking to the long term, those are very minor changes in the Tesla Motors story. An up and coming firm isn’t going to get everything right all the time, and even the biggest firms out there make mistakes. What makes Tesla Motors special is a unique grasp of the tech needed to sell EVs, and a first mover advantage. That’s why Wall Street, despite the slew of downgrades in recent months, still thinks Elon Musk is a man worth betting on.