Tesla Motors Inc is going to have the Model X on the road very soon, and the number of pictures of test versions of the Model X is grow with each passing day. It appears that Elon Musk’s firm has already set up the factory line to build the SUV, and tours of the factory appear to be taking place once again.

We’re not sure what the Model X will look like on release, but we assume it will be something close to the units that are being tested on roads in California and, in recent week, further afield. From those pictures, many of which you’ll see below, we know one thing. Many people hate the Model X as it appears right now.

Most of the Tesla Motors Model X pictures that have appeared so far have surfaced either on Reddit or on the Tesla Motors Club forum. The people that frequent those forums are big fans of Tesla Motors by and large. Many of them aren’t so sure about the Model X they’ve seen in the leaked photos.

In August of last year on user on the TMC forums, who said that he had already booked a Model X, posted a topic with the title, “I put deposit on one… but Wow! it’s plain! (dare I say ugly?) Or is it just me?”

He said that “every time I see one, I almost shudder at its ugliness.” Other users chimed in with agreement, though there was nothing unanimous about the judgement.

Another topic, posted under the title “Model X looks like crap” saw a user explain the problem as they saw it, “the Model X is bulbulous in comparison to the Model S, which makes it look like they inflated a Model S.” Bulbulous, is, by the way, the only adjective that accurately describes the shape of the Model X.

These opinions are based on the release pictures from the Tesla Motors unveil of the Model X back in 2012, and the leaked pics of the mule on the road. 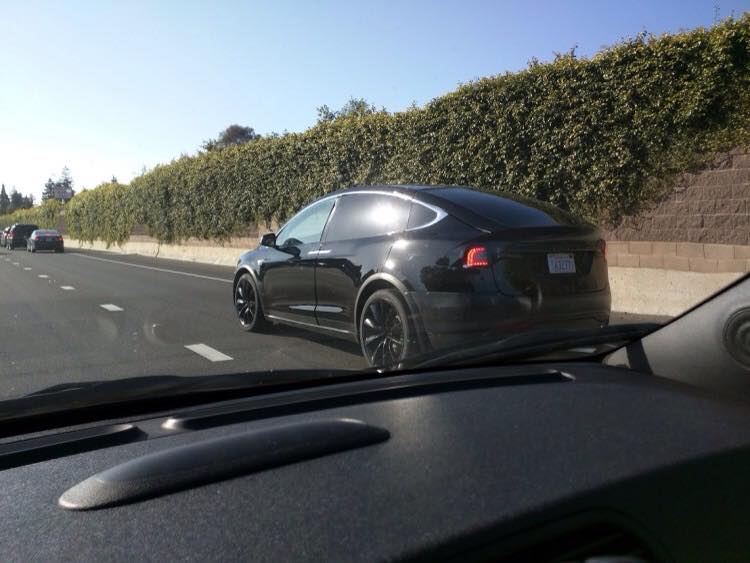 The above picture is a prime example. In a Reddit thread about it, one user who said they liked it wondered whether they were “taking crazy pills.” Another said “When carefully photographed, it looks good, but without deliberately setting up pa flattering angle it just isn’t a very attractive car.”

The Model X has been compared to the Pontiac Aztec, and a “Model S with a cabin pressure problem.” The disgust is by no means from everyone, but a lot of Tesla Motors fans don’t like the way the Model X looks right now. They have another couple of specific problems with the leaked pics too.

Tesla Motors may be making a joke with the test Model X units. The doors on the versions of the SUV we’ve seen out in the wild don’t align. That’s clear whether the Model X is being driven cross country or just on city streets.

The Model X in the picture above has clearly seem some things a normal car wouldn’t, but it looks like there’s issues with the door. The falcon wing doors, which are rumored to have caused some of the issues that delayed the Model X are not flat on the body, and don’t line up as they should with the front door.

The above video was posted on Reddit by ben174. He added, in a comment, that “If you look closely you can see the seam for the door is very misaligned. I’m sure the final production version will look more smooth. Those Falcon doors seem to have been quite a challenge to achieve.”

Almost every single leak of the Model X contains a comment like this, and some members of Tesla Motors discussion boards are willing and ready to leap to the defense of the unreleased SUV.

FoxhoundBat, a Reddit user who responded to be174’s comment said “These are Model X prototypes. They are beat up to hell and back. They often lack the plastic trim around the wheelwells and other cosmetic details but people never seem to notice them.”

We’re not sure what the release version of the Model X will look like. If it’s anything like the units we’ve already seen in leaked pictures it’s not going to impress everyone. Given the comments, it’s not even likely to impress every fan of Tesla Motors and Elon Musk.

The Model X has been getting hate ever since it was first revealed to the public back in 2012. Right after the initial reveal Mark Wilson at Fast Company took particular umbrage with the design of the car. He said it was “an uninspired yuppie-mobile (do they still make yuppies?), a pornographic attempt at erotica.”

He added that “Not a single statement within the design is confident enough to say ‘I’m a Tesla, dammit’. Instead, designers attached these doors to do the shouting instead.”

Mr. Wilson likely didn’t know at the time he wrote his piece that he was talking about an EV SUV that would not appear for another three years. James Sanford, portfolio manager at Sag Harbor Advisors said, in a piece for CNBC earlier this year, that the Model X was a “hump” that wouldn’t please its core market.

There’s a long history of making judgements on the Tesla Motors  Model X without knowing exactly what it is. That’s going to continue for another couple of weeks at least.

Elon Musk said he’s going to get the first Model X units to their owners, in small numbers, before the end of the third quarter. Given the quality, and color, of some of the latest Model X units we’ve seen pics of in recent days, it appears Tesla Motors has some units very close to finished.

That means that we’ll finally be able to see the way the Model X really looks in the next few weeks. We’ll be able to see whether the doors end up misaligned after a few hard bangs, and if it really ends up as inflated as it appears in the leaked pics.

It’s not clear if we’ll ever be able to say definitively whether the Model X is a “pornographic attempt at erotica.” That’s for every Tesla watcher to figure out on their own.