Tesla Motors Inc has finally given us a small glimpse at the Model X. The EV SUV’s Design Studio went on line for those who booked the Signature Edition on Tuesday, and it’s already made a splash. 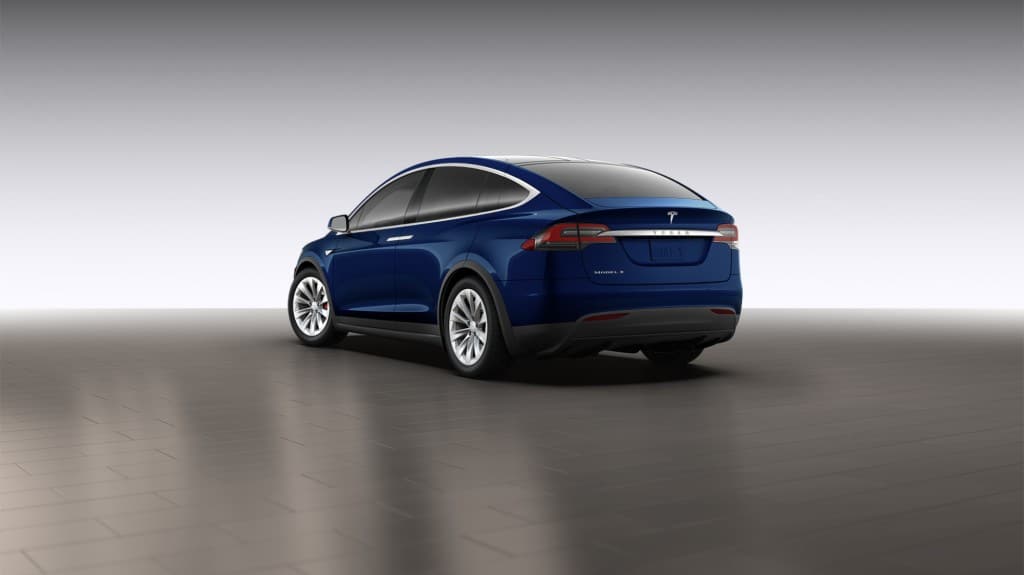 Here’s a look at what the Model X looks like now, and what to expect from the next great EV when it starts to arrive over the coming weeks. 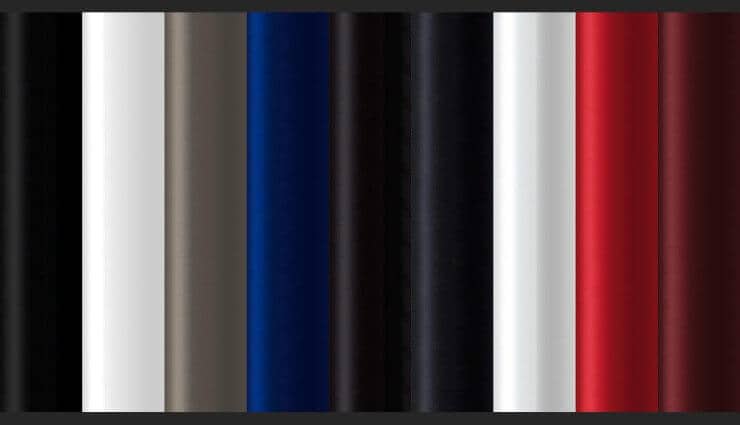 The above graphic shows the colors available for the Signature Model X.

The Model X Performance will have a range of 240 miles with a battery of 90 kWh. That means that the car’s efficiency is much less than  that of the Model S. A Tesla Motors sedan with a power pack sized at 70 kWh has the same range of a Model X with a 90 kWh battery.

Part of that comes from the increased weight of the SUV. The Model X, is about 10 percent heavier than the Model S. The Signature cars are also the Performance edition. That means they move faster, but they’re less efficient than the mass produced version of the Model X we’ll finally see.

The car is going to start at $132,000 for the signature version. Once the mass production Design Studio arrives we’ll be able to see how much the normal version will go for. Tesla Motors said, in an email, that “The Model X options and prices will be comparable to current Model S.” That means a much less expensive option, somewhere around $70,000, should be available.

It seats seven people, and it has room for a huge amount of luggage in the front and back of the car. The Model X also has all of the Autopilot hardware that’s in the Model S. Like the Model S, however, it doesn’t have the software to put it to its promised use.

The Falcon Wing doors that are one of the most eye-catching features of the Model X have sensors that will allow them to open without smacking into the roof, no matter the height of your garage. 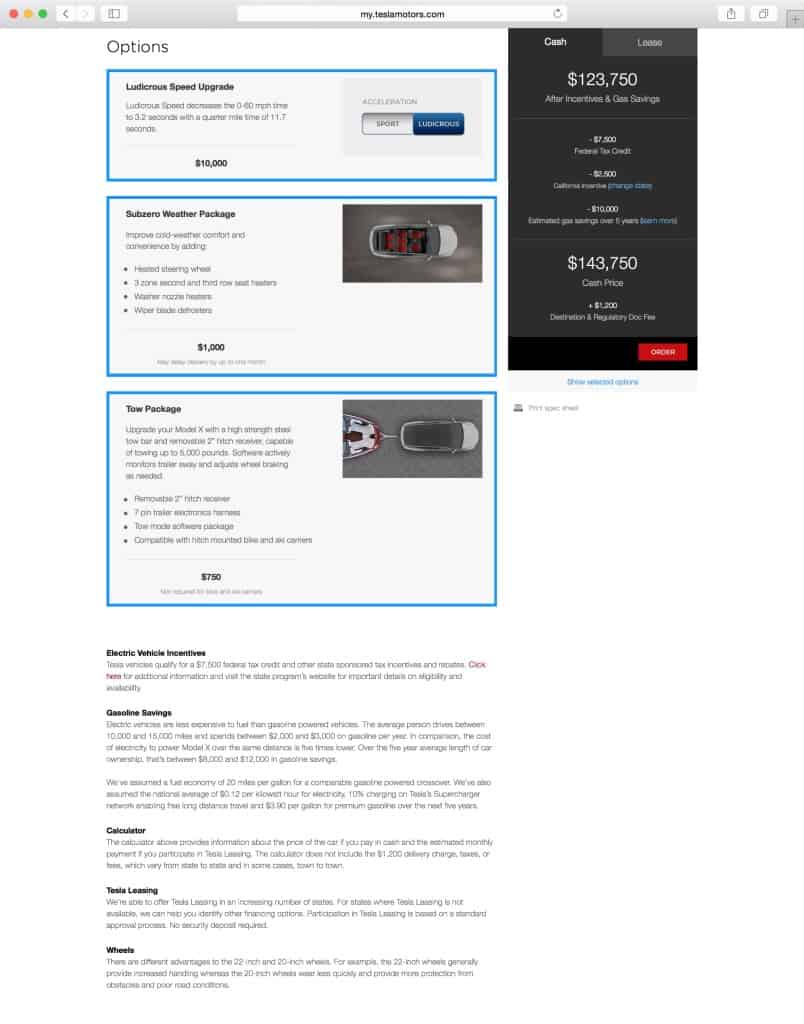 The Model X windshield is also something a little bit special. The glass extends above and behind the head of the driver and front passenger allowing a panoramic view while on the road.

A $750 option will give the buyer a towbar, while shelling out $1,000 will allow users to bring their Model X into the toughest of Winters, with heated seats, a heated steering wheel and more helping the Model X survive the cold.

What about those Model X seats?

Tesla Motors didn’t give everything away in the design studio, and the firm seems willing to let those who booked the Model X wait before they find out how some of the key features of the EV will work.

The second row seats, which Elon Musk has promised will be one of the most exciting features of the Model X, are a mystery. We can glean some info from the pictures that arrived out of the Design Studio, however.

Some forum users have taken a guess at how the Model X second row seats might work. The below image makes the mechanism a little more clear, and came from Reddit. 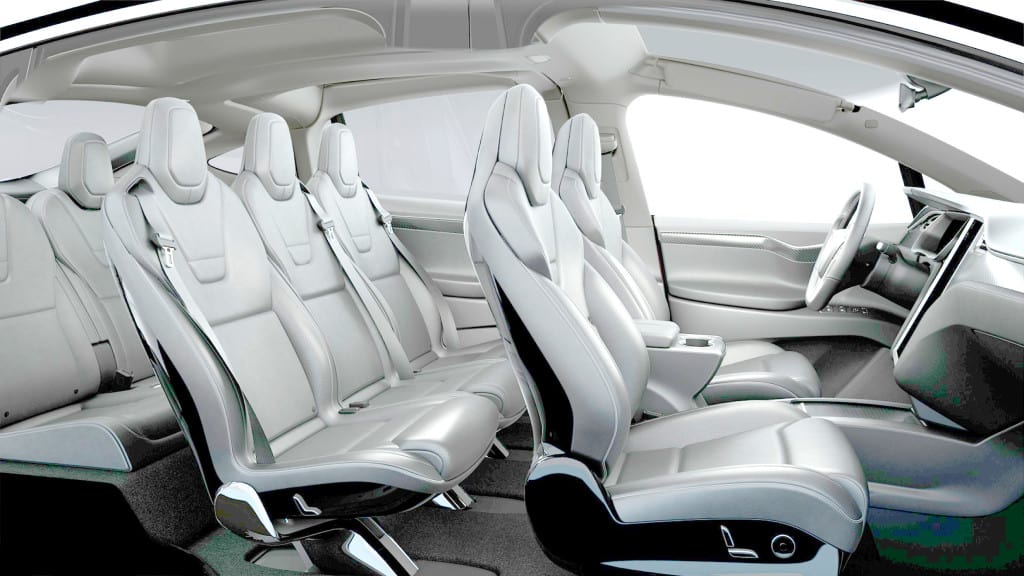 The seats in the second row attach to the floor at a single point. One user said “Looks like they’ll only slide forwards and backwards. There doesn’t seem to be any hinge for the backrest of the middle row to recline or fold (the first and third row do have hinged backrests).”

Another speculated that “I reckon the whole seat will pivot, about whatever the mounting point is on the legs. Also the cutout running down the front face of the leg make it look like the seat will almost slide in under the front seat as is without folding.”

We’ll have to wait for somebody to actually get their Model X before we can be sure about the workings of those seats.

When will we see the Model X

The photos from the Model X Design Studio leave a certain amount to the imagination. That’s likely part of Mr. Musk’s plan to heighten interest about the car. Tesla Motors won’t show off the full features of the Model X until the first unit arrives to the first buyer.

Elon Musk will appear on Steven Colbert’s Late Show on September 9 and may use his time on the show to let us know a little bit more about the Model X. Between now and then we may find out a little bit more about the car, but it’s likely that Tesla Motors will stick to its promise and not give us all the info until the Model X is on the road for real.

Tesla Motors expects to ship just a handful of units of the Model X before the end of the third quarter. Morgan Stanley analyst Adam Jonas, who is the most bullish Wall Street voice on Tesla Motor , is looking for the firm to make and ship around 50 Model X units before September 30.

Those who are lower in the queue for the Model X will still have to wait months and months before they can get their hands on the SUV. There’s more than 20,000 people with money down for a Model X and after Elon appears with Steven Colbert next week that list is likely to get even longer.

In a recent letter Tesla Motors said that production would not ramp up until the end of Q4. That means only a couple of thousand Model X units are likely to be on the street before the end of 2015. Those who book after seeing the first real pics are going to be waiting quite a while.