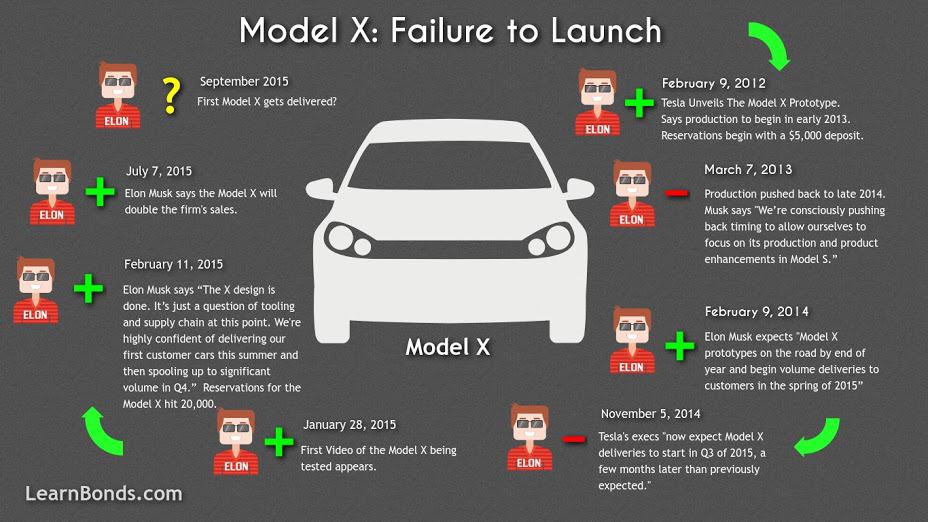 Tesla Motors Inc (NASDAQ:TSLA) is going to deliver the first Model X before the end of September. Elon Musk, the firm’s visionary CEO, has confirmed that delivery himself, but he’s been known to promise a lot and fail a little along the way. The truth is that this isn’t the first time a date has been set for the release of the Model X. Our infographic, which can be seen below, takes a look at the history of Model X launch failures.

This time feels more real. Tesla Motors has kept to its promise of a release in the third quarter of 2015 since November of last year, and Elon Musk has said himself on many occasions that the first delivery will come before the end of September. On Wednesday July 7 he said that he expected sales at Tesla Motors to double on the back of the release of the Model X.

While that hope rises, fans of Tesla are still asking what went so wrong with the Model X, which was shown off for the first time in 2012, to delay its release for so long. Here’s a look at the problems that have plagued production.

Perhaps Elon Musk and the other leaders at Tesla Motors weren’t expecting the Model S to sell at the level it did in 2013 or maybe they changed their plan for the future of the firm half way through the design of the Model X.

In March of 2013 Mr. Musk said that he and his team were “consciously pushing back timing to allow ourselves to focus on its production and product enhancements in Model S.” More than two years later, the Model S has seen many improvements and demand for the car is still high.

Tesla Motors made 35,000 Model S units in 2014, and managed to sell almost all of them. The firm began to add hardware needed for Autopilot last September and is just waiting to release a software update to let people’s cars drive themselves, in a limited way of course.

New versions of the Model S have also been released by Tesla Motors, including the D Models and the new 70kWh model that replaced the 60kWh Model S launched on April 8.

The Falcon wing doors on the Model X are going to be the biggest point of contention for those buying the car. Some people really love them. Some, like Mark Wilson at Fast Company, think that they are part of a “pornographic attempt at erotica.”

According to Wilson, who was writing about the design after it first appeared in 2012, “Not a single statement within the design is confident enough to say “I’m a Tesla, dammit. Instead, designers attached these doors to do the shouting instead.”

Tesla Motors may have erred on the side of overconfidence when it showed off the Model X design in 2012. After it showed the world those falcon wing doors, it simply couldn’t take them back. The problems with the falcon wing doors are the same as those with every gull wing door ever made.

Right after the February 2014 delay in the Model X launch it was widely rumored that Tesla Motors was having trouble getting the seal on the falcon wing doors right. Musk said after that delay that the Model X needed some “creative problem solving.”

Keeping out the wind and rain with gull, or falcon, wing doors is a challenge, and the minds behind the Model S spent months and months trying to figure it out.

Patrick Archambault from Goldman Sachs managed to get some more info out of Mr. Musk at a shareholders call in November of 2014. Mr. Musk explained that making a great car wasn’t hard for Tesla Motors, but “making lots of something consistently that’s going to last a long time is extremely hard.”

He went on to say that the issues with the powertrain and the other tech in the car were mostly solved because they were the same as used in the Model S. The doors were still causing some problems because of their novelty “we’re adding some very new stuff that’s really not out there, that never really has existed in a way that was useful.”

In March of 2014, more than a year after he was supposed to launch the Model X Mr. Musk took some, but only some, of the blame for the delay in the release of the car.

Explaining away the delays of the Model X at that point, in February of that year Tesla Motors said the Model X would be on the road by December, Mr. Musk said “I’m somewhat of a perfectionist.”

“I really am quite insistent that the production version be superior to anything we’ve demonstrated before,” Musk told Bloomberg at the same time.

Elon Musk doesn’t just want to release a car, and he can’t afford to do so. He needs to create a cultural phenomenon with the Model X in the same way he did with the Model S.

Releasing a Model X with seals that break down after two years won’t do for Tesla Motors, nor will a falcon wing door that seems like less of a feature and more of a gimmick. Everything about the Model X needs to be on point, and Elon Musk won’t let it out of his sight until he’s gotten it there.

Right now Tesla Motors appears to be happy with the Model X. Back in February Mr. Musk said that the design of the car was done. That doesn’t mean there won’t be challenges ahead, but it means we might actually get to see the SUV some time in the early fall.

We know that the Tesla Motors Model X is in production because Brad Erikson from Pacific Crest visited the factory when the firm’s staff were being trained on how to put the car together, but Tesla Motors says we’re not going to get any update on specs until the first car leaves its Fremont factory and gets to its first buyer.

Tesla has another three months before it has to get the first Model X out of its factory. Rumors are doing the rounds, however, that the firm will get a small batch of those Signature Model X SUVs out the door early in order to secure the first deliveries of the device long before the quarter ends.

With the firm’s stock down strongly in recent trading, and Elon Musk being known to make big announcements when shareholders are losing faith, the shipment of the first Model X could come at any time.

Steve Jurvetson, who invested in Tesla Motors early on, received his Model S more than two weeks before the car began normal shipping to buyers. Mr. Jurvetson, or Mr. Musk himself, might be driving around in a Model X sooner than most think.