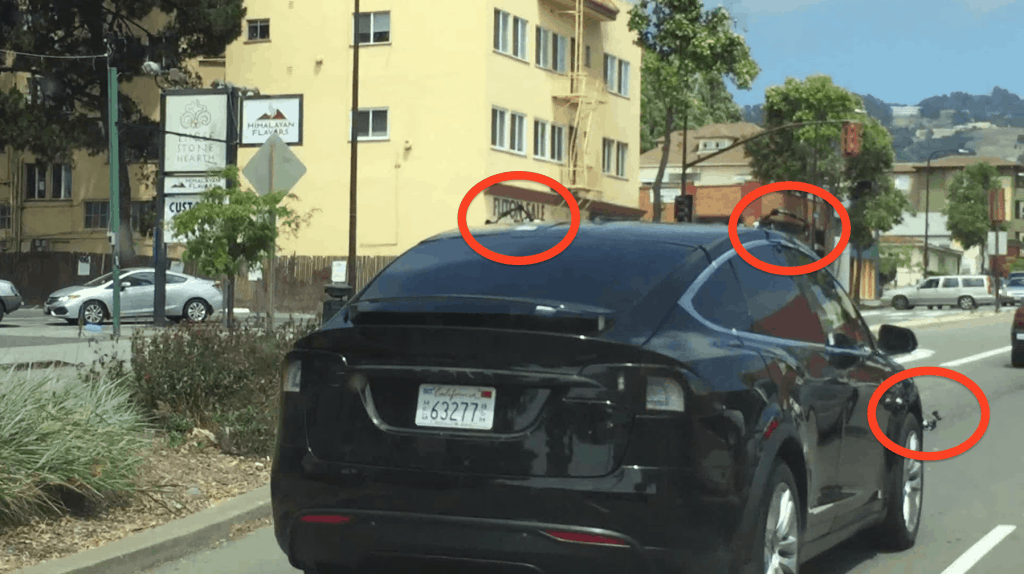 Tesla Motors  is constantly rolling out new features for the upcoming Model X. CEO, Elon Musk revealed last month that he has been personally testing out the autopilot features in his ride. Business Insider reports that the Model X has been spotted with some mysterious sensors that have not been seen in earlier prototypes.

New Sensors and What They’ll Possibly Do

The picture above shows a Model X prototype on the streets of Berkley, California. In the picture, the prototype Model X has some sensors suction cupped to the body of the car. The sensors were seen on the top of the car and on its front bumper. They can be seen inside the red circles in the image.

The explanation for the mysterious sensors is that they are probably front-facing cameras, front-facing radar, and 360-degree sonar and/or radar. The sensors will definitely not be sticking out of the cars like antennas when the Model X hit the roads.

The sensors will most likely help Tesla Motors in its plan to bring a form of autonomous driving to its cars. For instance, the 360-degree sonar radar and front-facing radar will be used to detect bodies in the immediate environment of the car.

It will detect other cars, road users, and obstacles on the road. The front facing camera will also be useful in reading road signs and then relating it to the control system of the car.

In another YouTube video, the Autopilot Demo Release 6.1 for Tesla Model S P85D was shown at work. The car was shown stopping by itself at a stop sign. It was following another car at a comfortable distance; it picked up the pace and slowed itself down as if on cue.

When is Autopilot Coming to the Market?

Tesla Motors  has not confirmed or refuted the presence of the sensors in the Model X or what their function will be if they are added to the Model X. Business Insider reports that Tesla has said it “can’t confirm any details of Model X or the equipment you’re referencing.”

Tesla has hinted that the delivery of the Model X will start before the end of September. However, investors and consumers are subconsciously prepared for a delay true to Tesla’s style. The exact specs of the Model X are kept out of public knowledge and it would remain so until the Model X hits the street.

However, the question now is not when the Model X will hit the streets, but if the autopilot feature will be featured in the car.

The Race for the Self-Driving Car

The autopilot feature brings Tesla Motors   nearer its goal of having self-driving cars on the road within the next three years. Google’s self-driving cars are already being tested on the streets of California.

Tesla Motors said that it would get Autopilot features to Model S drivers this Summer, but some were disappointed by the lack of a reveal last Friday. Tesla says that it is still testing version 7 of its software. When the update to that version comes it’s expected to bring autopilot features to those who already have the hardware inside their car.

Uber is a strong player in the self-driving space, and it has been rumored that Apple has its sights on an iCar or Apple Car. Tesla has a very good reason to establish its dominance in the self-driving car market with autopilot features in the Model X.