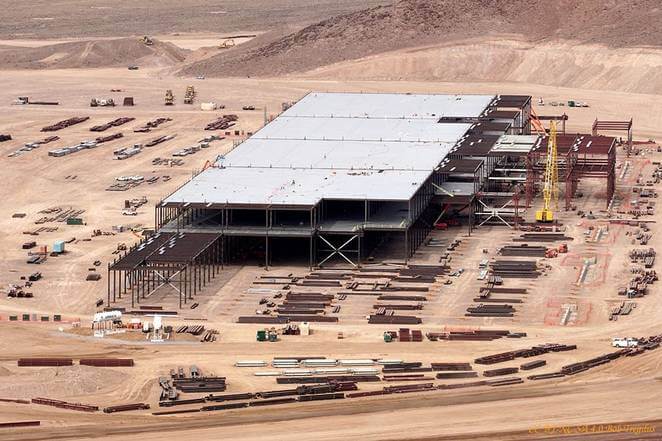 Tesla Motors Inc is in a bit of a lull at the moment. As the world waits for the firm to begin to ship the Model X, Elon Musk and his team already appear to have moved on. JB Straubel, the firm’s CTO, said a couple of weeks back that most of the Tesla team was already hard at work on the Model 3. The firm just revealed a major Gigafactory change that could impact its mass market effort.

According to an interview the Tesla execs did with Fast Company, the firm now plans to build the Gigafactory bigger than previously thought. At completion the battery plant will come in at 13,600,000 square feet. Fred Lambert over at Electrek spotted the change first. The previous measure for the floor space of the plant came in at 10,000,000 square feet.

Earlier this year Tesla Motors purchased an additional 1,200 acres of space adjacent to its Gigafactory lot. The move sparked rumors that Tesla Motors could boost the size of its power pack plant. In the words of Elon Musk: “it’s either build a whole bunch of little factories or one big factory. And a whole bunch of little factories sounds like quite a bother. Why not just have one big one and maximize your economies of scale?”

It seems that, with the plans for a 13.6M square foot plant, Elon Musk is really trying to maximize those scale efficiencies. The employee numbers, as quoted by Fast Company, have stayed steady at 6,500, as has the budget, so it’s unclear what Tesla is going to do with the extra space. What is clear, given the firm’s public statements, is why it thinks it’s necessary.

JB Straubel told Fast Company that “The biggest leverage we have on making electric vehicles more affordable for everyone is reducing the battery cost.” Tesla Motors keeps a fairly tight hold on the cost of the batteries in the Model S, but it appears that the firm has been able to push them down since the car was released.

In order to get the Model 3, Tesla Motors Inc  planned mass market car, on the road at a decent price, however, Tesla Motors is going to have to push those costs down even further.

The firm’s major goal is to lower the price of power packs, and it seems that Tesla Energy, the firm’s home power supply business, is designed to do just that. “If we can create huge demand for batteries,” Straubel told Fast Company the “virtuous cycle of reducing prices further.”

Tesla Motors isn’t just making its batteries cheaper, it’s also making them better. The firm’s new Ludicrous Mode upgrade involves the use of a silicon anode, something judged almost impossible by battery scientists for many years. Despite claims to wearing its patents on its sleeve, Tesla keeps a lot of its best tech hidden in the background.

Musk won’t be happy to stop at just one Gigafactory, even if it is the biggest building in the world by some measure. Speaking to Max Chafkin of Fast Company he said, “We’re going to need probably, like, 10 or 20 of these things, Somebody’s got to.” Musk reckons that Tesla Motors would only be able to build around 100,000 cars with the current global supply of lithium batteries.

While those with money behind Tesla Motors love to hear Elon Musk talk about the future, sometimes when he talks about the future it can get a little bit intimidating. Figuring out where the cash for 10 Gigafactories is going to come from will be the job of new CFO Jason Wheeler, but he might have to deal with some unrest on Wall Street.

Tesla Motors, as Wall Street has noticed, has been burning a whole lot of cash in recent quarters. Most of that cash appears to have gone to the firm’s long term investments. The Supercharger network and the Gigafactory are necessary to get raise demand for the Model 3 and lower prices respectively. The final cost of the Gigafactory is set to come in at around $5B, while the gigafactory’s final capital cost may keep growing for decades.

Not all of that will be borne by Tesla Motors, but a sizable chunk will. The first run of mass produced batteries from the plant are due to arrive in the first quarter of 2016, around the same time as the firm reveals the Model 3.

Tesla Motors still seems a long way off positive cash flow, and the fight between the firm’s funders and the firm’s projects is going to be a major theme in the months ahead. Tesla Motors boss Elon Musk is taking every chance he gets to assert the necessity of the humongous Gigafactory, and the charging network, to add value to the firm.

Speaking of weak demand in Europe and Asia in the firm’s recent conference call, Mr. Musk said “We’re fixing fundamental weaknesses by ensuring that we’ve got a good supercharger infrastructure, a good service center infrastructure, that any perceptions about the company are addressed. And in a lot of places, it takes time to build consumer confidence. They need to hear about Tesla a lot before they are comfortable making a significant asset purchase.”

Infrastructure to serve EVs, and infrastructure to build them better and cheaper are at the heart of the firm that Tesla Motors Inc   has become. It’s no longer about putting generic batteries on a pre-built chassis. Now Tesla Motors is an EV firm that tries to do everything, including its seats, from the ground up.

The tension between those funding Tesla Motors and the firm’s execs has yet to turn ugly in any way. The firm’s shareholders were happy to take an extra issue last Summer. That balance rests on nothing very solid, however, and it could be disturbed by market turmoil that Tesla Motors has no control over.

For the time being, however, Tesla Motors is getting even more ambitious. A 13.6M square foot Gigafactory will burn an immense hole in the firm’s already loan-filled pockets. Where the cash for the next ten or twenty will come from is anyone’s guess.