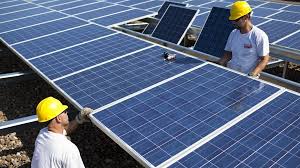 SunEdison Inc (NYSE:SUNE) CFO Brian Wuebbels said Friday that he will be stepping down from his current position. He will be looking after the solar firm’s yieldcos, including serving as president and CEO of TerraForm Power Inc (NASDAQ:TERP) and TerraForm Global.

Wall Street’s nightmare stock just saw its CFO resign from his position. SunEdison will replace him no later than April 4. Ilan Daskal, the present interim CFO of Aricient, an engineering services and software firm, will become the new CFO. Until then, Wuebbels will stay on at the solar firm with his regular duties.

Wuebbels was named the CEO of TerraForm late last year. TerraForm is a yieldco that was formed to manage SunEdison’s projects that bring in stable and long-term revenues.

He said in a statement that he is excited to focus all of his time to “drive shareholder value” at the yieldcos.

“Despite the current challenges in the yieldco space, the team and I believe there is significant value in the companies given their geographic diversity and balanced mix of contracted solar and wind power plants,” he said.

The high-level shuffling isn’t anything new. Late last year, at the time when Wuebbels became CEO of TerraForm, the CFOs of SunEdison’s two yieldcos and several board members stepped down. They were replaced by Rebecca Cranna.

Still, it may not please investors as SunEdison’s financial and legal troubles continue to mount.

There’s a reason why SunEdison is referred to as Wall Street’s nightmare stock. Year-to-date, its stock has crashed nearly 60 percent to around $2. In the last 12 months, shares have collapsed 90 percent. TerraForm’s stock performance over the last 12 months has also been weak with a 70 percent loss at a little more than $10 a share.

Of course, there are a lot more internal performance issues than just stock values.

The big headline last week was that SunEdison lost a $2.2 billion merger with Vivint Solar Inc (NYSE:VSLR). The solar energy firm walked away from the proposed deal due to the company’s failure to meet financial targets. Vivint said it will “seek all legal remedies available to it” due to the “willful breach” of the merger agreement by SunEdison.

A handful big banks, who were to fund the deal, also walked away from the deal.

The news came as it was reported that SunEdison would be conducting an internal inquiry over its finances. Reportedly, employees have been concerned about the firm’s liquidity position. The firm has started investigations and confirmed that it has yet to find any wrongdoing to date.

SunEdison has had to handle a plethora of legal troubles. It recently reached a settlement with Latin American Power. SunEdison was interested in buying this firm because it had a range of solar and wind projects in Chile and Peru.