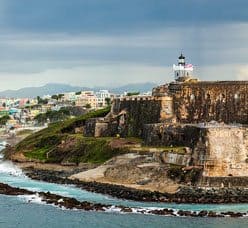 All is not well under the swaying palm trees of Puerto Rico. A financial audit for 2012—released after a four-month delay—shows the little tropical island, has a budget deficit of $1.337 billion. In addition, Puerto Rico has more than $30 billion of unfunded pension liabilities.

For up to a decade the commonwealth has been living beyond its means, running up debts it can no longer afford to pay. Local government has ballooned beyond all proportion and now accounts for a quarter of all jobs. Poverty is widespread with another quarter of Puerto Rico’s nearly four million residents receiving food stamps.

But this is not Detroit with palm trees, the new Puerto Rico government has taken painful and politically unpopular steps to cut bloated government payrolls, raise taxes, and shore up its badly underfunded pension system.

But even that may not be enough. Skeptics are doubtful the new taxes will raise enough revenue to solve the territory’s debt problems. They also worry that Puerto Rico’s fragile economy might not be able to handle a heavier tax burden.

This has led many large brokerage firms such as UBS and Raymond James to restrict access to Puerto Rico debt. UBS has told its clients this week, they must sign a document acknowledging the risks if they want to buy Puerto Rico bonds.

The move is a blow to investors who have been loading up on Puerto Rico bonds in a desperate search for yield. There are concerns municipal bond funds could be hit as well. According to data from Morningstar some 77% of municipal-bond funds hold bonds sold by Puerto Rico.

Corvus Research: – Closed-end funds: Finding cheap income in a popped muni bond bubble. – Given the current interest rate environment and uncertainty surrounding tapering of QE, caution is reasonable. Analysts at Goldman Sachs predict 10-year treasuries will hit 4% by 2016, keeping CEF portfolio value trends flat or negative until rates stabilize. For anyone who wants to trade bonds, the message is clear: stay away.

ETF Trends: – No taper means munis still priced to buy. – Fixed income markets have been hanging on the Fed’s every word. In many ways, it has transformed the municipal bond market into a rates market.

Detroit News: – City debt deal with banks up for fight. – The first big brawl in Detroit’s bankruptcy case will play out this week when the city’s lawyers try to persuade the judge that two Wall Street banks deserve to cut in front of pensioners and bondholders in the debt payment line.

NYT: – A Stealth tax subsidy for business faces new scrutiny. – Tax-exempt bonds sold by Goldman Sachs, and Barclays Capital among others come under fire and referred to as a “stealth subsidy for private enterprise”.

Learn Bonds: – Income Investing – What exactly is it? – Financial Lexicon’s introduction to income investing. The first in a series of articles about the basics of income investing, to be published over the next couple of weeks.

Bloomberg: – Demand strong as ever as institutions bid for bond sales. – Demand for new Treasuries from their biggest owners is proving impervious to rising yields and the retreat of Wall Street dealers.

FT: – Taper delay could push stocks and bonds higher. – For investors, it would seem nothing beats having the Federal Reserve in your corner. That was the message from markets on Wednesday when the central bank went against expectations in deciding that the timing was not quite right for reducing its hefty bond buying, known as the taper.

Investment News: – Will Bernanke’s head fake spark bond rally? – The Federal Reserve Board’s surprising change of heart about reducing the pace of the five-year-long quantitative-easing program is seen by some advisers as creating new investment opportunities.

Morningstar: – When the bond market was broken. – Morningstar’s Dave Sekera describes the market breakdown after Lehman, the state of the bond market now, and investors’ heightened attention to systemic risk today.

Bloomberg: – Bill Gross’s I-told-you-so moment added boost in Mexico. – Bill Gross’s prediction that the Federal Reserve would unwind its unprecedented stimulus slowly at a time when bond traders were bracing for a quicker reduction is paying some of the biggest dividends south of the border.

FT Beyondbrics:  – EM bonds: Get your party hats back on. – The party is back – thanks to Ben. Over the past two days, borrowers from Colombia to Sri Lanka have rushed to take advantage of the window of opportunity created by the US Federal Reserve’s decision to keep the QE punchbowl flowing, raising at least $5.3bn on the international bond markets.

FT: – U.S. convertible bonds slow unexpectedly. – The pace of convertible bond issuance in the US unexpectedly slowed through the summer, defying investor expectations that a rapid number of new deals would come to market as interest rates moved higher.

Telegraph: – Bond funds that will weather the storm. – When central banks stop printing money the bond market is expected to fall. Which bond funds are safest?

FT Alphaville: – Rotation watch, swings and bond routs. – Remember all that talk of the great rotation at the start of the year? Before bond yields and stock markets really started to move there was much discussion of whether investors would actually sell bonds in favour of equities, or just allocate new money in that direction.

IndexUniverse: – Mixed bond flows tell bullish ETF tale. – Investors have yanked $24 billion from bond mutual funds in the first two weeks of September, putting September already on track to being the fourth consecutive month of sizable redemptions from the segment. But they have also poured some $3 billion into bond ETFs, which seem to be continuing to chip away at mutual funds’ dominance by virtue of their lower costs, according to IndexUnvierse and TrimTabs Investment Research data.

muni market participants worst nightmare would be a rallying Treasury market and a Friday with positive fund flows as supply is tumbleweed.