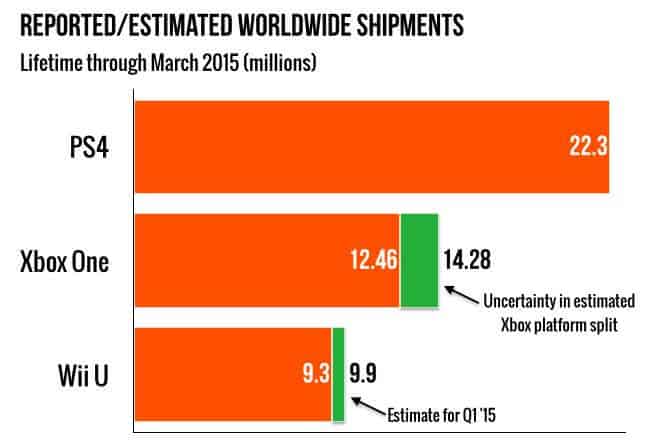 Microsoft Corporation (NASDAQ: MSFT) may not be as far out of the home console race as previously thought. A new chart showing shipments of the company’s consoles shows that the company’s Xbox One may be catching up to the PS4 from Sony Corp. (NYSE: SNE). In a console war that Nintendo has allowed to come down to PS4 VS Xbox One the shift is significant.

Xbox One sales still lag well behind those of the PS4, and Microsoft may never manage to catch up to Sony in terms of total sales. It may be possible however to put the Xbox One PS4 battle on more even footing as the battle between the Xbox 360 and Ps3 settled into after the initial Sony sales slump.

The absolute gap between sales of the PS4 and Xbox One appears to be tightening, which is a positive trend for fans of gaming as a whole and fans of the Microsoft Xbox One in particular. 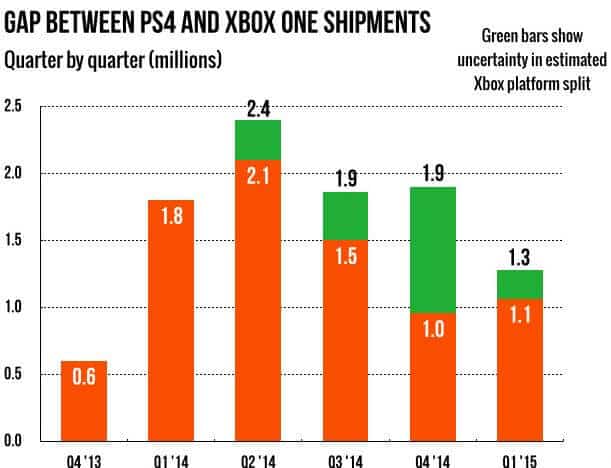 According to Ars Technica author Kyle Orland who recently wrote about the PS4 VS Xbox One sales contest, “Sony’s system continues to outsell the Xbox One by a healthy margin on a worldwide basis.” That consistent outpacing comes despite some sales momentum appearing toward the close of last year.

According to Orland the gap between the consoles hit 1.2 million in the first quarter of 2015. That’s far below the 1.8 million Ps4 to Xbox One sales gap that existed in the same quarter of 2014. With the Ps4 VS Xbox One install base ratio heading toward 2:1, it’s important for that gap to close going forward. A substantial weighting in favor of the Sony console would be bad for Xbox One owners, but also for the

Gamers want a competitive Xbox One VS Ps4 battle

There’s no point in a one-sided console war, an conscientious gamers will realize that two big companies working against each other to impress them as a group may be more beneficial in the medium term. While short term PS4 VS Xbox One sales wins may be a good psychological boost for Sony fans, their repetition could harm fans in the long term.

Healthy competition between the Playstation 4 and the Xbox One is a necessary part of the console war, and right now it seems as if Microsoft might drop out of the race entirely. The surge that kept fans of the company going at the end of 2014 is over, and the rumors that CEO Satya Nadella is looking to axe the project are always raising their head.

The Xbox One may be a failure for Microsoft, but the least the company can do is work on the console so that it’s not a failure for the user. A tighter Xbox One VS PS4 sales spread is great incentive to make that happen.

Micheal Pachter of Wedbush Securities still says that Microsoft is looking to shift its gaming focus away from the Xbox One VS PS4 battle and onto the PC and mobile markets.