European biggest airlines Deutsche Lufthansa and Air France agreed to get government support to survive in a challenging environment that has forced them to ground the majority of aircraft, leaving them to burn millions of euros in staff and maintenance costs.

Air France agreed to a €7bn bailout from the French government. The bailout package, which is also approved by the European Commission on Monday, includes €4bn in state-backed bank loans and €3bn of direct loans. The conditions attached to the bailout package includes cutting some domestic routes and reduce emissions.

Lufthansa, which warned that it is close to bankruptcy and bleeding millions of euros every hour, is seeking to get a €9bn bailout package from Germany, Austria, and Switzerland to cover its operational costs.

This comes after, all three of the biggest US passenger airlines last month agreed to get the bailout package from the US government with conditions that include no employee layoff and equity stakes. American Airlines (NASDAQ: AAL) had received $5.8bn while Delta Air Lines (NYSE: DAL) received $5.4bn and United Airlines (NASDAQ: UAL) got $5bn share from the bailout package.

Lufthansa said on Sunday that it is close to a deal with the German government on state aid. The company is expecting to receive €1.2bn in loan from Swiss authorities, while it has also been anticipating getting a portion of financing from the Austrian government.

However, Germany is likely to demand a 25.1% stake in the Lufthansa airline against the bailout package, according to weekly paper Der Spiegel. The governments are also planning to impose restrictions on dividend payments, executive salaries, and employee layoffs.

“Taxpayers can count on us not to conduct these talks naively,” German Finance Minister Olaf Scholz said.

Lufthansa carried fewer than 3,000 passengers daily in April, reflecting a more than 90% drop from pre-pandemic average passengers of around 350,000 a day. It has grounded close to 700 of its 760 aircraft at airports. 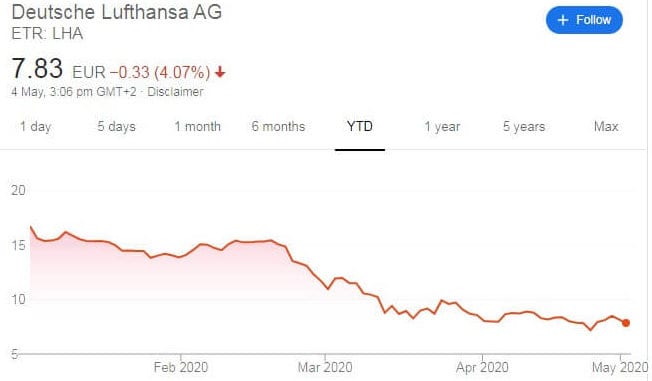 Both European airline companies lost half of their stock trading value since the beginning of this year.

If you plan to short airline stocks, you can check out our featured stock brokers here. You can also use stock trading apps to trade airline stock.