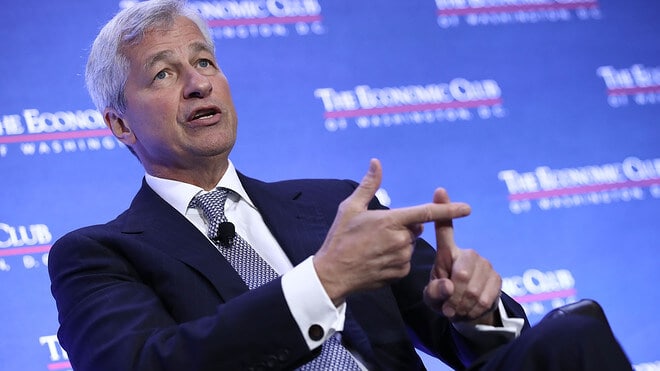 JP Morgan shares are up nearly 2% at $104 per share during today’s pre-market stock trading activity following the firm’s release of its results for the third quarter of 2020, with the American bank beating both earnings and revenue estimates for the three-month period.

The bank headed by Jamie Dimon (pictured) reported this morning that it brought $29.1bn in revenues during the third quarter of the year, a number that fell only $200 million shy of what the firm generated a year ago, although higher than the $28.21bn analysts were forecasting for the quarter.

The firm’s consumer and community banking segment was the most battered during the quarter, with revenues dropping 9% as a result of the economic fallout caused by the pandemic in the United States, with consumer and business banking being the most affected sub-segment.

That said, home lending revenues boomed during the quarter, growing 17% as a result of higher mortgage application volumes influenced by the current low interest rate environment.

Moreover, JP Morgan managed to grow its investment banking revenues by 21% during the three-month period, a situation that helped offset the deceleration in traditional banking services revenues, mostly fueled by the positive performance of the firm’s fixed-income trading desk during the quarter.

Perhaps the most interesting number in today’s quarterly report is the bank’s provision for loan losses, with JP Morgan taking only $611 million in additional reserves while analysts were estimating as much as $2.88bn in provisions for the quarter amid the unprecedented crisis resulting from the virus outbreak.

These lower reserves represent a change in the way the bank is dealing with the crisis, as JP Morgan apparently believes its current build-up is large enough to sustain a potential wave of defaults resulting from the economic deceleration caused by the virus in the short run.

In fact, the bank actually reduced its reserves by $600 million during the quarter once net charge-offs are deducted from the total reserves the bank provisioned during the period.

A reduction in reserves is perhaps signaling that JP Morgan is foretelling that the worst of the pandemic – in economic terms – is over and the bank’s updated unemployment rate and GDP growth forecasts have been adjusted according to this view.

The American bank is now seeing an unemployment rate of 7.3% by the end of next year and a 2.4% slump in the US gross domestic product by the fourth quarter of 2021 – in both cases, these numbers represent a slightly more optimistic view about the future of the US economy.

Meanwhile, JP Morgan may feel its current reserves are large enough to sustain any upcoming defaults, with charge-offs still sitting at low levels compared to other recessionary periods such as the 2007-2008 financial crisis.

What’s next for JP Morgan shares?

Today’s price action in JP Morgan shares still falls short of breaking the sideways consolidation pattern shown in the chart above, although the bank’s optimistic outlook could generate enough positive momentum for that to accomplished.

The current backdrop remains fairly unfavorable for banks to some extent, but JP Morgan’s ability to maintain its revenues and earnings during the downturn by relying on other streams to cushion the blow to its consumer banking segment is perhaps the most attractive feature of this investment at the moment.

A move above that consolidation range could be signaling that investors are ready to lift the shares to its June highs, with the MACD already sending a buy signal while stepping into positive territory.