The U.S. Bond Market May Be Much Different Than You Think It Is 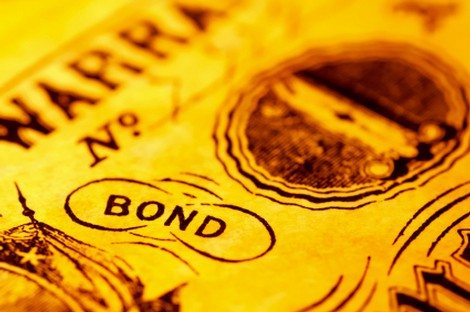 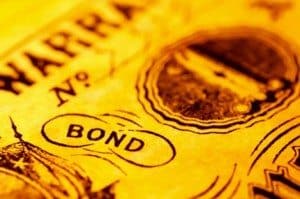 In doing research for an article, I had to gather better data regarding the nature of the U.S. bond market. As I was acquiring the data, I realized I should make it more user-friendly and share it. The U.S. bond market may be much different than you think it is. When you get your information piecemeal, and you never consume a good overview, things tend to seem much different than they actually are. Specifically, in this article, I will focus on amounts outstanding by debt type, versus trading volumes by debt type, debt holders by debt type, and other aspects.

The Bond Market vs. the Stock Market

Below is a chart showing the amount of U.S. bond market debt versus the U.S. stock market capitalization for domestic companies. The figures on the chart are adjusted by nominal GDP, so that all figures are in end-of-2012 nominal-GDP dollars. In adjusted by nominal GDP, we get two effects. (1) We adjust for growth of the economy. (2) We adjust for inflation. The bond and stock markets, like many other markets, have a tendency to grow as the economy grows. We want to remove this influence to get better year-to-year comparisons. Removing the influence of inflation also gives us better year-to-year comparisons. If we do not remove the influence of inflation, the bond and stock markets appear to have grown more over the years than they actually did.

The Bond Market by Debt Type

The below chart shows the U.S. bond market size by debt type and covers year-end 1980 thru 2012. The figures on this chart are also adjusted by nominal GDP. Notice that the Treasuries market increased from about $5 trillion to $11 trillion from the end of 2007 thru 2012. The $11 trillion is not the entire U.S. national debt. It is only the public debt. I defined public debt in last week’s article, “How Bad Is the U.S. Debt Situation?” As you could see in last week’s article, the public debt is projected to shrink as a percentage of GDP beginning in U.S. fiscal year 2015 and, then, beginning growing again as a percentage of GDP in U.S. fiscal year 2019.

The SIFMA (Securities Industry and Financial Markets Association) data had a note regarding the municipal numbers. The note said: “Municipal securities restated from 2004 onward and revised upward by about $840 billion.” The increase seemed to all be within the individual bond holder category. SIFMA gathers data from different sources. The jump in municipal market size in 2004 seems to be due to better data versus an actual increase in market size. The fall in money market (including CDs) market size from 1983 to 1984 may also be due to better or worse data, as I am unaware of any event that would have led to such a relatively sudden large fall in market size.

As you can see below, intermediate-term instruments dominate the Treasuries space. Inflation-indexed notes and bonds, such as Treasury Inflation-Protected Securities (TIPS), are only about 2% of the total U.S. bond market.

As mentioned above, the federal agency market shrunk 41% on a GDP-adjusted basis from the end of 2008 thru 2012. Not surprisingly, this was housing-related. Federal Home Loan Banks, Fannie Mae, and Freddie Mac debt all shrunk considerably during this period. Farm Credit, Farmer Mac, and TVA (Tennessee Valley Authority) debt all grew during this period.

Per the SIFMA Q1 2013 Municipal Bond Credit Report: “Despite the recent entry of a new insurer (Build America Mutual), currently only a quarter of all (non-prerefunded/derivative) municipal deals outstanding are insured, compared to a third from only two (actually 1 ¾) years ago…” Revenue bond debt dwarfs general obligation bond debt. Revenue bonds are supported by the revenue from a specific project, such as a toll bridge or road, a stadium, or a water purification plant. General obligation (GO) bonds are supported by taxes. Five percent of municipal bond debt is prerefunded.

U.S. government debt is rated AAA/Aaa by Fitch/Moody’s and AA+ by S&P. Federal agency debt tends to receive favorable interest rates based upon the implied or actual backing of the agencies by the highly-rated federal government. Ratings vary a lot for municipal bonds; but the vast majority of municipal bonds are investment-grade (AAA/Aaa-to-BBB/Baa). Non-rated bonds tend to be the same quality as high yield (BB/Ba-and-below) bonds. The data in the following chart reflects the lowest S&P, Moody’s, or Fitch rating for each bond.

As mentioned above, the asset-backed market shrunk 49% on a GDP-adjusted basis from the end of 2007 thru 2012. All major asset-backed debt categories shrunk strongly in market size, except Student Loans, which grew slightly in non-GDP-adjusted terms. Also, it should be noted that the Automobile and Other category market sizes have been recovering recently from their strong fall. CDOs are collateralized debt obligations.

Below is a condensed version of much of the above information. It is, from an amount-outstanding-by-debt-type perspective, the U.S. bond market in a nutshell. 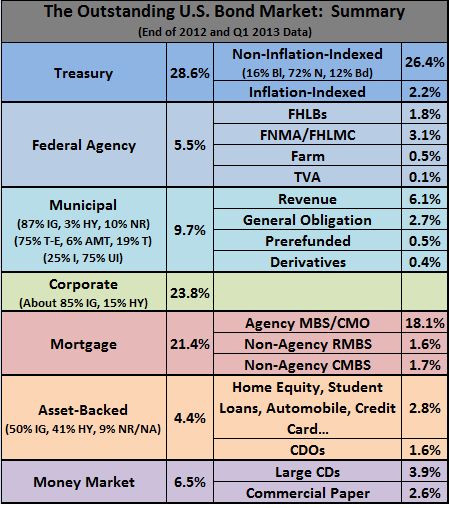 For more investment ideas and resources, see our featured stockbrokers and mobile trading apps. Alternatively, to buy shares in the UK, see our featured Stock brokers or Spreadbetting companies for more details.