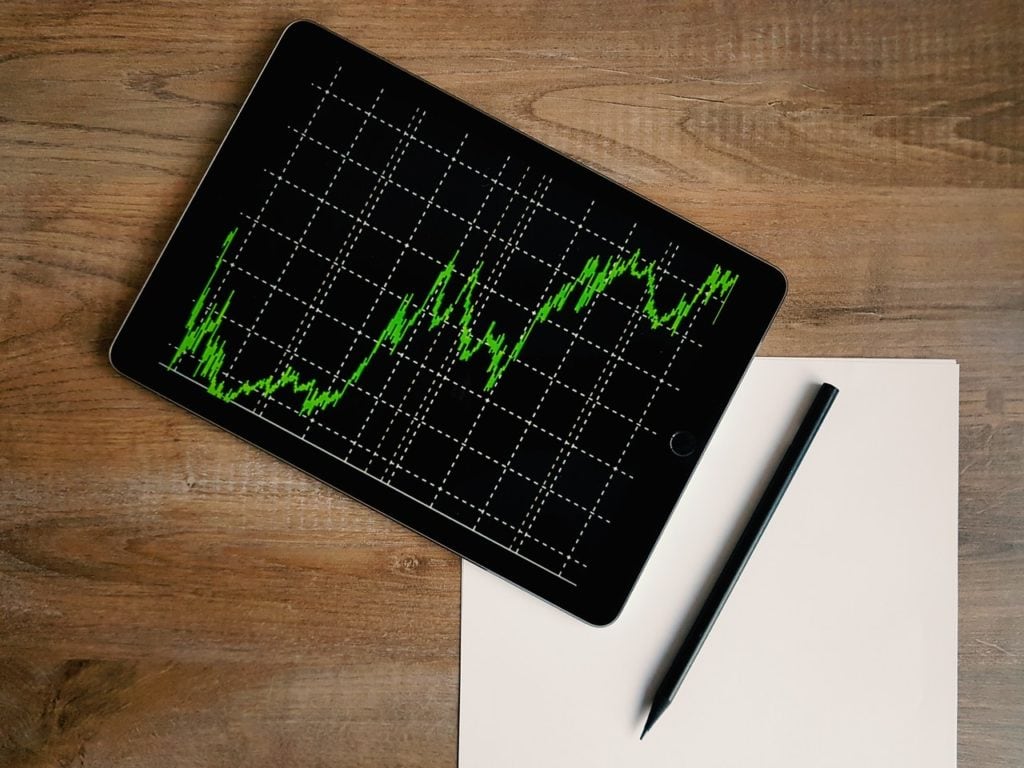 Renewable energy stocks have been on a fire this year. Yesterday, FuelCell Energy (FCEL) stock soared over 54% and opened higher today also.

To be sure, the rise is not limited to FuelCell Energy only. Tesla soared 6.5% yesterday to a new record high. Tesla stock is up sharply this month after the news that it would be included in the S&P 500.

Li Auto and XPeng Auto, that listed on the US markets this year only, also gained 14.5% and 33% respectively yesterday. DPW Holdings’ stock also more than tripled yesterday after one of its subsidiaries announced plans to install electric vehicle charging points at national fast foods restaurants. DPW Holdings was among the biggest gainers yesterday and surpassed even the massive gains in FuelCell Energy stock.

While there is little denying that the future of the automotive industry is would be renewable and alternative fuel, the sharp rise in stocks like FuelCell smells of a bubble. 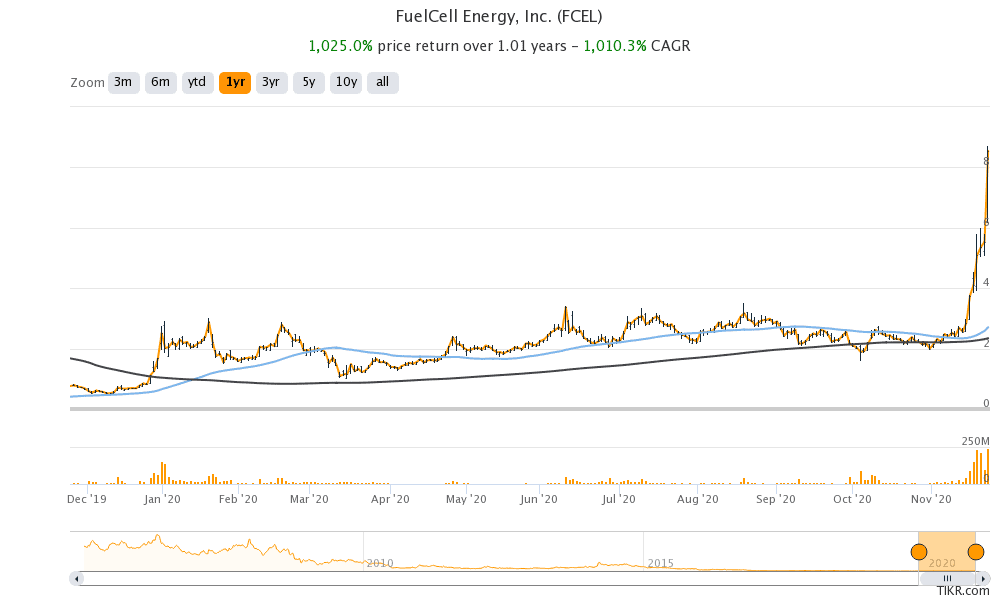 What does FuelCell Energy do?

Last month, it completed a share issuance to raise capital. The stock has gained over 325% so far in November. JPMorgan Chase analyst Paul Coster, who had an overweight rating on the stock, recently downgraded it after the sharp rally.

Why is FuelCell Energy stock going up?

To be sure, there was no specific news yesterday related to FuelCell Energy or far that matter about any other major electric vehicle or green energy stock. The rally is part of the broader uptrend that we’ve seen in green energy stocks after Joe Biden’s election.

Here it is worth noting that while automotive companies like Toyota Motors and Hyundai are investing in hydrogen fuel cell technology, many are not convinced about the technology’s future. Tesla’s CEO Elon Musk has lashed out against fuel cell technology multiple times.

All said the future of the automotive industry would depend on which technology—electric vehicles or fuel cells—can come up with a cost-efficient and more reliable technology. 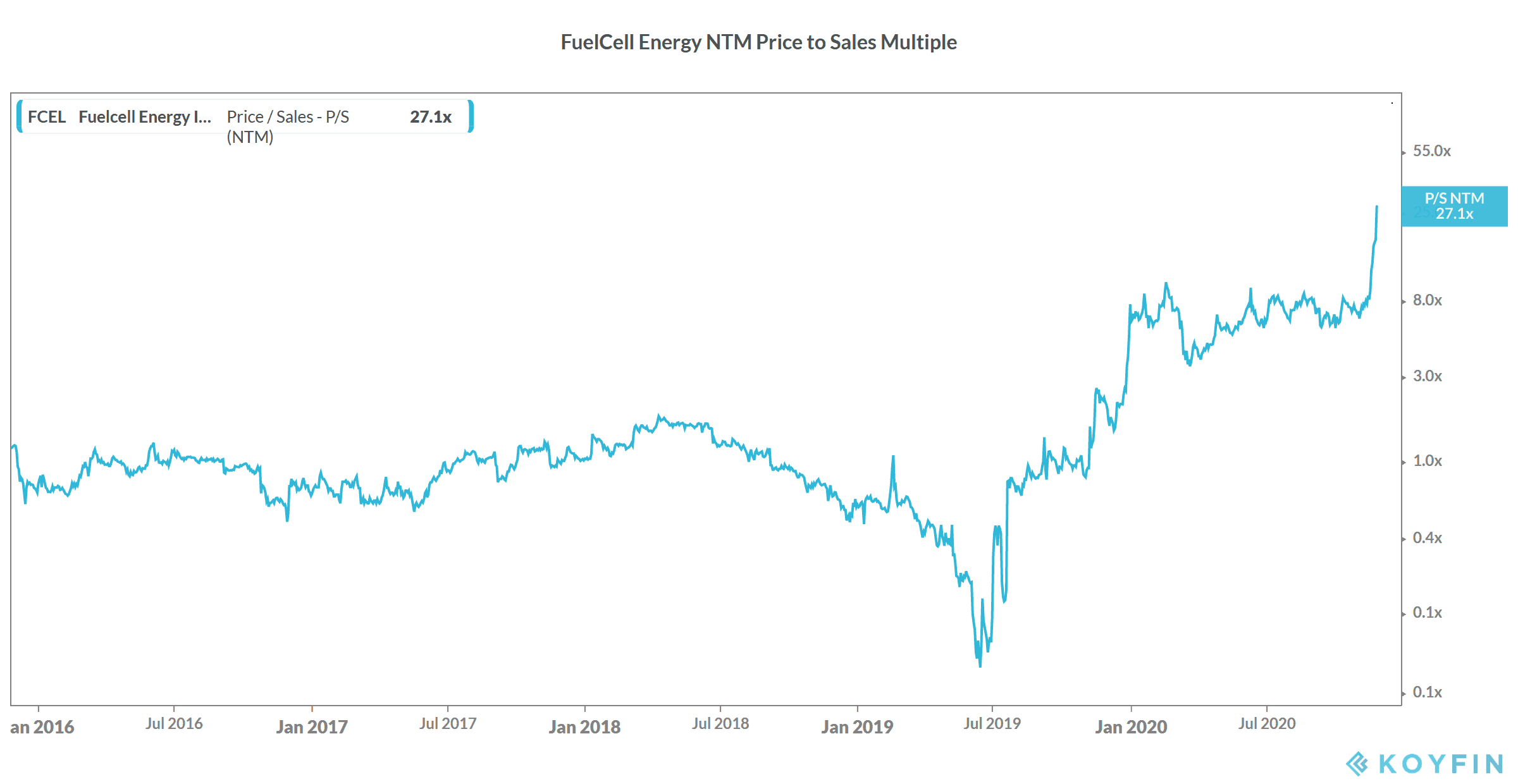 There is a euphoria towards green energy stocks like FuelCell Energy that has taken valuations to astronomical levels. However, if Biden goes ahead with his plans of boosting renewable energy generation in the US, companies like FuelCell could benefit.

FuelCell Energy stock trades at an NTM (next-12 months) price to sales multiple of 27.1x which is not cheap by any standards. However, the stocks in the green economy have seen a massive rerating this year led by Tesla, whose market capitalization now exceeds the combined market capitalization of Toyota Motors, Volkswagen, Ford, and General Motors.

How to buy FuelCell Energy stock?

After the sharp rise in Tesla’s stock price, its CEO Elon Musk is now the second richest person globally surpassing the net worth of Microsoft’s founder Bill Gates.

You can trade in FuelCell stock through any of the reputed online stockbrokers. Alternatively, if you wish to trade derivatives, we also have reviewed a list of derivative brokers you can consider.