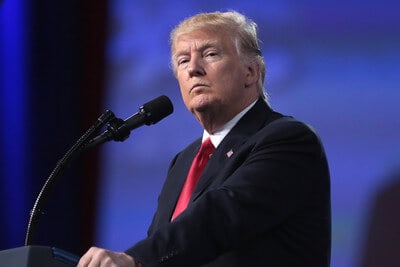 The Trump administration has threatened to slap 100 per cent import taxes on $2.4bn worth of French goods, such as champagne, in retaliation for its new digital services tax.

The US says the French tax penalises firms like Google, Amazon and Facebook, and threatens to hit back with tariffs of on a range of the country’s products including cheese, cosmetics and handbags.

The charge is based on digital activity, not just where firms have their headquarters, and is designed to prevent tech firms from dodging taxes. The charge will go into effect retroactively from early 2019 and is expected to raise about €400m this year.

French minister Bruno Le Maire called the US threat “unacceptable”, adding: “In case of new American sanctions, the European Union would be ready to riposte.”

US Trade Representative (USTR) Robert Lighthizer said on Monday the potential tariffs on French goods were intended to deter other countries from taking similar steps.

The FSTE 100 in London dipped by one per cent to 7,213.8 in early Tuesday afternoon trading, in New York the Dow Jones Industrial Average closed down one per cent at 27,783 on Monday.

Lighthizer said America’s proposals “sends a clear signal that the United States will take action against digital tax regimes that discriminate or otherwise impose undue burdens on US companies”.

He added: “The USTR is focused on countering the growing protectionism of EU member states, which unfairly targets US companies, whether through digital services taxes or other efforts that target leading US digital services companies.”

The USTR warned that other countries that have introduced digital services taxes, including Italy, Austria and Turkey, could face similar sanctions.

Washington also said it would restore tariffs on metals from Argentina and Brazil to punish them for what it calls currency manipulation.

Some critics argue the move by President Donald Trump is designed to appeal to voters in the long fight for the White House next year.

Oanda Europe senior market analyst Craig Erlam said much of the President’s moves on tariffs are about “prioritising his election next year”.