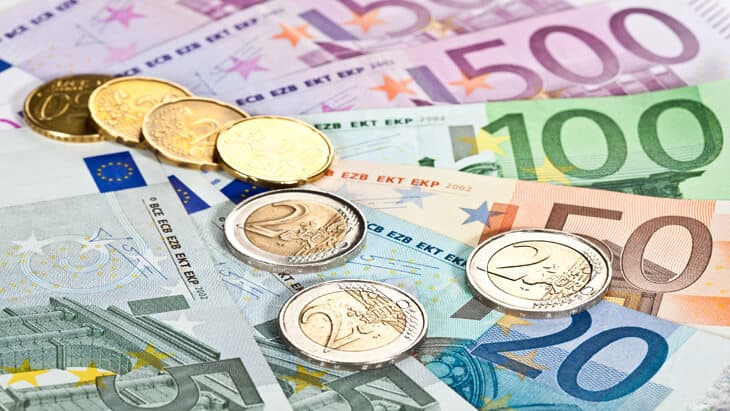 The euro climbed to a three-month high on Friday after the European Central Bank boosted its stimulus programme, which also buoyed European stocks.

The euro rose to $1.1380 against a weakening dollar, its highest level since 10 March, and was on course for a weekly jump of 2.5% and a ninth straight day of trading gains.

This would be the euro’s longest series of rises on record since October 2004, while the dollar index is on course for its third consecutive week of losses at 96.611, staying near its lowest in nearly three months.

The central bank, led by President Christine Lagarde, said it would boost its emergency bond-buying programme by €600bn (£546bn) to €1.35tn, more than most economists expected.

The programme, introduced in March, will run until June 2021, six months longer than planned.

The move is designed to keep banks lending into the economy after data showed last month that the 19-nation eurozone economy shrank by 3.8% quarter on quarter in the first three months of the year, the worst performance since before the euro was created in the late 1990s.

Markets cheered the move hoping that continued government bailout packages and economies restarting across Europe and in the US would only lead to short recession in the second half of the year as a result of the coronavirus pandemic.

“The euro will keep rallying and move towards $1.20,” Peter Chatwell, head of rates at Mizuho Bank, said, adding that the ECB had “dramatically” supported the euro by reducing tail risk.

“The rotation out of US dollar generally continued unabated overnight,” added Jeffrey Halley, an analyst at OANDA.

However, other currency analysts were cautious about how far the euro would continue to rise among its peers.

Some pointed to late March, when the euro recovered from its pandemic lows to rally by around 5% in just over a week, but this was followed by a 3.5% slide in a matter of days.

ABN Amro’s Georgette Boele says it is premature to expect a “continued strong rally” in the currency as “difficult discussions” are ahead on the European Commission’s stimulus program.

However, the mood among most investors and currency traders seemed optimistic going into the weekend.

“You’ve got the creeping optimism of the global economy being past the worst and thinking that things are going to be up from here,” said Commonwealth Bank of Australia analyst Joe Capurso.

The euro rose as much as 1.3% to 123.92 yen, the highest since May 2019 and notched its longest such streak of daily advances in over a decade. Against the Swiss franc the euro hit a fresh five-month high 1.0864.