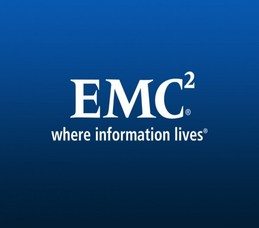 EMC Corp. recently issued new bonds, announced a share buyback and a dividend. The new EMC bonds due in 2023 yield  3.64%, larger blocks have gone for as low as $96.99 recently, with a 3.74% yield. Note bond prices have risen and fallen dramatically in the past 6 months.

We intend to use the net proceeds from this offering for repayment of all of our outstanding 1.75% convertible senior notes due 2013 (the “existing convertible notes”), which will mature on December 1, 2013, and for general corporate purposes

Now let’s take a look at how the new EMC bonds stack up:

*The EMC bonds have a minimum denomination of 2 bonds.

Bond prices took a hit after the Fed’s recent comments on the status of quantitative easing efforts.

The Committee will closely monitor incoming information on economic and financial developments in coming months. The Committee will continue its purchases of Treasury and agency mortgage-backed securities, and employ its other policy tools as appropriate, until the outlook for the labor market has improved substantially in a context of price stability. The Committee is prepared to increase or reduce the pace of its purchases to maintain appropriate policy accommodation as the outlook for the labor market or inflation changes…

To support continued progress toward maximum employment and price stability, the Committee expects that a highly accommodative stance of monetary policy will remain appropriate for a considerable time after the asset purchase program ends and the economic recovery strengthens…

Though the content of the message seems encouraging, investors only heard one thing, QE will taper off.

Some believe the 10-year treasury could leap back to 5% after quantitative easing ends. Lower rated, investment grade corporate bonds, due in 10 years could yield upwards of 7% according to some.

EMC’s bond decision may have been influenced by the same perfect storm that influenced Apple. The overall market did well, while their stocks lagged, and low interest rates were very appealing to issuers. While Apple’s 30-year bonds dropped around 10% since they were issued, EMC’s 10-year bonds are still trading near par. EMC issued $5.5B in new bonds, whereas Apple issued $17B. Clearly one of the top reasons for these decisions is very low interest rates.

Apple issued 30-year bonds, EMC issued bonds due in 2018, 2020 and 2023. Therefore EMC bond investors need to consider smaller periods of time. However, the only lot of EMC bonds I would consider currently are the 10-year bonds, because the shorter term bonds yield less than 3%.

Let’s look at EMC’s business for a moment.

Whereas oil companies worry about spills, tech. companies like EMC are concerned with hacking. EMC spent $2B on RSA Security in 2006, RSA SecurID generates a unique 6 digit password every minute that corresponds to a token key; even this high tech protection system was hacked in early 2011, which illustrates the complexity of big data security.

What Is Big Data?

In order to understand one part of EMC’s business I looked up big data, one of the top results is a definition from IBM:

“What Is Big Data?: Every day, we create 2.5 quintillion bytes of data — so much that 90% of the data in the world today has been created in the last two years alone.”

Let’s take a look at a few of the competitors, though IBM is in information technology it directly competes with EMC’s big data services.

Pivotal One is a complete, next generation Enterprise Platform-as-a-Service that makes it possible, for the first time, for the employees of the enterprise to rapidly create consumer-grade applications.

EMC acquired Seattle based Isilon in 2010 for $2.2B. EMC’s Isilon is a scale-out network-attached storage (NAS) system that the company boasts is one of the fastest on the market: 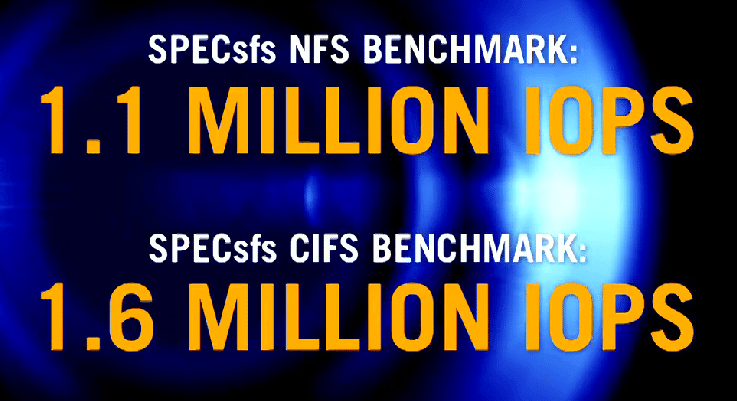 IOPS are input/output operations per second. Check out this PDF about IOPS from EMC subsidiary VMware (VMW) for more in depth information on this subject.

An EMC employee, Stefan Radtke has written about the Isilon / IBM SONAS comparison.

“SONAS has a fixed protection level based on RAID6 for all data. It uses arrays with 8 data and two parity bits without any spare disk. As a result, SONAS would for example not survive a two node failure (unless all data is mirrored)”

No matter the nuances of the technology, bond investors can gain insight by looking into the actual products. Their implications are vast, and you can be assured the technology will look a lot different in a couple years, however it will likely evolve from the current products.

Some bond investors look  to a company’s EBITDA or cash flow to determine whether to buy and sell. I prefer to look at net income and available cash to debt, these figures can literally change overnight. 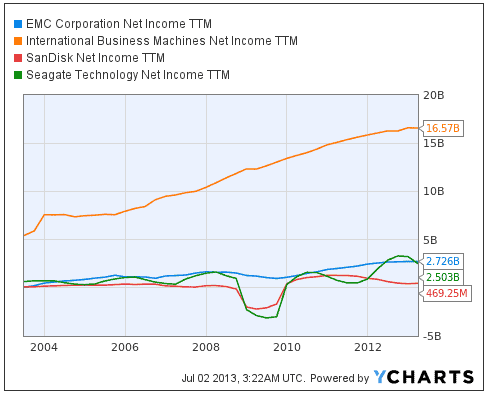 Note the above net income data is based on TTM, or trailing twelve months. Keep in mind, you can get a more detailed picture of the net income by searching “net income quarterly” instead of “net income TTM.” 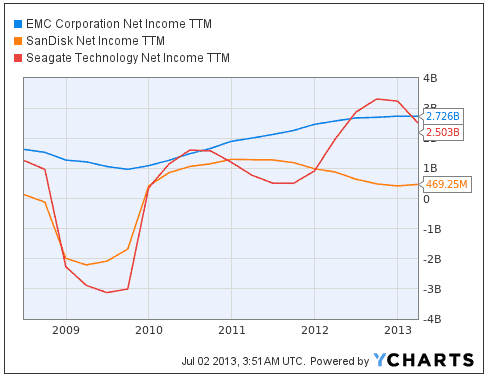 EMC appears to edge out both SanDisk and Seagate currently, though investors need to consider how EMC will perform through the maturity of their new 2023 bonds.

Tech. is fast paced, though EMC appears to be profitable, now let’s look at the stock.

EMC’s Timing and the Arguments Against Bonds

EMC Corporation (NYSE:EMC) today announced an  expanded capital allocation strategy that reflects the company’s confidence in its long-term business prospects and ability to generate consistent revenue and non-GAAP EPS growth while expanding its commitment to return capital to shareholders.

As part of the strategy, EMC’s Board of Directors has increased its authorization to repurchase EMC common stock from $1 billion in 2013 to $6 billion over the three-year period ending December 31, 2015…

Additionally, the EMC Board has approved the initiation of a quarterly cash dividend to EMC shareholders. The first quarterly dividend of $0.10 per share of common stock will be paid on July 23, 2013 to shareholders of record as of the close of business on July 1, 2013.

One of the current arguments that surrounds bonds is their potential (or lack thereof) compared to stocks. I’ve heard investors claim they think of certain stocks as bonds. The fact is bonds are bonds, stocks are stocks, and there are reasons to consider investing in, or not investing in either.

I like to look at the company, there are some companies whose stock I like and bonds I do not like and vice versa. Though I like to find companies where I’d invest in both their stock and bonds.

Another argument against bonds is the current low interest rate environment and negative impact of inflation. This is where allocation becomes very important; in late June bond prices dropped sharply. Many believe they will drop much further, so it is important to prepare for this possibility.

This is to say whether you are a large or small investor, hopefully you realize the stock market is currently high and interest rates are low. The EMC bonds are currently rated A1, the 10-year daily treasury yield curve is 2.73%, the EMC 2023 bonds yield 3.64%, though you can not know for certain what direction their credit rating will go.

If you want 5 EMC bonds you might, or some exposure to the bonds here are three ways to consider:

If the EMC 2023 bonds’ yield went to 5%, the investor who pays $2,000 today could see their original investment lose $300 or so. Ultimately by 2023 the bonds should mature at par, however $2,000 will likely not be worth what it is today because of inflation. So investors could consider how many bonds they feel comfortable buying, knowing they could go down $150 a bond (or more) as rates go up.

For some investors, perhaps many, the answer is zero bonds, however there are some investors who like the company, have exposure to the stock, and have profit they are looking to allocate to fixed income. Additionally, though the 10- treasury rate has soared to 2.7% (and the 7-year to 2.19%) it is anyone’s guess as to whether it would go to a level whereby A1 rated bonds due in 2023 would yield 5%.

There is no definitive way to time the market, additionally it is possible that a company could default at some point for unforeseen reasons. Currently the 3.375% coupon on the EMC 2023 is much greater than the 1.875% coupon on the higher rated 2022 IBM bonds, however much lower than the 5.45% coupon on the GE Capital Internotes, of course the GE notes are priced around $108 now and GE has a whopping $397B in debt and $89B cash — in addition to rumors swirling of GE Capital one day spinning off.

For now EMC, Ebay and Amazon’s 10-year bonds are on my watch list:

Take a look at their net income over the last ten years; contemplate where you think they will go in the next ten years: 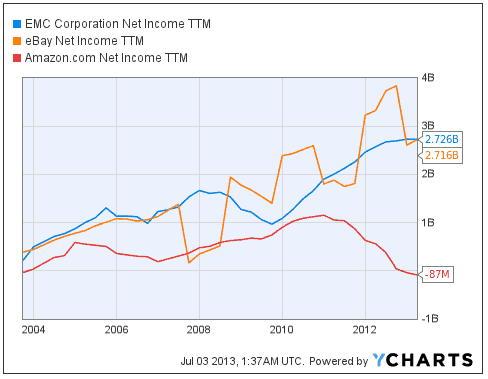 Important factors to consider are the overall direction of the market and allocation to stocks versus bonds within a given portfolio. Also simply whether $1,000 right now is worth $33.75 a year fixed income from EMC through 2023.

If you have any thoughts on EMC’s new bonds please leave a comment below.

Disclaimer: This article is not a recommendation to buy or sell. Please consult a financial adviser to determine proper allocations, if any to individual bonds. I am considering the EMC, Amazon and Ebay bonds, I am long Goldman Sachs monthly coupon bonds, long-term IBM & MSFT bonds. Long MSFT, IBM & EMC stock.