BlackBerry Ltd ‘s run as a leader in the smartphone world is over. The firm is now focusing on making automobiles smarter. At this year’s CES (Consumer Electronics Show), Blackberry will take the wraps off its latest-gen in-car operating system – QNX SDP 7.0. This OS will take security and reliability to another level, claims BlackBerry, which will also debut an autonomous Lincoln concept car.

BlackBerry is aiming to make it big in the ‘in-car connectivity’ and ‘infotainment’ industry. The firm is making good progress as its QNX OS has already made a prominent place for itself. Many major carmakers including Aston Martin, Porsche, BMW, GM, VW and Ford are already using the operating system in their instrument clusters, entertainment displays and head units.

Senior VP and head of BlackBerry QNX, John Wall, said, “With the push toward connected and autonomous vehicles, the electronic architecture of cars is evolving — from a multitude of smaller processors each executing a dedicated function, to a set of high performance domain controllers, powered by 64-bit processors and graphical processing units.”

When it comes to warding off cyber attacks, the most robust system available is QNX SDP 7.0 as it meets the toughest current security criteria, the Canadian firm claims.

Along with software, BlackBerry Ltd is using CES to show off concepts and unveil a specially developed Jaguar XJ with a digital cockpit, active noise control and HD in-car communication during the event. The firm will demo an autonomous Lincoln MKZ concept car as well that drives itself with the help of QNX.

To push its presence further in the segment, BlackBerry and Renesas Electronics America have announced a new collaboration under which they will develop an automotive-grade technology platform for autonomous driving.

The two firms put their joint autonomous driving technology platform in motion on a test track at CES 2017. Under the deal, a 2017 Lincoln MKZ powered by BlackBerry QNX’s Neutrino Realtime OS and QNX Platform for ADAS, will run on the Renesas R-Car H3 system-on-a-chip (SOC) platform.

It is clear from the description that the car is packed full of technology from BlackBerry QNX and Renesas. It seems, the project is meant to showcase how all that technology can work together to create autonomous drive solutions. 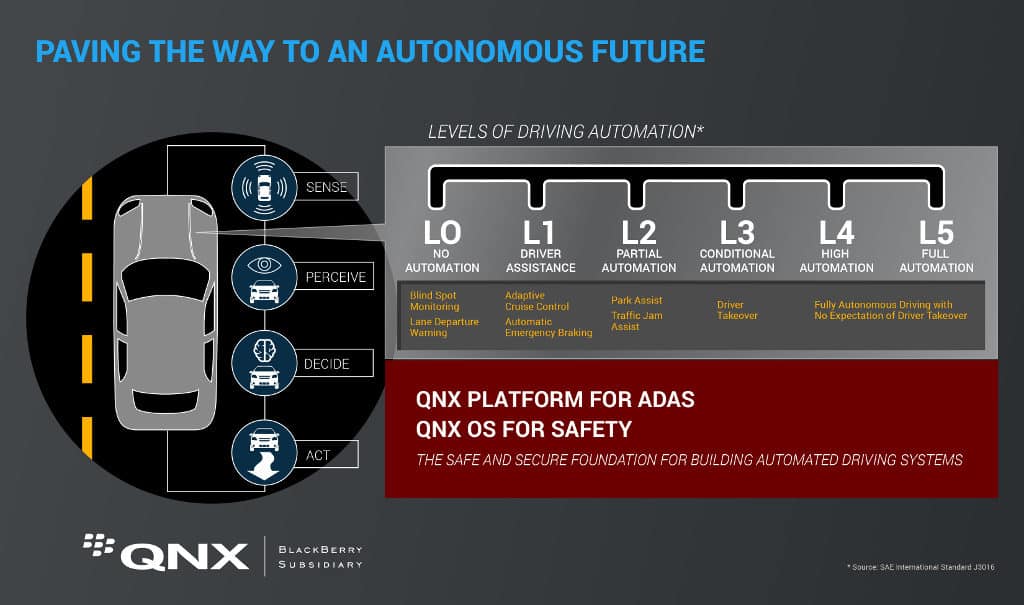 HopeS to make it big in Autonomous driving

Last month, BlackBerry Ltd opened its first Innovation Centre for Connected and Autonomous Vehicles. The mission of the center based in Ottawa is to accelerate the development of BlackBerry’s own vehicular tech and partnering with others.

Speaking about the new facility, CEO John Chen said, “Autonomous vehicles require software that is extremely sophisticated and highly secure.” Chen said their firm is very much poised to dominate the market for embedded intelligence in the cars of the future because of its exemplary innovation track record in mobile security and the leadership it demonstrated in automotive software.