Apple Inc. AirPods – unveiled back in September alongside two new iPhones – the 7 and 7 Plus – are the new wireless headphones that allowed the iPhone maker to make its devices slimmer and made room for a bigger battery. The new accessory became the subject of mockery, and the users were calling them ‘toothbrush heads’ and their containers ‘dental floss dispensers’. However, this gave an idea to some owners as to how they could protect them from theft.

It might sound funny, but it’s true that some AirPod users have begun creating stickers to deter would-be thieves from stealing their high priced accessory. There are several images of innovative ideas on Twitter that make AirPod case look like dental floss packaging.

Interested customers can avail the pre-designed stickers from Etsy that is selling each for $7.10. The price tag might seem high, but considering the cost of replacing a pair of Apple Inc. AirPods – $69 – it may be a bargain. The sticker is translucent, and has been specifically tailored to fit the AirPod case. It comfortably fits either side of the box, immediately turning the case into a much less desirable theft target.

However, the floss stickers are being shipped from Etsy within the US only. So, numerous users have taken matters into their own hands, and are coming up with alternative ways to achieve the same result. The users are now peeling off a sticker from an actual pack of floss, and placing it onto the AirPod case.

However, great ideas come with great risks as well. In this case, users might toss them in the trash without realizing that they are their $69 Airpods says Mashable.

Now, that the trick is out in the open, thieves will also need to become extra vigilant when it comes to lifting those floss dispensers. 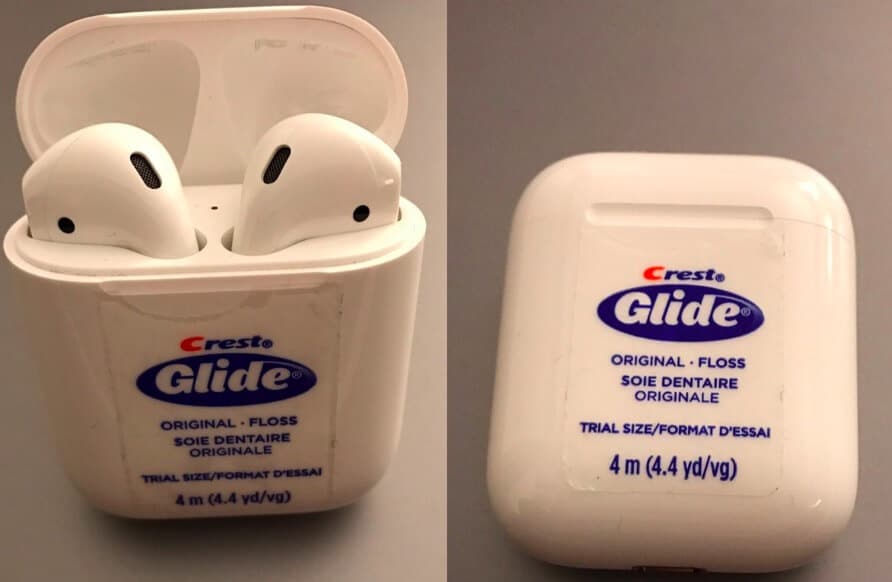 Other ways to keep you AirPods safe

Apple Inc. enthusiast crafted inventive ways to avoid losing or getting their precious AirPods stolen in the past as well. For example, earlier in December, Twitter user named Andrew Cornett devised an ingenious solution to keep his earbuds in place by sticking them inside his stretched ear piercings.

Keeping AirPods stick to the ears is the biggest problem with the AirPod design as they can be easily lost while jogging, or can be accidentally dropped in a toilet. The best solution to keep them safe is to buy a third-party accessory that adds a wire to it.