The company would issue convertible senior notes due 2028 to raise %750 million. It plans to grant the initial purchasers in the Notes an option to purchase an additional US$112.5 million.

However, it is yet to finalize the pricing and conversion price which it said would be based on market conditions.

This is the third time over the last year that Li Auto is raising capital. It went public in 2020 and raised almost $1.5 billion from the IPO in the US market and the concurrent private placement. The company priced its stock at $11.5 in the IPO and soared on the listing amid investors’ optimism over electric vehicle stocks.

Li Auto made a 52-week high of $47.70 but has since fallen over 46% from the highs. Other electric vehicle stocks including Tesla, NIO, and XPeng Auto have also tumbled.

Meanwhile, Li Auto used the spike in its stock to issue more shares in December 2020. It announced a follow-on public offering of ADS (American Depository Shares) priced at $29 per ADS. It offered 47 million shares in the offering and gave the underwriters an option to purchase an additional 7.05 million shares. The stock had tumbled after the offering was announced as it was at a significant discount to Li Auto’s then stock price.

To be sure, Li Auto is not the only electric vehicle company that has issued shares to raise cash over the last year. Tesla has raised $13 billion through three rounds of stock issuance in 2020. The massive capital raise has strengthened Tesla’s balance sheet and its cash holdings are now more than the debt on its balance sheet.

Tesla has also been on a money raising spree

Earlier this year, Tesla invested $1.5 billions in bitcoins as it apparently does not needs the massive cash pile for its organic business. While Tesla is investing in new plants it is also generating positive cash flows. Despite spending aggressively on new plants, Tesla generated positive free cash flows in 2020. Tesla’s CEO Elon Musk sounded positive that it would not need to raise more capital during the Q4 2019 earnings call. However, it ended up issuing shares thrice in 2020 in an apparent bid to capitalize on the surge in its stock.

NIO has also issued shares thrice over the last year. Chinese electric vehicle makers including Li Auto, XPeng Auto, and NIO are burning a of cash and the situation might not reverse anytime soon. Considering the increasing competition in the Chinese electric vehicle market, companies are strengthening their balance sheet to not only invest in growth and research & development but also survive the price war.

Meanwhile, Chinese electric vehicle makers also have a tacit backing from the Chinese government. Last month, Guangdong Yuecai Investment Holdings Co., Ltd, the investment arm of the Guangdong provincial government has invested $76.9 into XPeng. “The investment recognizes XPeng’s leadership position in the Smart EV industry in China and its strategy of developing proprietary R&D tailored for local customer needs,” said the company in its release. 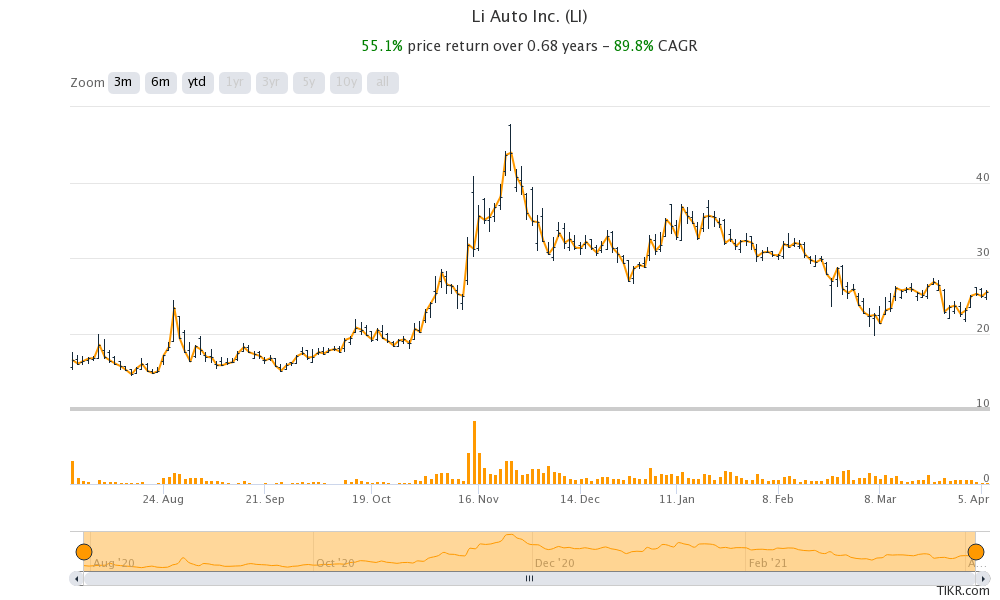 In 2020, when NIO was facing a survival battle, the Hefei Municipal Corporation invested in the company. The investment sent a sign that China was willing to go the extra mile to bail out a struggling electric vehicle company.

China sees the electric vehicle industry as a key growth area and it is part of the country’s “Make in China 2025” plan where it is focussing on advanced manufacturing and shed the country’s image as a producer of low-value goods. NIO, XPeng Motors, Li Auto are among the leading Chinese electric car companies

XPeng delivered 5,102 cars in March, a year over year rise of 384%. Its deliveries were also ahead of its guidance of 4,262 cars. Overall, it delivered 13,340 cars in the quarter which were 487% higher than what it reported in the corresponding quarter in 2020.

In percentage terms, XPeng reported the highest growth. However, in absolute terms, Tesla might have outsold domestic Chinese electric vehicle companies. Tesla does not provide the geographical breakup of deliveries in the release. However, according to data from China’s Association of Automotive manufacturers, Tesla sold 18,318 electric cars in China in February.

Overall, Tesla delivered 184,800 electric cars in the first quarter which was a year-over-year rise of 109%. It was a new quarterly record for the company despite the first quarter being seasonally weak. However, strong sales in China might have helped it achieve the feat.

Meanwhile, Li Auto stock was trading over 4% lower in US premarket trading today. The stock trades at an NTM (next-12 months) enterprise value-to-revenue multiple of 6.64x. Li Auto’s valuation has come down sharply over the last six months amid the sharp fall in its stock price.

You can trade in Li Auto stock through any of the reputed online stockbrokers. Alternatively, if you wish to trade derivatives, we also have reviewed a list of derivative brokers you can consider.