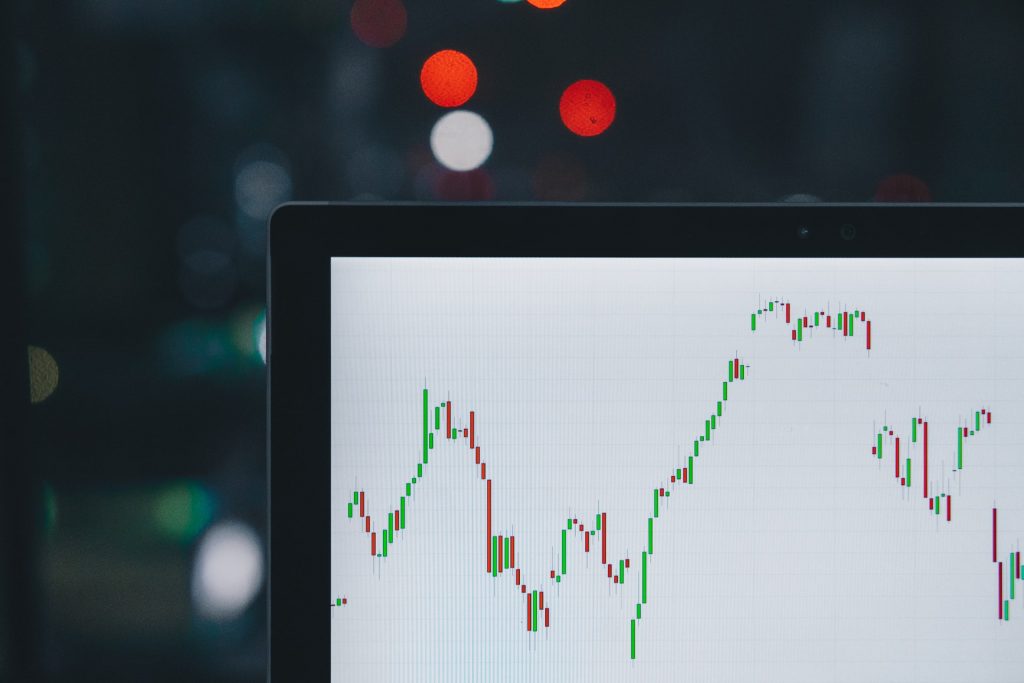 There has been a sell-off in growth names and almost all the SPACs (special purpose acquisition companies) have fallen hard. Social Capital Hedosophia Holdings (IPOE), a SPAC sponsored by Chamath Palihapitiya has also fallen sharply but has recovered from the lows.

IPOE will merge with fintech company SoFi. It has kept 27 May as the voting date to approve the merger. The merger is expected to complete on 28 May and beginning next month, the merged entity would start trading under the new ticker symbol “SOFI.”

SoFi released its first-quarter earnings recently which showed that its revenues increased 151% year-over-year to $216 million while it posted an adjusted EBITDA of $4 million in the quarter which was an increase of $70 million over the corresponding period in 2020. It is the first profitable quarter for the company. While announcing the merger of IPOE with SoFi, Palihapitiya had said that he expects the company to turn profitable on the adjusted EBITDA level in 2021 and the margins are expected to rise to 32% by 2025.

In 2021, SoFi is expected to post revenues of nearly $1 billion. Looking at the strong first-quarter performance, the company looks on track to deliver the projections for the year.

IPOE has fallen sharply from the highs

Notably, IPOE and other SPACs sponsored by Palihapitiya have underperformed in 2021. Apart from the sell-off in growth names, SPACs, and fintech stocks, the allegations against Clover Health that merged with one of Palihapitiya SPAC also weighed heavy on IPOE stock.

Clover Health went public through a reverse merger with Social Capital Hedosophia Holdings III (IPOC). IPOC was the third SPAC from Chamath Palihapitiya. He has already taken Opendoor and Virgin Galactic public with two of his SPACs.

In its allegation, Hindenburg Research said “Clover has not disclosed that its business model and its software offering, called the Clover Assistant, are under active investigation by the Department of Justice (DOJ), which is investigating at least 12 issues ranging from kickbacks to marketing practices to undisclosed third-party deals, according to a Civil Investigative Demand.” All of Palihapitiya’s SPACs including IPOE tumbled after the allegations.

IPOE has recovered from the lows

Hindenburg, which has previously targeted companies like Nikola and Kandi Technologies also, also accused Palihapitiya and questioned his due diligence in selecting the merger target.

Meanwhile, IPOE seems to have put the baggage of Hindenburg allegations behind. Other Palihapitiya SPACs have also recovered amid the spike in beaten-down growth names.

Meanwhile, the fall in IPOE and other SPACs shows that the SPAC bubble has burst. In 2020, the total number of money that was raised through blank cheque companies was $83 billion according to SPACInsider. The total money that was raised through IPOs was $174 billion according to FactSet. For the first time in history, SPACs challenged the dominance of traditional IPOs.

If 2020 was a splendid year for SPACs where they raised more money than in the previous ten years combined, 2021 is turning out to be even better. According to SPACInsider, there have been 325 SPAC IPOs so far in 2021 and they have raised over $103 billion. The amount exceeds the money raised through the traditional IPO by a wide margin. However, new SPAC IPOs have dwindled down from the first quarter when the IPO calendar was filled with the blank cheque companies. 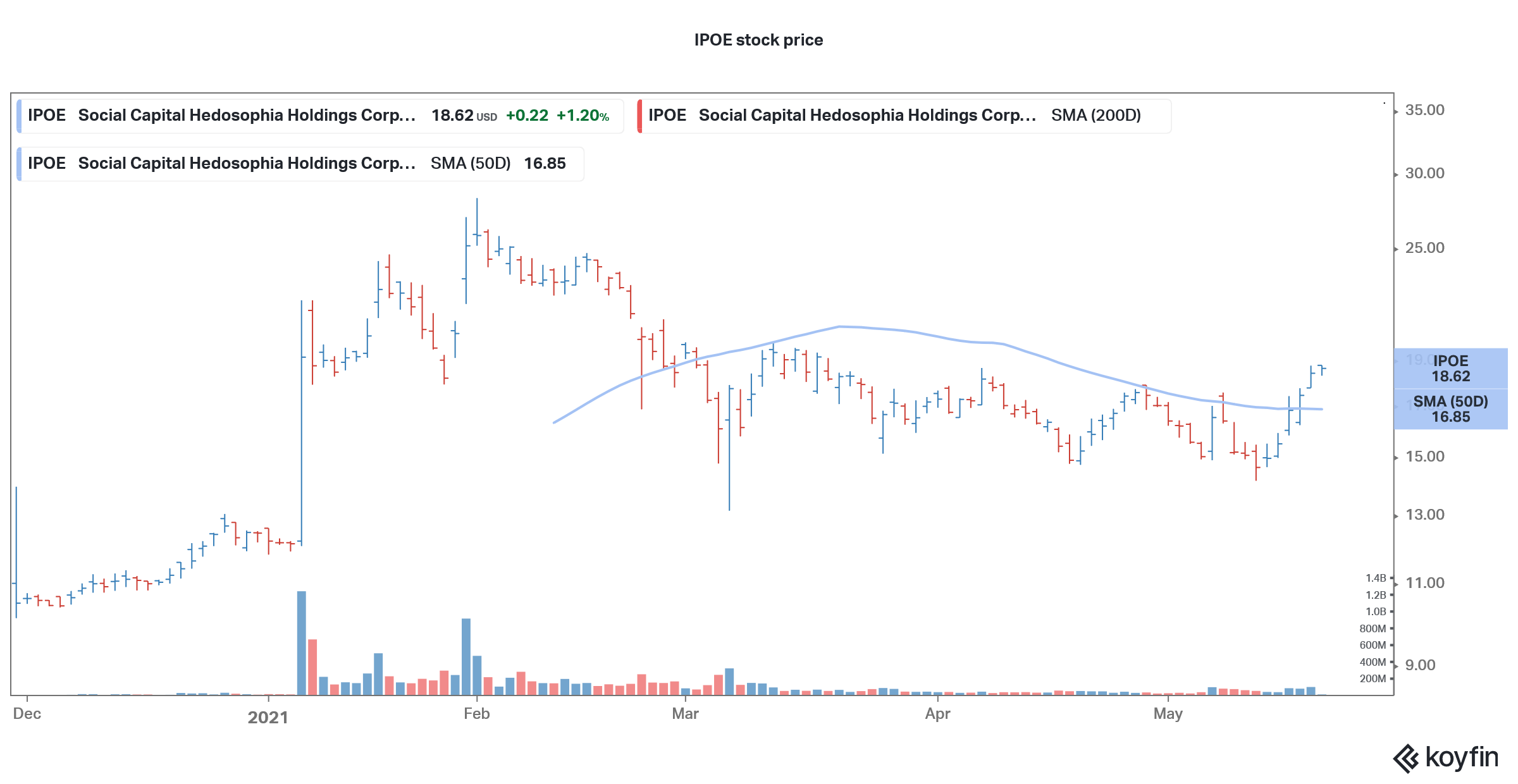 There are multiple reasons why SPACs are gaining popularity. Firstly, they are a much easier way to raise capital unlike traditional IPOs, and also are less time-consuming. The costs for a SPAC are much lower than IPOs where underwriters get a handsome fee. But then, even the SPAC sponsor makes a killing by getting shares at nominal prices.

Secondly, the regulatory environment is very lax for SPACs as compared to traditional IPOs. In a SPAC merger, the companies can provide forward projections which are not allowed in an IPO. Looking at the CCIV-Lucid Motors merger, the company has provided projections as far as 2030 where Lucid Motors expects to have an annual run rate of half a million cars. Incidentally, that is where Tesla was in 2020 and it prompted some analysts to project that in ten years Lucid Motors would be where Tesla stands today. IPOE also provided projections until 2025.

SoFi looks like a good merger target for SoFi

Finally, the SPAC merger is a good way to go public for little-known companies that otherwise would not get much traction in a traditional IPO. SPAC investors rely on the sponsors to identify these “hidden gems.” Indeed, some of the SPACs have identified good merger targets at an attractive valuation. For instance, SoFi looks like a good merger target for IPOE.

From the perspective of investors, buying a SPAC before the merger is like buying an IPO before the listing. Most of the SPACs have delivered strong returns after they made the merger announcement. The mania to buy these companies before the merger smells of a FOMO (fear of missing out). But then, there are many other sectors especially the green energy ecosystem where FOMO has led investors into buying stocks even at elevated valuations

But things are now changing with the SEC now tightening regulations for SPACs. Some of the companies like Roblox and Coinbase went public through a direct listing that does not needs underwriters as in a traditional IPO.

IPOE stock was trading marginally higher in early US price action today. However, the stock is still down almost 35% from its 52-week highs.

How to trade in IPOE stock

You can invest in IPOE stock through any of the reputed online stockbrokers. You may also choose from ETFs that invest in IPOs of newly listed companies. The Renaissance IPO ETF outperformed the S&P 500 by a wide margin in 2020 reflecting the strong performance of IPOs. However, it is underperforming in 2021 amid the sell-off in newly listed companies most of which were growth stocks.